- October 24, 2020
The town of Beaconsfield, previously known as Brandy Creek, dates back to the late 1840s when small quantities of gold was discovered in the area. Commercial gold mining only got underway in the mid 1870s which led to a substantial growth in the settlement’s population. Brandy Creek was renamed Beaconsfield in 1879 in honour of Benjamin Disraeli, 1st Earl of Beaconsfield and British Prime Minister. By this time the reef was the richest gold discovery anywhere in Australia and virtually overnight Beaconsfield became Tasmania's third largest town. Two Anglican churches have been built at Beaconsfield; the present church replacing the original Holy Trinity built in 1878.

In late June 1878 the “Travelling Reporter” for Launceston’s weekly newspaper, the Tasmanian, provides an interesting glimpse of Brandy Creek, as it was still called, shortly after the opening of Holy Trinity Anglican church. The reporter arrived by ‘steamer’ from Launceston:

“Intending passengers and visitors to Brandy Creek after a pleasant trip of about four hours are landed at Swift’s Jetty, the nearest landing place, which is rather better that a mile and a half from the township. The road is scarcely more than a bridle track, and anything but a pleasant walk for pedestrians this time of the year, so much traffic making it very muddy. On reaching the township the traveller has not much bettered himself in respect to clean walking, for it is next to impossible to get about on foot from one house to another without getting over the boot tops in mud; a road is now being formed through the township….”

“The population of Brandy Creek is about 950. There are two hotels,… eight stores in the township, two bakers’ shops, three or four butchers, one temperance hotel, and a boarding house. Brandy Creek also boasts of two places of worship, viz., a Wesleyan Chapel and a Church of England, which has only lately been erected, and hardly finished. In the evenings it would be a very serious undertaking for the inhabitants to attend church, it being almost a moral impossibility to go outside the door after dark, without being stuck in the mud up to the knees…”.

As observed by the ‘travelling reporter’, the Anglican church was only partially built. In early June 1878, the Launceston Examiner reported:

“The whole of the materials for the chancel which is the first part of the Church of England building to be erected at this gold-field-have been forwarded, and that it will be so far advanced as to permit of its being used for service on Sunday, …We believe it is proposed that the part of the building now being erected may be used as a school-house, under the Board of Education, during the week, and until a separate building can be provided”.

The church was built on a site “given by Messrs. Richie and Parker” (who Launceston solicitors). The building was officially opened on Sunday 9 June by the Bishop of Tasmania, as reported by the Tasmanian Evening Herald:

“The new Episcopalian Church on the Brandy Creek goldfield was formally opened on Sunday last by his Lordship Bishop Bromby, assisted by the Rev John Dixon in the services of the day. The attendance was not so large as might have been expected on so interesting occasion there being only about 40 persons present, in the morning service, but more than double that number in the evening, as some could not gain admission….The Rev Thomas McDowell, accompanied by the choir from Georgetown, came over and assisted very materially at the evening service. In future service will be held at the church each Sunday morning. A collection was made at the morning service in aid of the building fund of the church, and a sum of £6 was contributed, but in the evening no collection was made. This caused some disappointment, as the majority of those present had attended prepared to contribute something towards the building fund”.

No description of the original church appear in any of the 1878 reports of the building’s opening. Clearly it was a simple structure as in 1881 improvements to the building were made which were described as “extensive additions”. The church was closed for a period while alterations were made and it was reopened on Sunday 28 August 1881 by Archdeacon Hales of Launceston. The photograph of the church used in this article would be that of Holy Trinity after its enlargement in 1881 and was possibly taken at the time of the church’s official reopening.

The activities of the Holy Trinity are well recorded in local newspapers over the next two decades but one report from 1889 provides an interesting glimpse into the rough and tumble of life on the goldfields:

“The Church of England fence fronting on Weld-street has lately been painted and repaired. A few evenings ago some vandals amused themselves by pulling the battens from the fence and throwing them about. A day or so later a tar brush was used, and tar smudged all over the fence, defacing the paint. Now, considering that the church people had great trouble in getting funds together for the purpose of renovating the church and fence, it is really too bad to find their work partly undone by street ruffians and guttersnipes. A respectable female member of the Church of England was passing along the street the other evening after dark, and was jostled by a gang of gutter-snipes and pushed off the path, nearly falling. A prosecution will not follow, because the husband of the victim is engaged in business, and fears that he might offend some of his customers, whose sons the offenders might be….”.

While Holy Trinity was substantially enlarged in 1881, the church proved inadequate and it was replaced by a new church on the same site on Weld Street in 1907. This church will feature in a soon to be updated article on ‘Churches of Tasmania’. 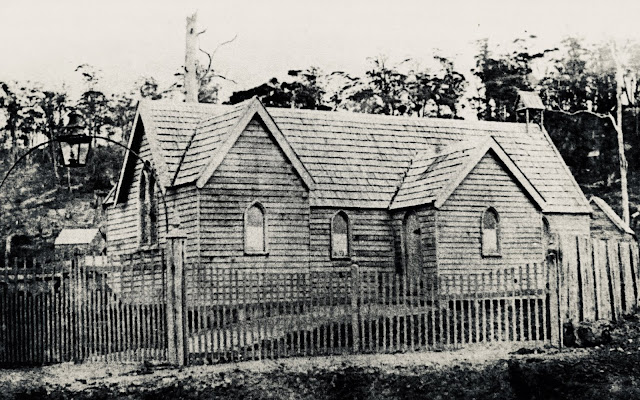 Holy Trinity - the photograph was taken some time after the church was renovated and enlarged in 1881. source: Grubb Shaft Museum Collection, QVM. 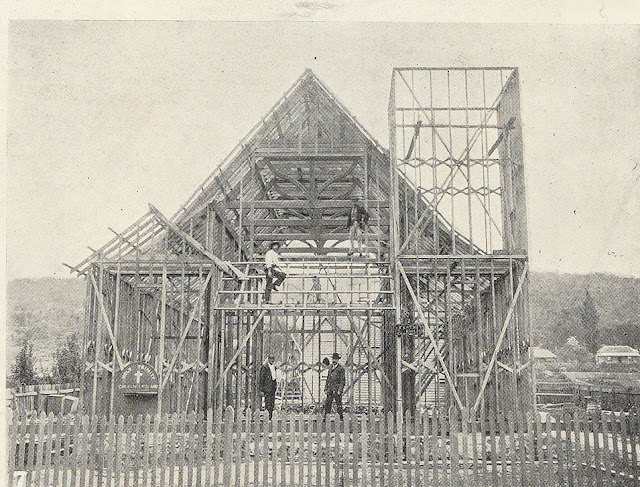 The new Holy Trinity under construction in 1907 (Weekly Courier) The original church which was shifted to the rear of the site and reorientated, can be glimpsed through the timber framework of the new church.