- October 30, 2020
Sorell is one of Tasmania's oldest towns with the Pittwater district being settled in 1808. Sorell was formally established as a township in 1821 and was thereafter named after William Sorell, who served as Lieutenant-Governor from 1816 to 1824.

In 1820 church services at Pittwater were held in a barn. After a school was built in 1821, a schoolroom was used as a place of worship. Reverend Robert Knopwood conducted the first divine service at the Sorell school in February1822.

The story of the establishment of St George’s at Sorell is recounted in an article published by the Hobart Mercury in August 1925, on the occasion of the church’s centenary:

“In consequence of the progress of the Pittwater settlement it was deemed advisable to secure a piece of land for a cemetery, and on March 7, 1823, the Rev. Samuel Marsden paid a visit for that purpose, under instructions from the Lord Archbishop of Canterbury, and consecrated a suitable area. Previous to this all persons dying in the district were buried in St. David's Cemetery, Hobart Town”.

“The agitation for a resident chaplain at Sorell began on June 9, 1824, when pressure was brought to bear upon Lieutenant-Governor Arthur, but it was not until June 10, 1825, that the Rev. Wm. Garrard and his wife took up their residence there, and Mr. Garrard assumed charge of the parish, which extended from Pittwater to Richmond, Jerusalem (now Colebrook), and the East Coast up to Bicheno”.

“Lieutenant-Governor George Arthur, … laid the foundation-stone of St. George's Church, Sorell, on August 8, 1825, in the presence of a large assemblage of residents of the neighbourhood….In 1827 Mr. Addison handed over the church as finished, but it was not till May 7, 1828, that it was consecrated by the Ven. Archdeacon Thomas Hobbes Scott, the first Archdeacon in Australia, in the presence of Lieutenant-Governor Arthur…”.

“The site on which the church building was erected was given by the Government, who supplied the men and materials for its construction, the expenditure being estimated at £1,450. It was built to accommodate 600 persons, having galleries on three sides for the accommodation of prisoners on muster days. Although provision was made for the installation of a clock in the church, and a requisition was sent by the Lieut. Governor on May 20, 1827, to the Under-secretary of State for six bells and six clocks for the various churches constructed or under construction, one of each being especially specified for Pittwater, the clock never reached Sorell…”.

Soon after the church opened it became apparent that it had been poorly built and problems with the foundations became the source of ongoing and expensive maintenance As early as 1831 tenders were invited for repairs to the roof and again in 1833 for further extensive repairs to the building.

The building deteriorated to such an extent that in 1874 a decision was made to demolish the church and rebuild it. In January a meeting was held in the Sorell Council Chambers, which was attended by the Bishop of Tasmania, Charles Bromby, and leading members of the Anglican community. The record of the meeting reveals that apart from the church’s serious structural problems, the building had never been suitable for the needs of the community. In his opening address the Bishop made his thoughts about the future of the building clear:

“There was no reason why the people of Sorell should not have a church suited to their wants, in which they could meet for the worship of their Maker. There was no disguising the fact that "the house of God at Sorell was now in ruins;" and the question they had to consider was, what was the remedy? Various suggestions had been made. One was, that the present building be repaired; …. By the adoption of this plan, the inclined walls might be braced into their perpendicular, and internal alterations effected; but, at best this would be a piece of patch work, which would last but for a time”.

The alternative, said Bromby was:

“…To take down the present building, utilise the material, and erect a new and smaller church. If this could be done, as some imagined it could, at a moderate cost, he would strongly recommend it. The present building was too large, and the congregation were, as a consequence, too scattered. …”.

Responding to the Bishop’s address, Charles Hazell led a discussion to formulate a resolution to determine the church’s fate:

“He had listened with pleasure to the Bishop's address, which contained all that could be said on the object for which they were met. For his own part, he did not believe in patch-work. He was in favour of the old church being taken down, and a new one built. The present edifice was not only unsafe, but it was altogether too large. This had a chilling effect, which was very undesirable in any place of worship, where the congregation should heartily and warmly take part in the services of the church. He believed a new building quite large enough for their wants, could be put up for very little more than it would cost to repair the present one; and he thought the people of the district would not be behind-hand in their efforts for such a purpose….”.

In the ensuing discussion one speaker remarked:

“The present edifice was not only unsafe, but a standing disgrace to the members of the Church of England, who were the wealthiest men in the colony, and however much a man whose family might be dependent upon him for support, might be disposed to go, to worship, unless his life were insured, it would be positively hazardous to enter St. George's on a stormy day”.

At the conclusion of the meeting a resolution was passed to have the church demolished and rebuilt. However, some time was to pass before this was put into effect. In 1879 the church was pronounced unsafe and the Sorell Presbyterian Church was offered and accepted for use as an Anglican place worship until the new church was built.

In 1883 to old church was dismantled and the foundation stone of the new building was laid on October 23, 1883, on the same site as the original building. The history of the second St George’s will be recounted in a future article on ‘Churches of Tasmania”. 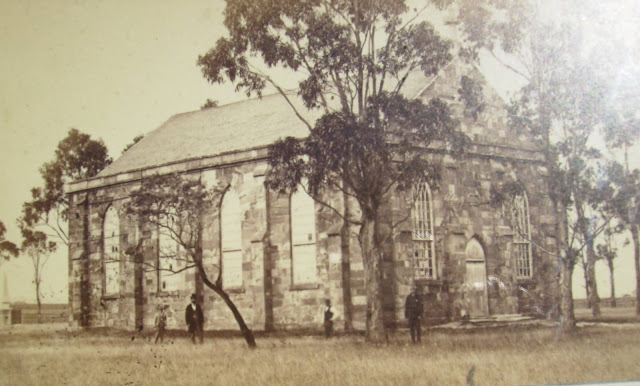