- November 06, 2020
In the 1870’s the discovery of large deposits of cassiterite led to the founding of the township of Brothers’ Home on the Ringarooma River in north east Tasmania. It 1885 the settlement was renamed Derby and by the close of the 19th century its population peaked at around 3000. In 1876 various tin mining leases, including the ‘Brothers Mine’, were amalgamated as “The Briseis”. The Briseis Tin Mining Company dominated the town until the great flood of 1929 when the Briseis Dam burst, devastating the town and inundating the mine. Neither the town nor the mine fully recovered from this disaster.

At its peak, four religious denominations had a presence in Derby, including the Salvation Army, which opened a hall in 1913. Catholic, Methodist and Anglican churches had been built by the early 1890s while the Salvation Army had been content to use the town hall as a place of worship for almost 20 years.

The Salvation Army first appeared at Derby in June 1887. In that month Derby’s local correspondent for Launceston’s Daily Telegraph reported:

“We are to have a visit from some members of the Salvation Army on Friday next, who have engaged the Town Hall, and are likely to have a good attendance, being their first visit here”.

The meeting was evidently successful and appears not to have attracted disruption by larrikins as was common practice at ‘Army’ meetings in Tasmania’s larger towns. By 1889 the Salvation Army had established a permanent base at Derby. In March 1889, The Colonist reported:

“A contingent of the Salvation Army is stationed here, two lasses now being with us. Services were held in the Town Hall during Sunday last, and were well attended. Mrs Bennett, from Launceston, who is a favourite here, conducted the services”.

In February 1912, the local corps received permission to build a hall and £50 was donated from the Salvation Army’s general fund towards the cost of the building.

The new hall was officially opened on Saturday 15 March 1913, a date which coincided with the 24th anniversary of the Salvation Army’s establishment in the town:

“On Saturday afternoon Brigadier Holdaway, in charge of the Salvation Army in Tasmania, accompanied by Captain Knight and Lieutenants Carmichael, Fox, and Edwards, performed the opening ceremony in connection with the new hall built at Derby. A large crowd witnessed the ceremony. The Army has for the past 24 years been holding their services in the Town Hall, Derby, and a movement was made some twelve months ago to construct a building of their own, with the result that they now have one of the nicest halls in the state. The dimensions are 32 x 20, with walls 12ft. high. The building cost about £302. Seating accommodation is provided for 100, with a platform which will seat some 20 more. An anti-room 10 x 10 is attached to the building”.

“Speeches were made by the officers present and Messrs. Chas. Lucas and J. C. Farrell, the council clerk. The contractor (Mr. G. A.Rodman) was complimented on the work done by him. In the evening a concert was held, the hall being well filled. A musical programme was carried out. On Sunday services were held, and on each occasion a large number of residents were present. On Monday evening, at 6.30, about 200 townspeople sat down to a splendid tea. The tables were nicely decorated for the occasion. To wind up the proceedings a concert was held, and prior to the commencement the Derby Brass Band, under the bandmaster, Mr. C. West played several selections in front of the hall. Collections were taken at most of the services, the proceeds being large”.

Following the 1929 flood, Derby’s population plummeted. A little over a decade later the local corps ceased operations and the hall closed. In 1947 the building was taken down and reconstructed as a new Salvation Army Hall at Sandy Bay south of Hobart. Although it is no longer used a hall, the building still exists and has been converted into a house. 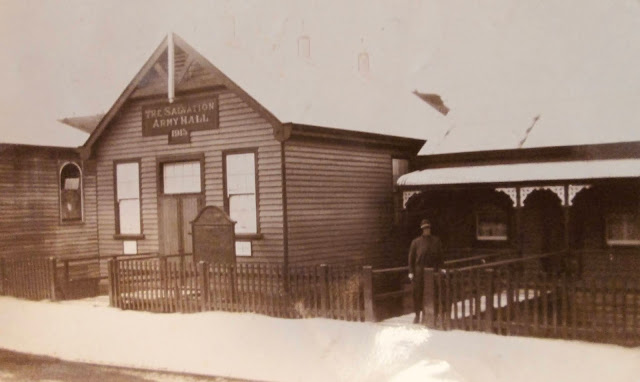 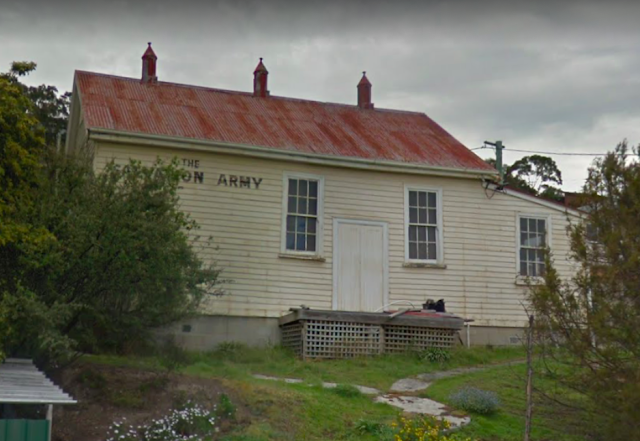