- November 10, 2020
Churches and chapels have been established in almost every form of public institution including gaols, hospitals, retirement homes, schools, universities, convents and military camps. In Tasmania at least seven chapels have been established within public and private hospitals. This article will focus on the historic chapel at Calvary St Vincent’s Hospital, Launceston.

Many private hospitals in Australia were founded by religious orders. St Vincent’s was established by the Sisters of Charity, an Irish Catholic Order which arrived in Australia in 1838. In addition to their usual vows of chastity, poverty and obedience, the Sisters of Charity also took an extra vow of service to the poor which saw them earn the name of the ‘walking nuns’ due to their work on the streets with people in need. The Sisters of Charity came to Tasmania in 1847 and worked in numerous places including jails, asylums and the Hobart Female Factory. They later became active in a number of Tasmanian institutions including St Joseph’s School in Hobart (as well as St Joseph’s Orphanage), St Joseph’s Child Care Centre in Taroona, St Francis Xavier’s School in South Hobart, Mount Carmel College in Sandy Bay, St Aloysius Catholic College at Kingston, St Brigid’s School in New Norfolk and St Vincent’s Hospital in Launceston.

“The new hospital will be of a most substantial character. It will be built of concrete, and, standing, as it will, upon sloping ground, will be four storeys high in front and three at the back. Reinforced concrete has been specified through-out. Staircases, corridors, and even the, verandah posts will be of this material, so that the building will be fireproof…. All through the plans show that the arrangements are based upon the latest and most approved ideas of hospital requirements, and every detail in equipment will be carried out in the most efficient style….A special feature will be a "sun room," 45ft. long, upon the first floor, while the top storey will afford a "shelter" for such cases as call for open-air treatment. A hydraulic elevator large enough to take a bed is to be installed, while the heating will be effected by a hot-water system. …St. Margaret's will make no pretence to any architectural style. Both externally and internally everything will be plain, in order to avoid giving encouragement to the lodgement of dust and other objectionable matter…No expense is being spared, and the contract runs into a good round sum”.

In 1930 the hospital was purchased from Dr Ramsay by a group of “nine Launceston medical men”. Then in 1944 it was purchased on behalf of the Sisters of Charity following a large bequest made by William Coogan, a former mayor of Launceston. Archbishop Tweedy encouraged the Sisters saying that the hospital represented “far more effectively than the greatest cathedral the nobleness and greatness of the Catholic faith”.

The official reopening of the hospital took place on Sunday 6 August 1944. The Examiner reported:

“A crowd of nearly 2000 gathered in the hospital and adjoining grounds. Dr. Tweedy said he was happy to welcome the Sisters to Launceston, and to the hospital, which in accordance with the Sisters' tradition was officially named St. Vincent's. The Sisters' arrival in Launceston to conduct a hospital marked the 14th hospital which was under their control, as well as many other institutions….. “Tasmanians know very little of the work of the nursing nuns, but thousands of persons in Hobart and Southern Tasmania have seen the wonderful work done by them at Calvary Hospital. It is not only the efficiency of the nuns' hospitals that achieve success, it is the spirit of charity which guides them,” said Dr. Tweedy. Catholic hospitals were not money-making concerns, but were charitable institutions in the service of the world. Sisters laboured under great financial burdens, but were prepared to accept further work wherever the need was. They were given three years of spiritual training before becoming nurses in the community”.

"The doors of St. Vincent's Hospital are open to all without exception,” Dr. Tweedy paid a tribute to the late Mr. W. Coogan, who left a bequest to the Sisters to provide a Roman Catholic hospital in Launceston…. "

As with most hospitals run by religious orders, a chapel was established at St Vincent’s for use by patients, visitors, the Sisters and the Franciscan at Trevallyn who served as chaplains. The chapel was originally located in an upper floor of hospital but has been relocated to the former children’s ward which was on the ground floor of the original St Margret’s Hospital.

A feature of the chapel are its stained glass windows. On either side of the sanctuary a pair of windows depict Mary the Mother of God (on the right) and St Joseph on the left. A circular stained glass window above and behind the Altar, depicts the Holy Spirit in the form of a dove. This window was originally in the chapel of St Joseph’s Orphanage in Harrington Street, Hobart, which was demolished in 1970. A white marble sculpture of the Last Supper, in front of the Altar, also came from St Joseph’s.

Further examples of stained glass are found at the chapel’s entrance. These were taken from the original convent building, also owned by Sir John Ramsay. The chapel has many other interesting features which can be seen in the photographs accompanying this article. 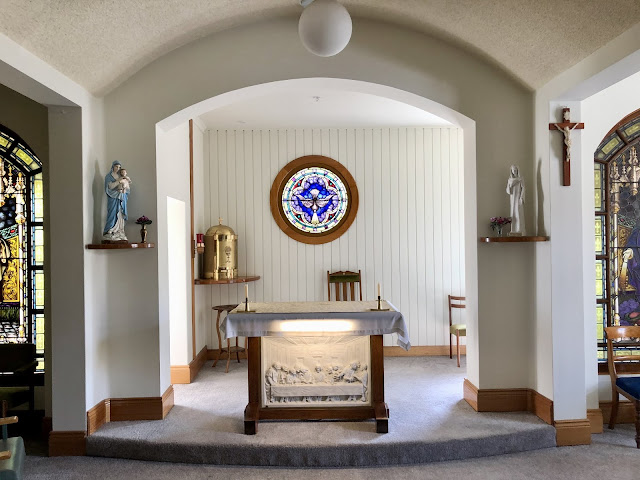 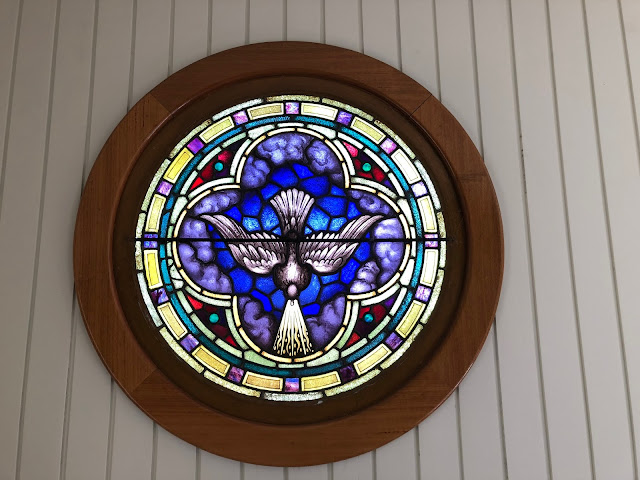 The circular stained glass window behind the altar was originally in the chapel of St Joseph's
Orphanage Hobart. 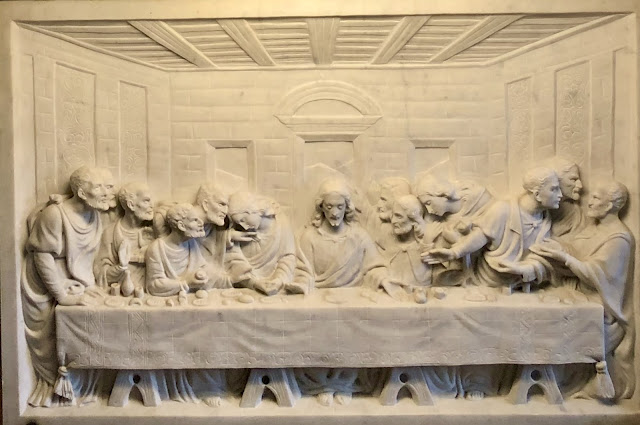 The plaster frieze on the altar as originally in the chapel of St Joseph's Orphanage Hobart. 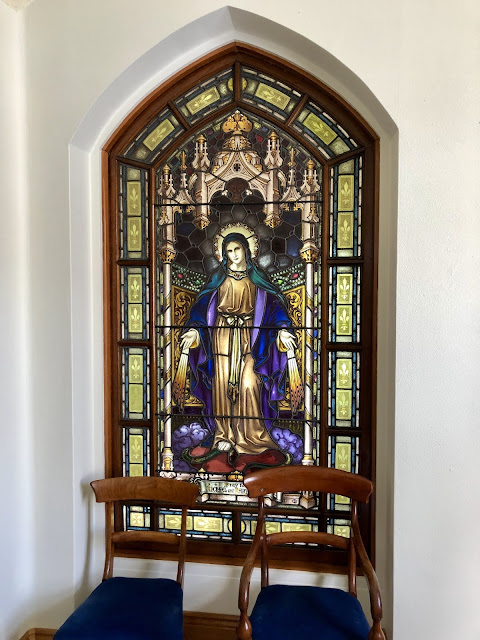 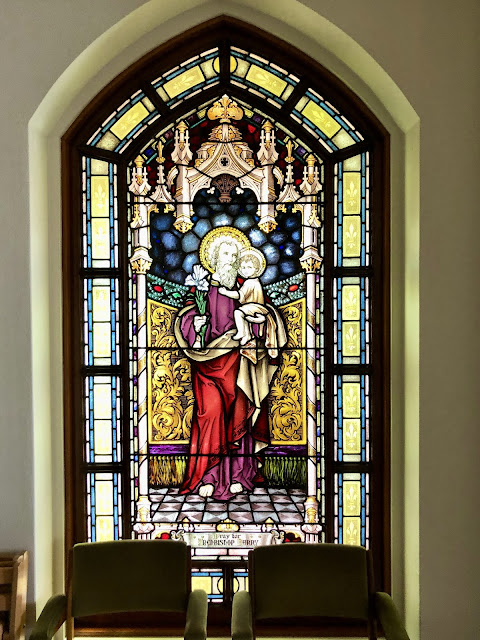 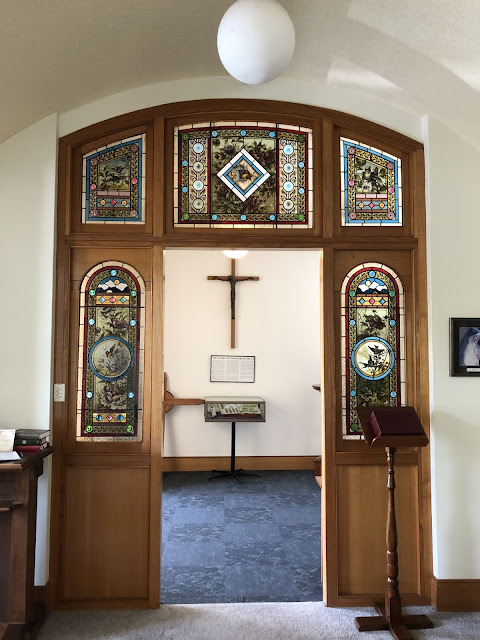 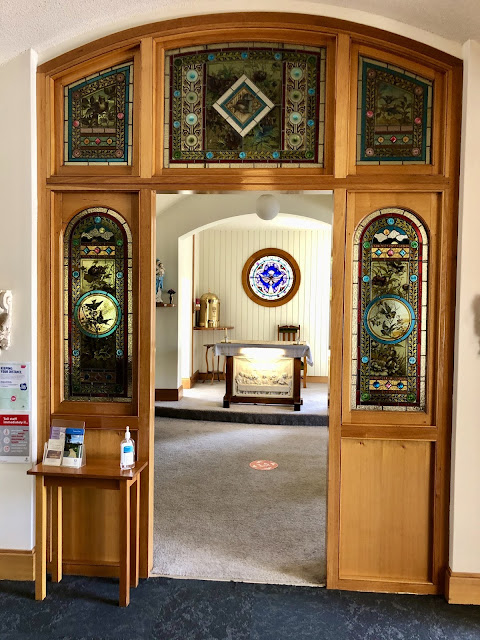 Entrance windows from the house, later the convent building, also owned by Sir John
Ramsay, relocated to the chapel 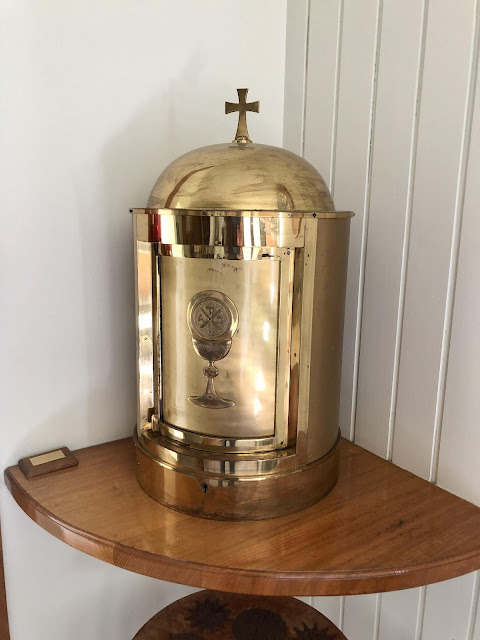 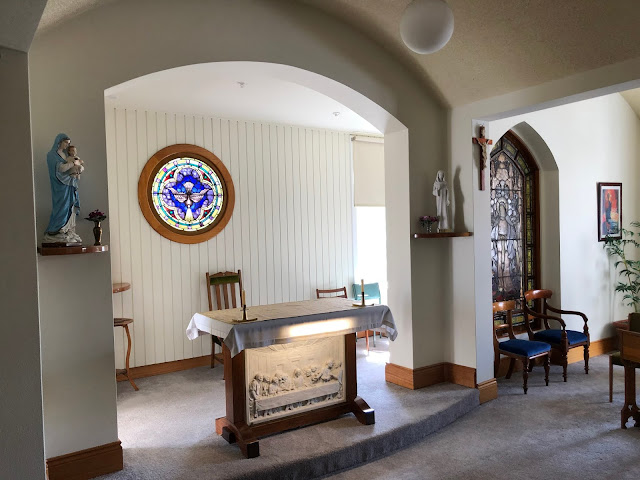 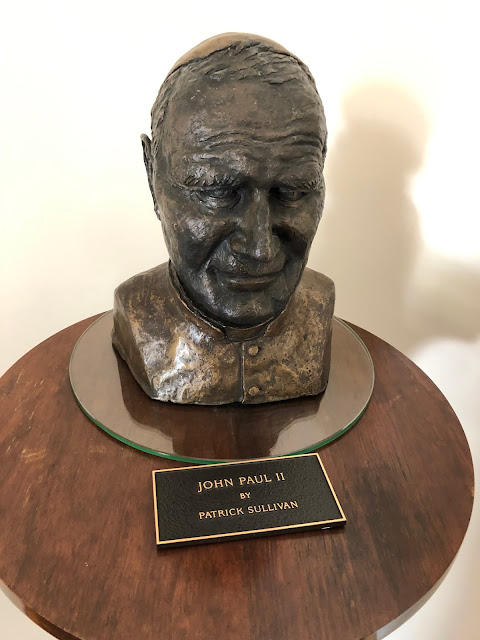 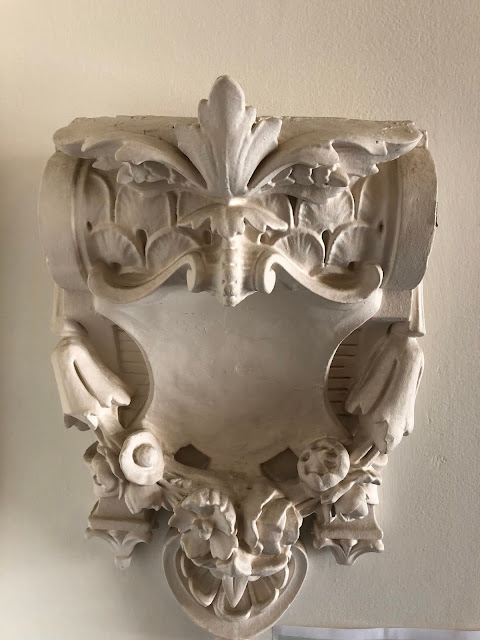 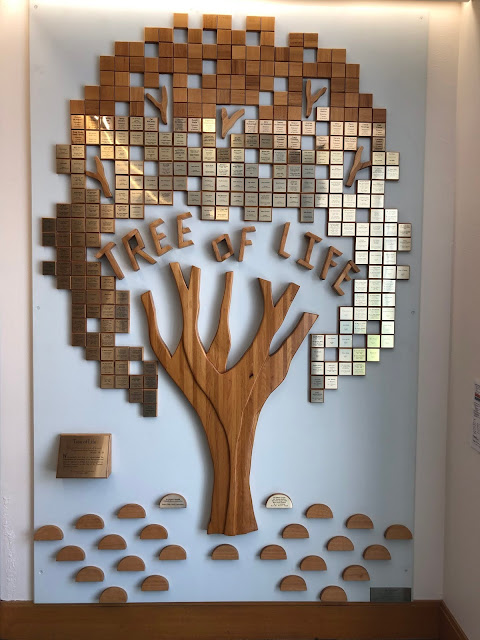 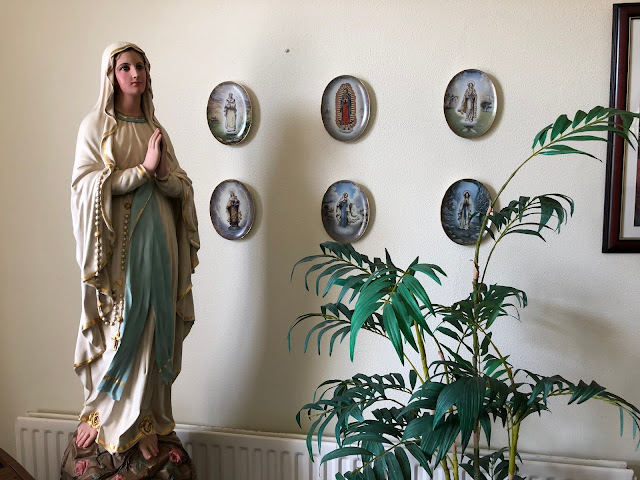 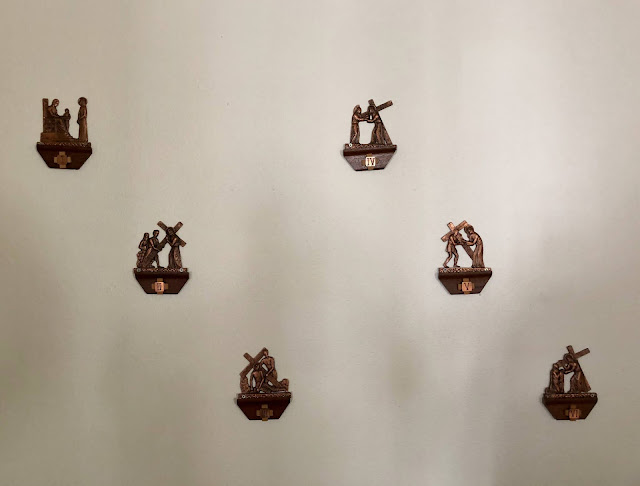 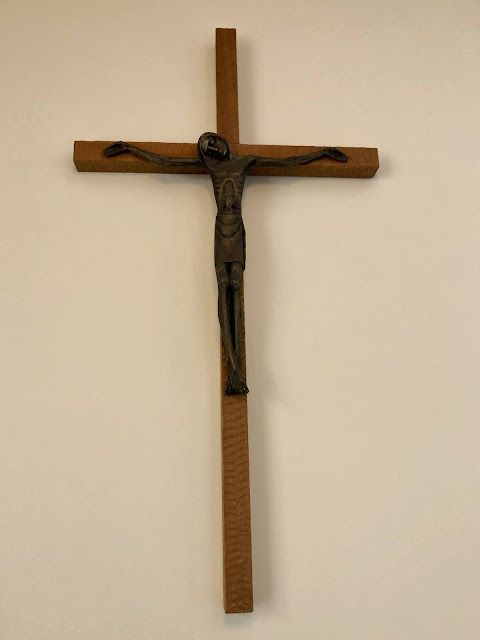 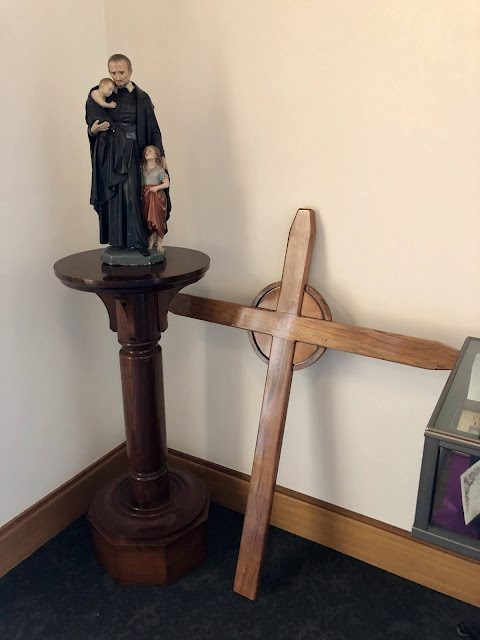 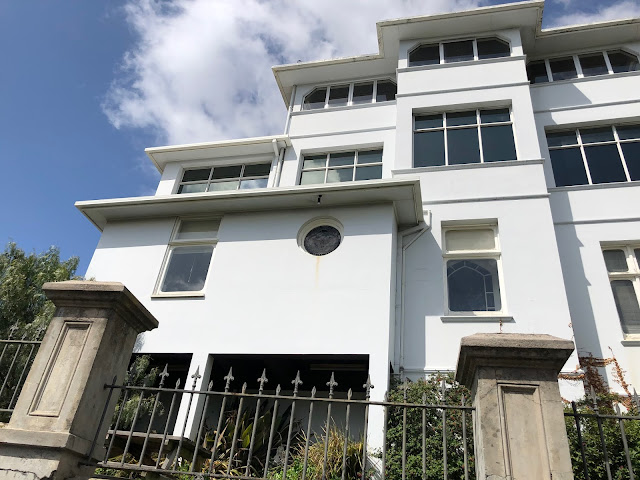 The chapel window seen from the exterior 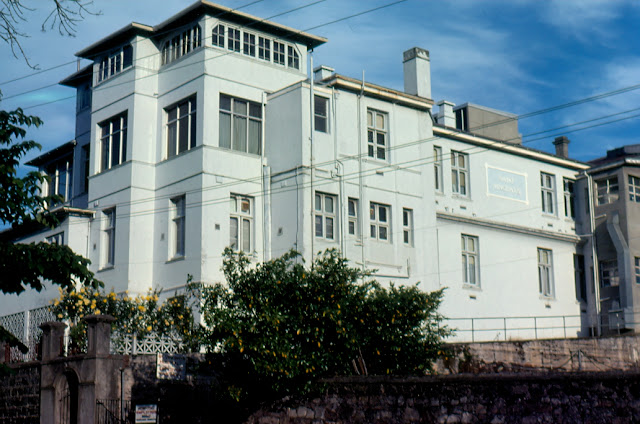 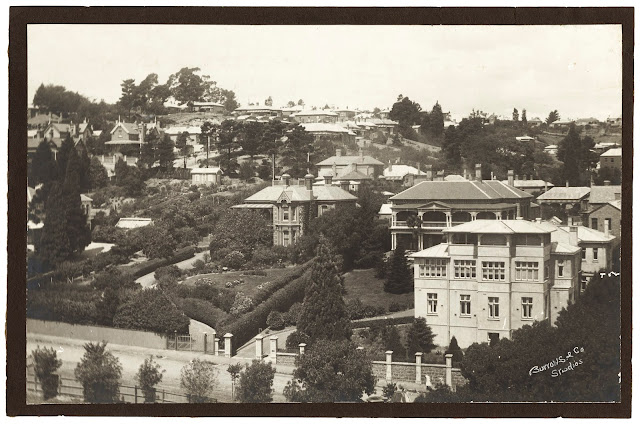 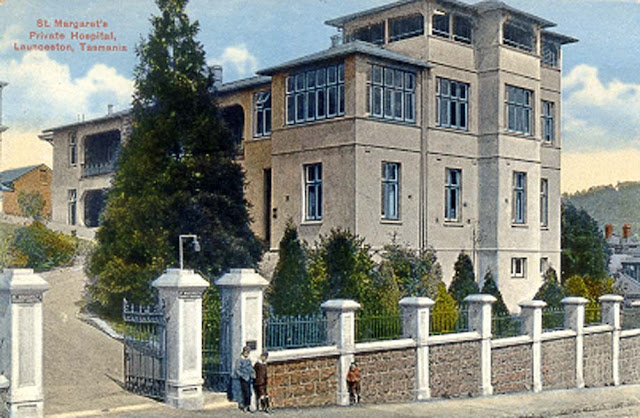 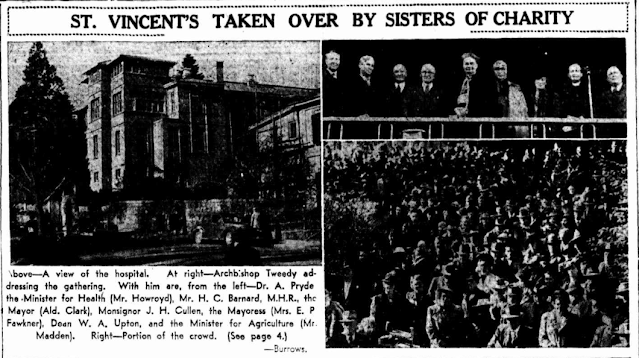