- December 07, 2020
Rosevale is a rural settlement about 25km west of Launceston. Rosevale was previously known as Bridgenorth but was renamed in honour of local landholder, James Rose. The establishment of the 'Bridgenorth State school' some three or four miles away gave rise to some confusion prompting the adoption of the name Rosevale. James Rose arrived in Tasmania in 1854 to work for Robert Quayle Kermode of Mona Vale. He later left his service and purchased 200 acres of land at ’Bridgenorth’. Rosedale once had three churches, a Congregational church [1870]; a Gospel Hall built in 1876 and All Saints’ Anglican Church [1924].

The establishment of a Congregational church in 1870 brought an end to Rosedale’s “spiritual and intellectual destitution”, at least according to the Congregational Union and Mission of Tasmania:
“This locality (now called Rosevale) is on the West Tamar, some sixteen miles from Launceston, in the midst of a thickly timbered country. It is almost impossible to conceive of the spiritual and intellectual destitution that had previously prevailed there. Many of the young folks had grown up in great ignorance, and some of the people stated that they had not seen a minister of God for several years….”.

The establishment of a Gospel Hall at Rosevale several years later was not universally welcomed and reflects divisions within the small community. The hall was opened on Sunday 5 March 1876 by Reverend Richard Smith. Reverend Smith was a former minister of the Church of England at Table Cape, who had resigned earlier in the year “with a view to entering on more enlarged evangelical work” with the Christian Brethren.
The circumstances leading up to the building of the Gospel Hall are not clear but meetings had been held in Mr Rose’s house from July 1875 after “evangelists” were invited “to visit the district”. The reason for this appears to have arisen due the infrequency of religious services at the Congregational chapel. Visiting evangelists has attempted to gain permission to use the Congregational chapel with no success which led to the construction of the Gospel Hall in close proximity.

Several residents of Rosevale wrote to Launceston’s newspapers presenting competing versions of the events that divided the two religious communities. Mr Stephen Cheek, a former school master and a supporter of the “evangelists”, claimed that Rosevale had been neglected by Congregational ministers. Cheek asserted that permission had been sought for a visiting evangelist to use the chapel for Sunday services but this had been rebuffed:

“The answer to this application was a command to 'drive him (the Evangelist ) out of the district, not listen to his preaching, and tell the people to keep clear of him. Subsequently a chain and padlock were put on the gates at the chapel yard, and it was then, being locked out of the chapel they had erected by great efforts that the people decided upon the erection of a hall, to which any Christian worker, regardless at denomination, will receive a cordial welcome…”.

Countering this view in a letter written to The Tasmanian, a supporter of the Congregationalists, H. Neville, claimed:

“With, respect to the gate being locked, I may add I have departed friends buried in the chapel yard, and the pigs had damaged the graves. I promised to repair the fence if the gate could be kept shut through the week. For this reason the lock was put on the gate…”.

The people who built the [Congregational] chapel are still in the district, worship in it still, and if they….had been told, to drive that Satan out of the district and obeyed, it would have been a great, blessing to the people, of Rosevale…”.

Another correspondent using the nom de plume “NO BIGOT” complained:

“Where peace and harmony prevailed there is discord and strife; the hall is built so close that if services were carried on at the same time it would not be pleasant… it would be far better and more God-like if these Evangelists would seek a sphere of work in those parts of our colony where no means of grace existed….”.

The last word on the matter came from the Cornwall Chronicle itself which in a succinct paragraph headed “TO CORRESPONDENTS” offered the following advice:

“The public have heard quite enough about the Rosevale religious embroglio. If Christian sects cannot work in harmony, they should at least endeavour to keep their differences from the eyes of the world”.

The embroglio seems to have left a considerable impression. Two years after the Hall opened a report in the Weekly Examiner noted that “the religious dissensions of the Evangelists [at Rosevale] seem to be dying out”. However, the activity of the Christian Brethren at Rosevale and neighbouring Bridgenorth continued for a while. In 1886 an advertisement in the Daily Telegraph announced that “Gospel services at Rosevale and Bridgenorth will be held as usual (fortnightly) in the Rosevale Gospel Hall, and cottage adjoining the Bridgenorth school-house”. The last mention of the Hall was made in the Launceston Examiner in 1888. 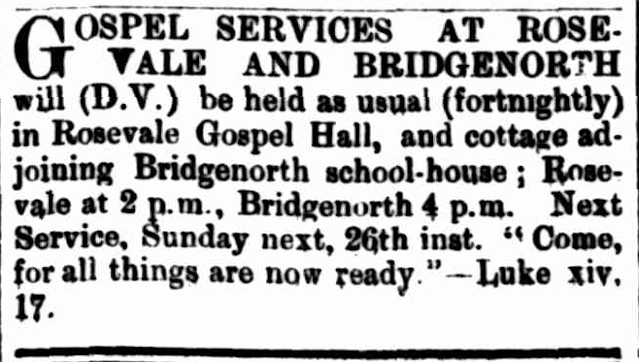 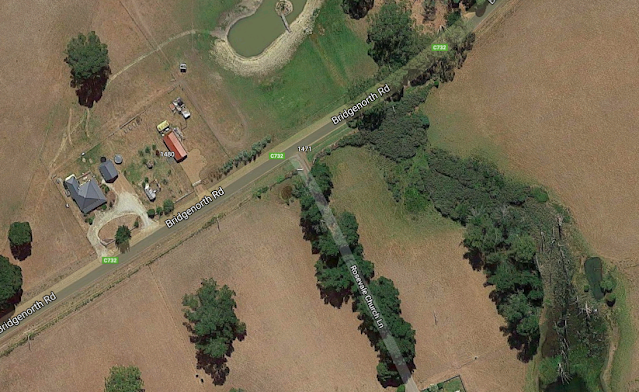