- December 19, 2020
Devonport was created in 1890 with the merging of two towns on the opposite banks of the Mersey River; Formby on the west bank and Torquay on the east bank. The area was first settled in the 1840s.

The Salvation Army arrived in West Devonport in 1890, only seven years after it had established bases in Launceston and Hobart. The public reception to the ‘Army’ in Tasmania was initially hostile and established churches and the middle-class were wary of its disruptive proselytising. The raucous nature of the ‘Army’s’ open-air gatherings and street processions tended to attract the working classes and people on the fringes of society. In Launceston and Hobart, processions were shadowed by a ‘skeleton army’ that parodied its marches and disturbed its meetings; sometimes violently. In Hobart the leader of the ‘Army’, Captain Gallagher, as well as others, were imprisoned for breaching municipal by-laws but were released after the intervention of the Attorney General.

At Devonport the reaction to the Salvation Army was more tolerant although the familiar pattern of opposition from certain quarters was evident. The targeting of ‘Army’ meetings by the ‘larrikin element’ was less problematic and where meetings were disrupted they were usually swiftly dealt with by the Devonport police.

The story of the Salvation Army at Devonport began with members of the Latrobe barrack’s (founded in 1884) visiting the town in February 1890:

“The Salvation Army are trying to establish a corps here, some from the army journeying from Latrobe once a week, and hold services in Buck’s Hall”.

By late 1890 the ‘Army’ had become a familiar sight in Devonport activity recruiting members:

“The Salvation Army had a field day on our beach, and a meeting in the Town Hall at night, where the rowdy element caused a little confusion, one man being carried out of the hall”.

In September 1891 the ‘Army’ leased premises for a temporary ‘barracks’; evidently to the mild disapproval of the North West Post:

“Residents of Devonport are not likely to have visits from theatrical companies, until a a suitable hall has been erected, now that the Formby [Buck’s] Hall has been leased by the Salvation Army. An advance agent of a theatrical troupe was at the Mersey the other day, but when he discovered that the only place of amusement in the town was closed to him he had to proceed further along the coast”.

However, Buck’s Hall was not always sufficient for the ‘Army’s’ needs. In October 1891 the Tasmanian reported:

“The Army are having all the run at present. The Guards No.1 band has been here for three days, and their barracks not being big enough, chartered the Giblin Hall, which was crowded to excess both Sunday afternoon and evening, the services being conducted by Captain Stagg and Lieutenant Underwood… On Monday night they paid a visit to the Town Hall at East Devonport…”.

With the end of the Army’s year-long lease of ‘Formby Hall’ in September 1892, Mr William Buck, the owner of the hall, made some amends for denying West Devonport with a venue for popular entertainment. The North West Post reported:

“The building, which has been used as a Salvation Army barracks for the past twelve months, has again been thrown open to the public, and on the occasion of the reopening the proprietor allowed the [Devonport] band the use of the hall and provided the lighting gratis…”.

In February 1894 the Salvation Army opened new barracks in Stewart Street. The new premises were clearly small because the Army also used the old Stewart Street ‘Protestant Hall’ which the Baptists had purchased in 1889. Due to the lack of a permanent pastor, Baptist services ceased until January 1897, enabling the Army to use the church premises for significant events. Thus in March 1895 the Daily Telegraph reported:

“The Salvation Army organisation, which seems to adapt itself to all conditions of modern life,….has been holding a harvest festival in the Baptist church for the past three nights, culminating in a sale of the offerings and decorations last evening. The officers and soldiers had decorated the church in a most artistic manner, and there was a highly creditable display of the fruits of the earth”.

The resumption of Baptist services in January 1897 put pressure on the Salvation Army to build permanent barracks. In October 1899 The North Western Advocate and the Emu Bay Times reported:

“It has been definitely decided to erect Salvation Army Barracks at Devonport with capacity for seating 250 people, at a cost of £500. A sum of money towards the construction of the building has been in hand for some considerable time”.

By October 1900 construction of the barracks had begun:

“The new Salvation Army barracks in Steele street near the corner of Rooke street are now in the course of erection. The preliminary work includes the driving of stout piles on which the large hall will stand, as the sloping ground has necessitated levelling with earthworks, and strong support on the boundary of Rooke street. The hall when completed will be very centrally situated and a valuable addition to the army’s numerous properties in the colonies”.

The construction of the barracks was completed within 7 weeks and the building was officially opened on Tuesday 4 December 1900:

“Yesterday afternoon the opening ceremony in connection with the new Salvation Army Barracks was performed by Brigadier Unsworth, …The building is situated on rising ground in Steel[e] street, and was built from plans supplied by the Property Department, and its erection supervised by one of its officers. Among those present were Major Edwards, the colony's commander, and numerous field officers and soldiers with a good proportion of ladies”.

Proceedings opened with a hymn, after which the Rev J. L. Cope (Wesleyan) offered prayer.': Captain Wells sang a solo, and then Brigadier Unsworth explained that Commandant Booth would have liked to be present, but his health would not permit. ….He called upon Mr A . J. Stokes, chairman of the Town Board, who said he was glad to lend his influence and support to the Army, ….The memorial tablets on the front of the building were then affixed by Mrs W. Aikenhead and Mrs H. Wood, the latter acting as proxy for her father, Captain Holyman, who was absent in Launceston. The brigadier opened the door, and in the name of the Triune God and on behalf of the Salvation Army, declared the barracks open. The flag was run up on the flag staff, and the company were invited to enter and inspect the building”.

“It is indeed a well equipped and compact edifice, with inside porch, and doors opening to two aisles to the platform, which is raised over 3ft and further rises to the back of the building, the elevation thus giving the soldiers a good view of the interior; the seats are substantial but plain, and there is accommodation for 230 people, whilst the ventilation is perfect. All present then returned to the outside of the building, where a photographic view was taken by Mr A. W.Marshall.  At 6 p.m. a good company sat down to tea in the old barracks, which was nicely decorated with ferns and flowers, and where a plentiful supply of eatables was provided and partaken of.”

"At 8 p.m. a lecture was given in the new building, which was well attended, when Brigadier Unsworth, who has spent some years in South Africa, afforded some interesting information concerning life among the Boers; he also sang solos in the Basuto and Dutch languages. The meetings were all very enthusiastic, and the new barracks can be said to have been opened under the happiest auspices”.
The Steele Street Barracks was occupied by the Salvation Army until new premises were built on William Street in the 1970s.  The photograph of the Steele Street Barracks or Hall, was taken in 1965 on the occasion of the ‘Army’s’ 75th anniversary at Devonport.  The story of the Salvation Army’s new William Street Hall will be told in a future article in ‘Churches of Tasmania’. 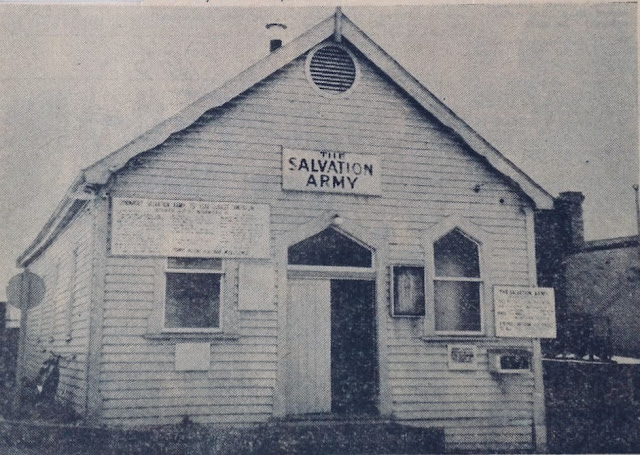 The Salvation Army Hall in Steele Street - The Advocate 1965 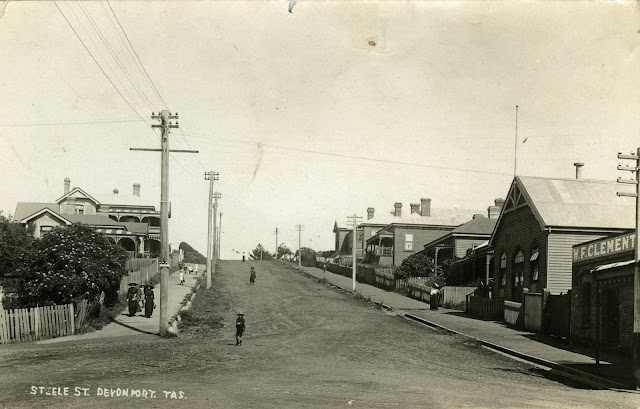 A view looking up Steele Street to the West. The Salvation Army Hall can be seen on the right.
Photo: Libraries Tasmania 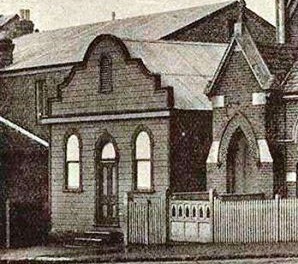 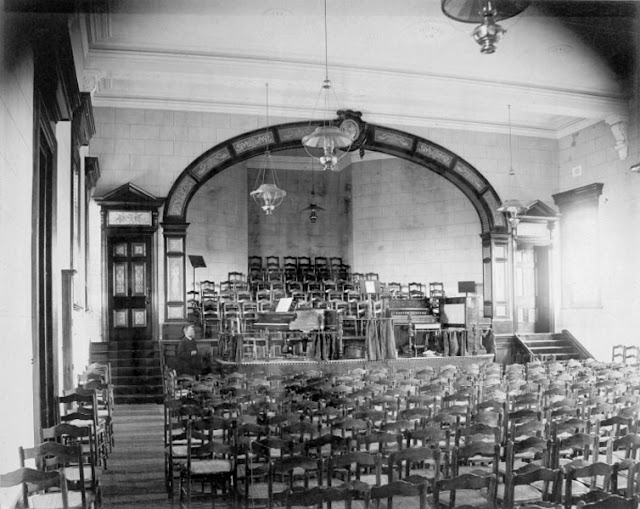 The Giblin Memorial Hall - used by the Salvation Army in 1891 - photo: Libraries Tasmania 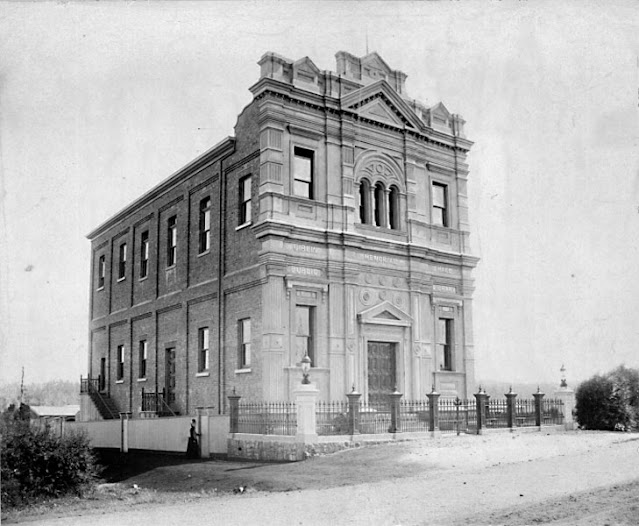 The Giblin Memorial Hall (burnt down in 1895) Photograph:  Libraries Tasmania 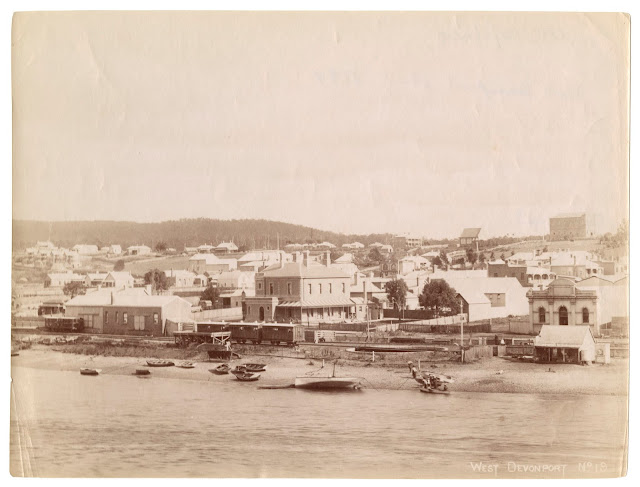