Redpa is a small settlement in the far northwest approximately 40 kilometres west of Smithton. It was originally named Marrawah East before it was changed to Redpa in 1926. The residents asked that it be renamed Braddon but “the authorities decided otherwise”. Redpa is an aboriginal word for "mosquito".

St John’s Mission Hall opened on Sunday 9 March 1925. The building had a dual purpose as a church and community hall. Folding doors closed to hide the altar after a church service so that the hall could be used for social events.

A short article published in the Circular Head Chronicle describes the official opening of the hall:

“The St. John’s Church Hall was opened by the Ven. Archdeacon Atkinson, B.A. last Sunday afternoon in the presence of a large congregation. . The Archdeacon dedicated the altar and sanctuary and expressed his pleasure at the excellent work done by the contractor, Mr. Walter Jones, of Smithton. After the service a meeting was held at which the Rector welcomed the Archdeacon and expressed his thanks to all the workers for their hearty co-operation in the erection of the Hall. Mr. Wells, on behalf of the Marrawah church people also congratulated the Hall committee on their fine building and expressed his good wishes”.

“The Hall is 50ft. x 24ft. with supper room, vestry and sanctuary. The altar is made from figured blackwood with hardwood panels, and was built by Mr. Walter Jones as a thanks offering to God. It is a very beautiful one. Mr. Smith donated the site for the Hall, Mrs. McKinlay the sanctuary-carpet, the Rector the Bible, Mr. Walter Jones the altar cross, Mrs. Moore the sanctuary chair, etc., and Messrs. G. Acheson and D. Mortyn blackwood timber for pulpit. The church now needs a set of Holy Communion vessels, prayer desk, lectern font, and organ, and the Rector will be glad to know of anyone who will kindly donate any of them”.

The hall was extended in the 1950s before a new church was built in 1958. The building was then sold to the community for use as a local hall. It was demolished in 1986 due to lack of use. 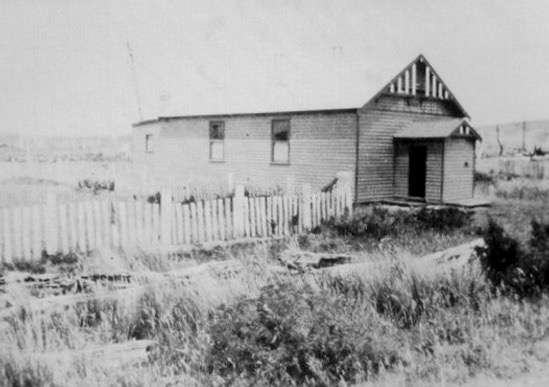 An undated photograph of the St John's Hall at Redpa