- January 23, 2021
Collinsvale is a rural settlement approximately 12 kilometres west of Glenorchy. It is named after Colonel David Collins, first Lieutenant Governor of Van Diemen’s Land. The area was originally known as Sorell Creek but this was changed to Bismarck in 1881. Following the outbreak of the Great War, the name Collinsvale was adopted given strong anti-German sentiment in Tasmania.

Collinsvale had two churches, a Seventh Day Adventist church (1888), which is still in use, and a Wesleyan Methodist church. Little is known about the early years of the church. It opened on Sunday 14 August 1881 and services were held until 1973. The only substantial reference to the church’s establishment is found in an article published in the Launceston Examiner by the newspaper’s Hobart reporter, who visited Bismarck in August 1881. While the reference to the church is slight, I have used most of the article as it provides interesting information and insights about the the early settlement:

"The last Government Gazette contained a notification defining the boundaries of a new township at the head of Sorell Creek, in the Glenorchy district, to be called Bismarck out of compliment to the German settlers there, who regard the great Prussian statesman-the destroyer of one Empire and the builder of another-as the possessor of all that is heroic and patriotic in these latter ages. ….I was told that this new settlement was worth a visit, and I must confess that I was by no means misled or disappointed at a visit that I paid to it yesterday”.

“The settlement is situated about fourteen miles from town, the first part of the journey being over the main road from Hobart to a place called Berriedale, ….Leaving the Berriedale Inn I proceeded along a branch road or track which took me to my destination….The road, if such it may be called, upon which the farmers have had to cart their goods to market….The land about the settlement is exceedingly rich, but it is very heavily timbered, and consequently a great deal of dead work has to be done before the owner can expect to receive any return for it”.

“Upon reaching the nearest part of the settlement, the first object that attracted my attention was the Public School, under the Board of Education, which is conducted by Mr. Villey, and has, I am told, an average attendance of about forty children; English, Germans, Danes and Swedes - the Germans preponderating. The school-house is also used once a month for the purpose of public worship, when the Rev. T. M’Dowall, the Anglican clergyman at Glenorchy, officiates”.

“Not far from the school-house there stands a little Wesleyan chapel, which has only just been completed, and was to be formally opened to-day by the Rev. H. Moore. It is a very neat structure, capable of seating about 150 persons; its cost has been about £75, exclusive of labour; and it is surrounded by the God’s acre of the little settlement”.

“There are one or two farm houses in the vicinity, notably those of the Darcoo family, but it is farther on on the other side of the creek that the most of the inhabitants have settled and where the best land is to be found. It is interesting to notice how persistently these pilgrims from Rhineland have laboured to found their simple happy homes at the antipodes. Heavy timber has been cleared and sawn, little cottages erected, orchards (some of them four and five acres in extent) planted, and general cultivation carried on”.

“The houses that I visited were neat and cleanly, and the wife appeared busy at her household duties, as the father told me the history of German Town, whilst his children prattled the language of Fatherland at his knee. From what I could learn it appears that settlement has been gradual, the great object of the pioneers having been to save sufficient money to bring some of those who were dear to them out to join them. The new comers would take up land, but would work for their neighbours until they found themselves in a position to make a start for themselves, and so things went on until there are nearly twenty German families residing in the vicinity, who are still hoping that more of their country-people will join them and are anxiously waiting for a road, which,…”will open up valuable agricultural land for settlement," and will enable them to take their produce to the city. I must not forget to mention the peculiar ovens which are attached to all these German farm houses, and which are mostly built quite close to the main building itself. Their style of architecture is unique, for they consist of a large irregular shaped mould of earth and stones with a door at one side. Exactly how they are worked is a problem that I was not able to solve, though I had elaborate descriptions given to me, but I am able to say that they bake very excellent bread”.

“Farming is not the only industry which is pursued at Bismarck, for there are charcoal burners and sawyers-some of the latter telling me that they had plenty to do, but could conduct their operations upon a larger scale if they could manage to send the result of their labours away at anything like a reasonable price for carriage.…”.

“The schoolmaster, I understand, is willing to undertake the duties of post master for a moderate remuneration, and the cost of conveyance of a bi-weekly mail to Berriedale would be very trifling…..The population there now consists of nearly two hundred persons, of whom the Germans form the greater part. They have brought with them to Tasmania their simple frugal habits, that love of order and plodding perseverance which are the leading characteristics of their race; and they are now labouring on steadily to obtain absolute possession of the property…we….may expect at no very distant future to see a large and thriving population settled there, and a town grown into existence which shall not be unworthy of the great name it bears, for Nature has done all in her power for these people, and it is very evident that they are very willing to do all in their power to aid themselves.”

The subsequent history of the church is fairly unremarkable beyond the usual harvest festivals, Sunday school anniversaries, fairs, weddings and funerals. The church was fairly active for most of its history. In 1939 the Mercury reported that the trustees of the church had:

“….Purchased a block of land in a central position on which it is hoped to build a new church shortly.”

From time to time the church was used by other denominations including the “Latter Day Saints” and the Salvation Army. Support for the church declined in the 1960s and services ceased in 1973. However, the building was maintained by the Uniting Church until it was sold in 2014. The building was again sold in 2016 and it now appears that it is in the process of restoration.
*Unless stated otherwise, all photographs appearing in this article are my own. 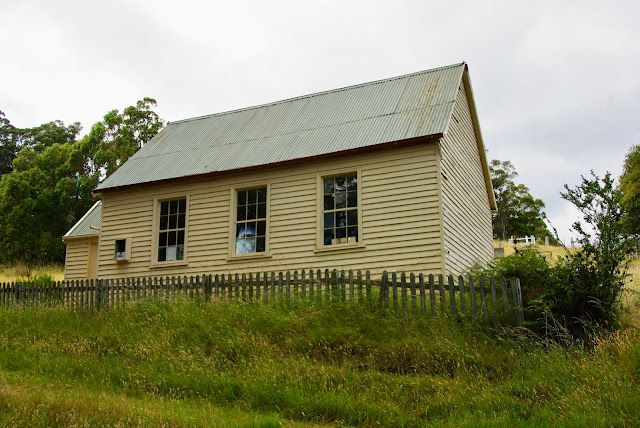 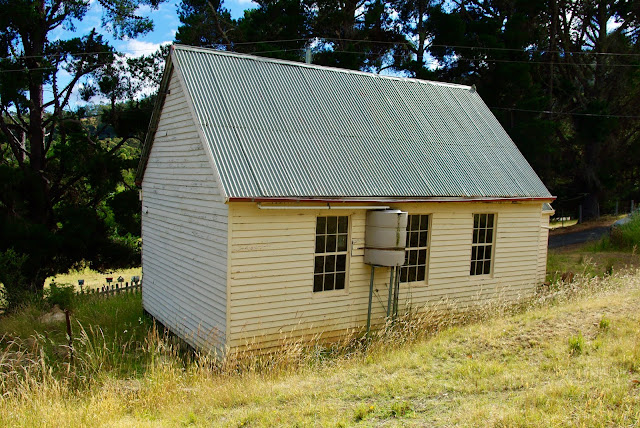 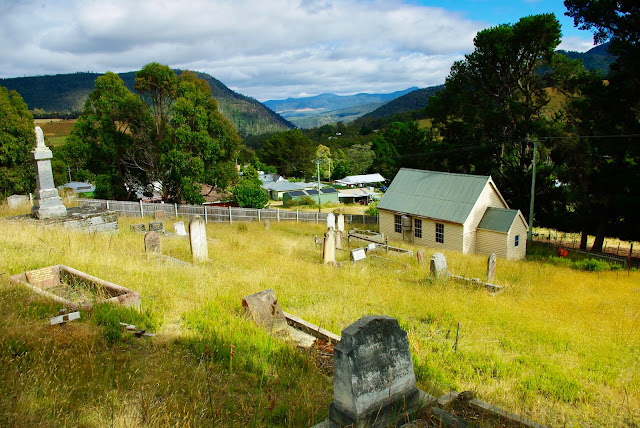 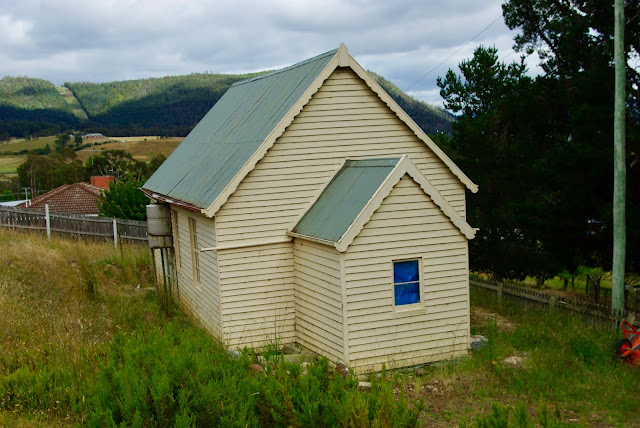 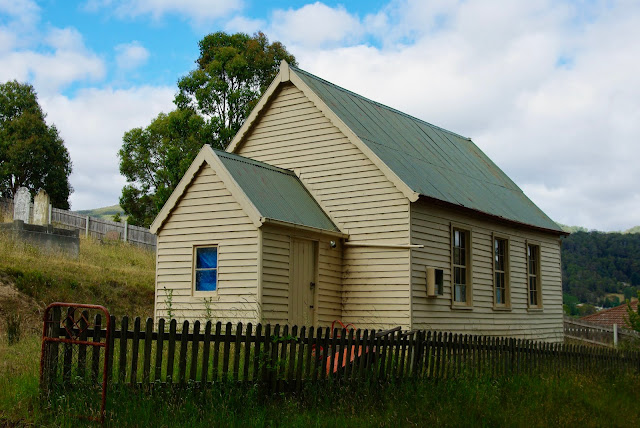 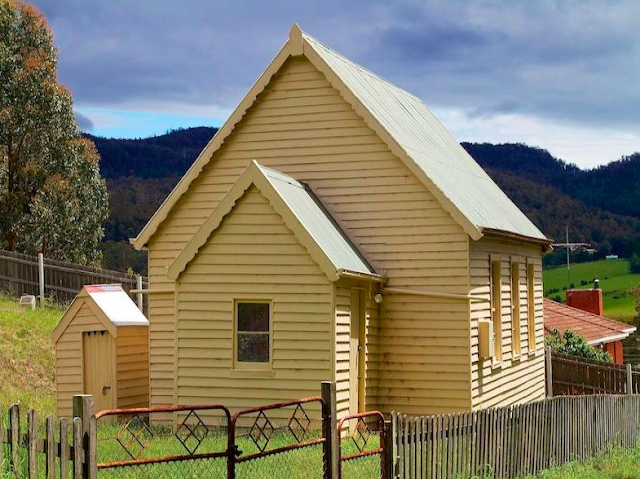 The church in 2014. The outhouse has since been removed. Image credit: Fall Real Estate 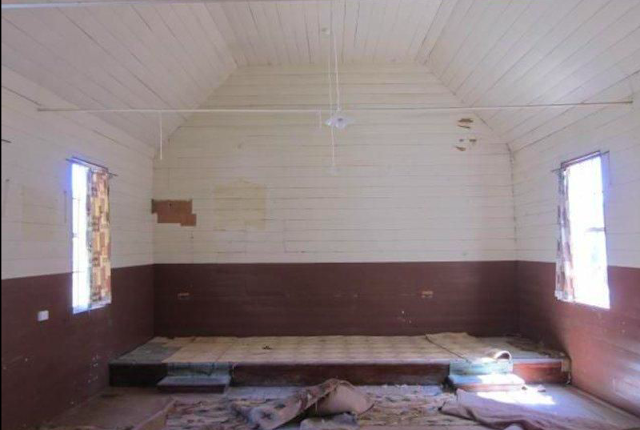 The interior of the church in 2016. The building is now in the process of restoration.
Image source: 4ONE4 Property Company.
Photographs of a selection of the older headstones in the cemetery: 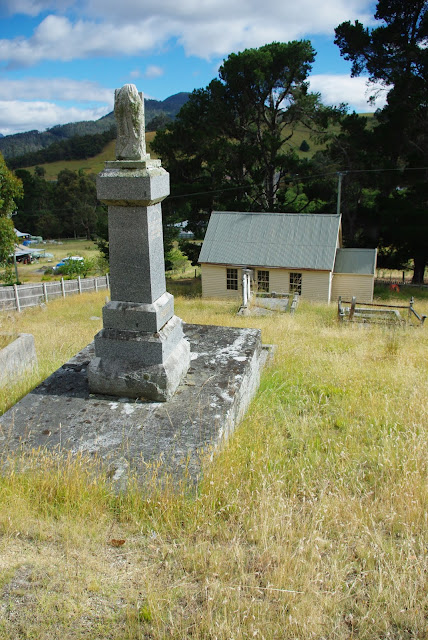 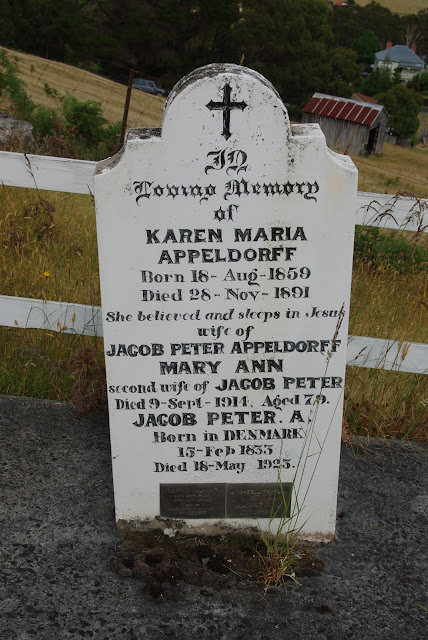 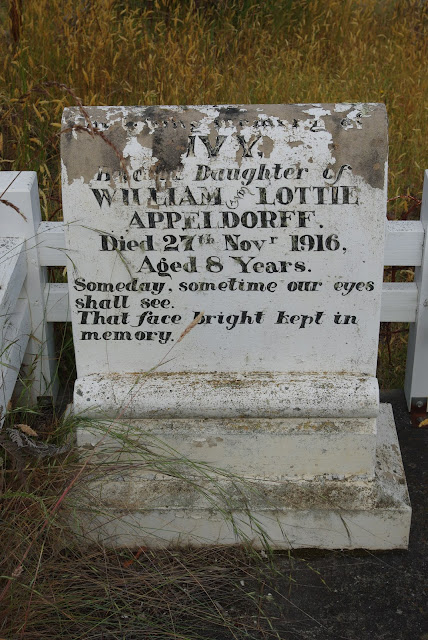 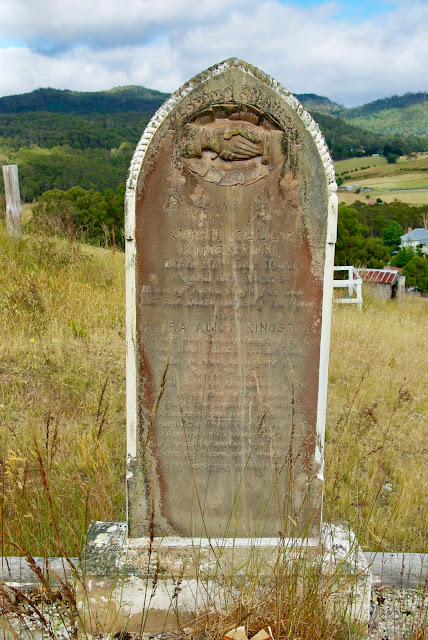 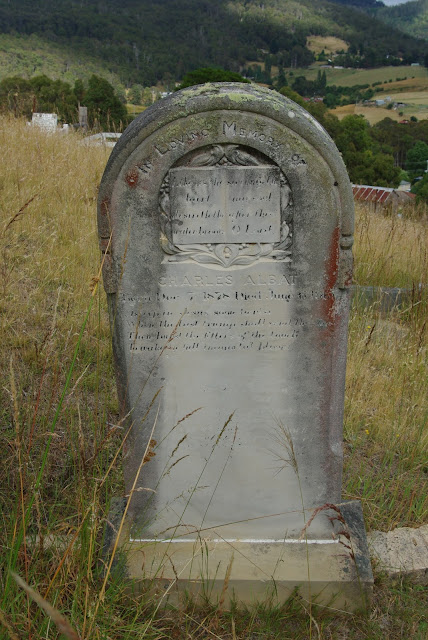 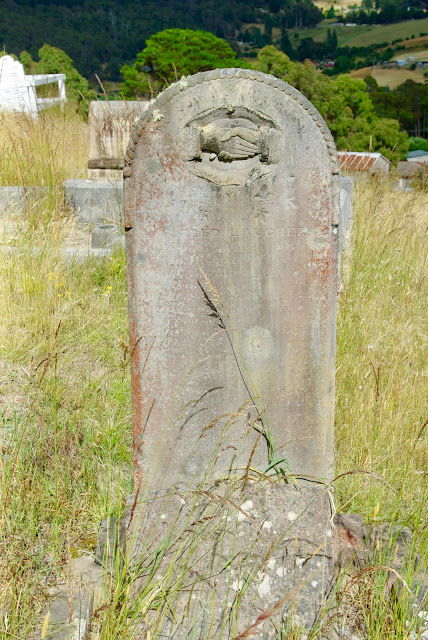 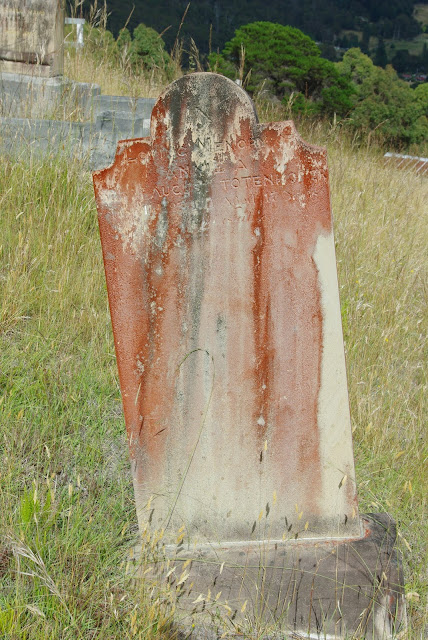 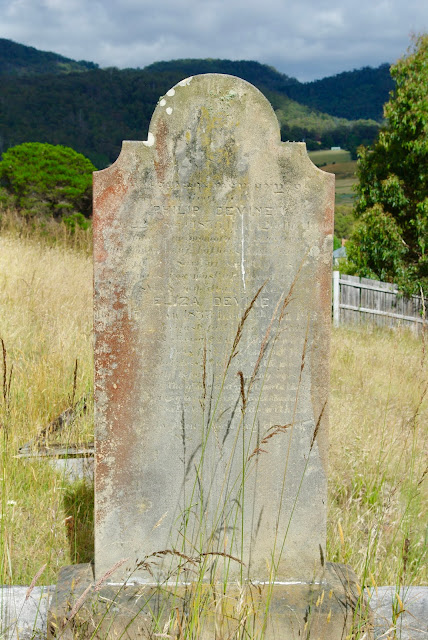 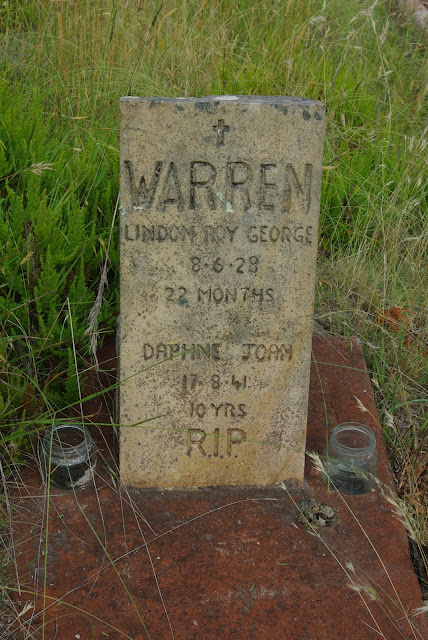