- January 29, 2021
Gladstone is a small and remote settlement situated on the banks of the Ringarooma River in north east Tasmania. It was first settled in 1870 by tin miners; a large number of whom were Chinese. In 1880 the discovery of gold in the area boosted the town’s population but once this was exhausted tin mining became the mainstay of the local economy. Gladstone is named after British Prime Minister, William Ewart Gladstone, who had also served as Colonial Secretary.

At its peak three religious denominations were represented in the town with Catholic, Anglican and Presbyterian churches established. Gladstone’s churches have closed but two of the buildings have survived and have been converted into houses.

In the early 1890s religious services took place in Gladstone’s Town Hall. Efforts were made to establish a Protestant non-denominational ‘Union Church’. In 1892 the Launceston Examiner’s local correspondent reported:

“A successful social took place recently in the Town Hall in aid of a proposed church for this township. For various reasons a large majority of the inhabitants are in favour of a Union Church….”.

However, the movement to build a ‘Union Church’ faded and all denominations struggled to attracted ministers to the town. At the turn of the century Gladstone’s religious life was still in the doldrums while the township itself was hardly thriving. In 1904 a visiting correspondent for Launceston’s Daily Telegraph described the facilities in the town:

“The town hall is a wooden building, neat but not gaudy. Apparently some doubts existed as to its stability and resisting powers against the high winds that at times prevail at Gladstone, and not trusting entirely to Providence, the walls outside have been stayed up with strong wire ropes. The hall is used for church services, meetings, and entertainments. The letting and care of the hall is under the control of trustees. There is a Roman Catholic church, but services are seldom held there, the members of the church being hardly sufficient to induce a clergyman to travel so long a distance. The State school is a wooden structure that not long ago had a much needed renovation. There are 36 children’s names on the roll. A number of these children are of Chinese extraction, and these the schoolmaster, Mr G. A. Green, finds bright and intelligent. Mrs Green also assists in the school work. The Police Department. — Trooper John Lonergan has charge of… There is a courthouse, watchhouse, and residence….Mr Galloway is the only storekeeper at Gladstone; he also keeps the hotel there, where comfortable quarters are available for visitors”.

While the Anglicans and Presbyterians succeeded in opening churches in 1909 and 1919 respectively, the Catholics appeared to have acquired a church by the early 1890s. The Catholic community was established by 1883 with Father Martial Mary and Father James Murphy holding regular Mass in the public hall. By 1895 it is certain that the Catholics had acquired a permanent place to worship. Following a severe storm which struct the township in September 1895, a report in Launceston’s Daily Telegraph reveals the existence of a Catholic church of sorts:

“A great number of trees and branches have been blown down in the bush, and on the township a chimney at our local post office, and one at the building used for the Roman Catholic church, have shared the same fate…”.

The precise date that this church was built and dedicated is not known. According to Margaret Fairburn, in “The flickering flame: Catholicism in north-east Tasmania, 1877-2011”, St Michael’s Catholic church was “built of of corrugated iron, with a weatherboard front”. Father Maurice Walsh noted that:

“According to local legend, this church was originally a store. It had been renovated to make a church and had served the small community well for a number of years”.

“The flickering flame” records a further description of the building by a parishioner. It was:

“A rather small building which had two rows of four stools on either side of the aisle. There was a blue curtain behind the altar and people went behind the curtain to go to Confession….the building had vents in the front and rear walls through which birds would get into the church…”.

The building described may indeed be the same as the one mentioned in the Daily Telegraph following the storm of 1895.

With the decline of mining activity by the mid-20th century Gladstone’s population declined and the churches closed. While the Anglican and Presbyterian churches were sold and converted into houses, St Michael’s fell into disrepair and was condemned and eventually demolished in 1969. After the building was pulled down the materials were taken to Boobyalla where they were used to construct a shack.

Only one partial photograph of the church exists but I am hopeful that more exist and become available. Additional information about this church is most welcome as all articles are continually updated. I can be contacted through this page or my Facebook page "Churches of Tasmania" which is linked here: Churches of Tasmania. 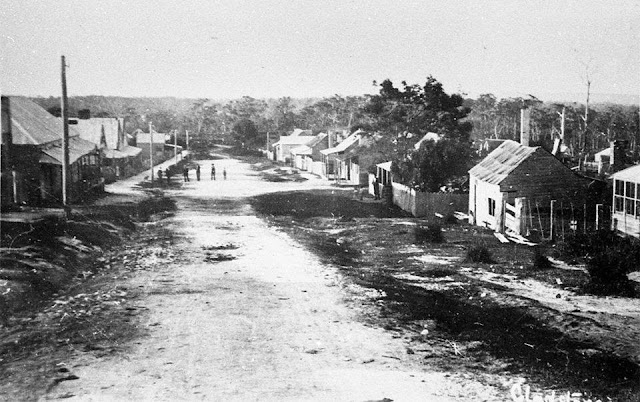