- January 31, 2021
Stanley is a classified historic town on the northwest coast approximately 80 kilometres west of Burnie. The Van Diemen's Land Company once had its headquarters in the area which was originally known as Circular Head. It was later named after Lord Stanley, the Secretary of State for the Colonies, who went on to serve three terms as British Prime Minister.

Stanley’s former Wesleyan Methodist Church is now used as a church hall and it situated alongside St James Presbyterian church on Fletcher Street.

The first Methodist services held at Circular Head were held in 1862 by Reverend Cook. Thereafter Reverend Hayward preached once a quarter. The Wesleyan’s had an arrangement with the Primitive Methodists where the latter would concentrate on the Penguin district while the Wesleyans would serve Circular Head.

In the early years the Methodists used St James Presbyterian church (opened 1855) until they built their own church in 1873. A site was purchased next to the Presbyterian church and a small weatherboard chapel was officially opened on Sunday 12 October 1873. The occasion was recorded by the Launceston Examiner and the Cornwall Chronicle. The Examiner’s correspond reported:

“The new Wesleyan Chapel at Stanley was opened for public worship by the Rev. O. A. Ogilvie, the minister belonging to that body stationed in this district. The building is a very neat edifice 35ft. x 20ft. capable of containing some 150 persons, and is pleasantly situated between St. Paul's Church, and the Presbyterian Chapel. The inside is floored and lined to the ceiling with clear pine, with Gothic windows, and it has a very neat porch. The whole church is seated with blackwood, with back rails, and it has an exceedingly handsome panelled pulpit, having steps and aide railings of the same material, which give it a very pretty appearance. The roof, is supported with three columns for strength, but at present it is open, not ceiled. On account of the distance from the other parts of the circuit on the North-West Coast, and the very bad roads at this, time of the year, it was impossible to secure any other minister to assist Mr Ogilvie in the opening services; therefore the whole devolved on him, both morning and evening. The rev. gentleman preached most impressively and fittingly for the occasion. In the evening the chapel was crowded. At the close of each service a collection was made in aid of the building fund. On the coming Tuesday, the 14th instant, a tea meeting is to he held, at four o'clock, the amount collected, as well, to go towards the building fund…..”.

Further to the Examiner's report, the Cornwall Chronicle recorded that the land and building costs amounted to £200.

It is somewhat surprising to learn that having built a chapel, the Wesleyan’s had difficulty in regularly supplying a minister, a problem which was shared by Stanley’s Presbyterians. In 1886 the local correspondent for the Daily Telegraph reported:

“In religious matters we are somewhat peculiarly situated, having a resident minister (Anglican), without a church to preach in, and two churches (Presbyterian and Wesleyan) without a resident minister. For the last few Sundays, a Presbyterian minister, the Rev. Mr Blue, has been conducting services with much acceptance to large congregations in the Presbyterian Church. An effort is being made to retain this gentleman in the district, and it is likely to succeed. The Rev. Mr Jones (Wesleyan), from Mount Bischoff, preached here last Sunday evening to a very good congregation. His residence is so far away, and the travelling so expensive, that he cannot manage to be here oftener than once a quarter. More than 12 months have elapsed, occasionally between the visits of Wesleyan ministers, the work falling to a layman, which is not at all satisfactory. The district is large enough to employ two resident clergymen, and leave them no idle time either. And the people are quite able to support two ministers, if they are willing, and I would not dare to say they are not”.
Two years earlier a correspondent for the Tasmanian had complained:
“There are four church buildings, Church of England, Roman Catholic, Presbyterian, and Wesleyan Methodist, but neither of the latter two have a minister….It is a great pity; that the Wesleyans should hope against hope by trying to bolster up a dying cause; why not gracefully retire? I attended the service twice, and found a few giddy young boys and girls, with an adult or two. The conduct of the former class was not what I expected to see in a place of worship. Far better, for all to unite, under the Church of England clergyman; than to be thus divided and dwindle away…”.
The situation seems to have changed little by the 1890s. By the time of the Methodist Union at the turn of the century, the Wesleyan’s reached an agreement with the Presbyterians in which the the Methodists would concentrate on the growing settlement at Smithton and would therefore leave Stanley.
Thus around the turn of the century the old Wesleyan chapel was vacated and was acquired by the Presbyterians for use as church hall. The church and hall are still in use and have also become popular wedding venues in scenic Stanley. 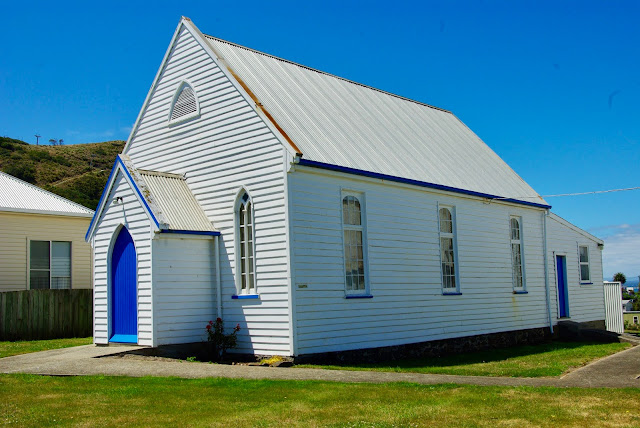 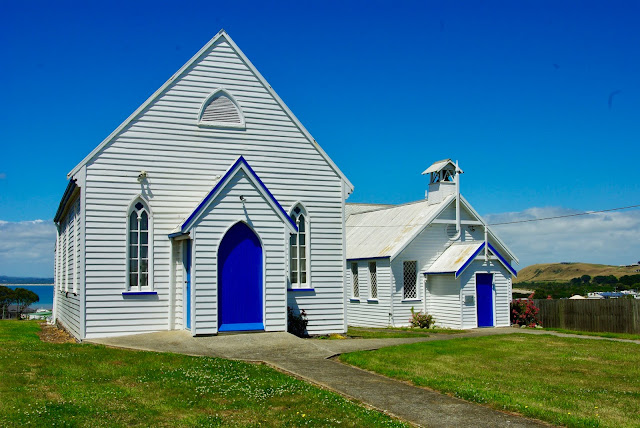 The former Wesleyan chapel alongside St James' Presbyterian church on the right. (my photograph)