- March 10, 2021
New Town is a northern suburb of Hobart. It is also one of Hobart’s oldest suburbs and consequently the area contains many historic churches. New Town became a municipality in 1907 but was absorbed into Greater Hobart in the 1920s when its municipal status was relinquished.

The parish's first priest, the Very Reverend Archpriest Theodore Borishkevich, served from 1949 until his death in 1972.

A curious feature of the church is a headstone placed near the entrance of the building. It is in memory of Gregory Belawin, Assistant Paymaster of the Russian Imperial Corvette, Boyarin, who died in May 1870.

In 1870 the Boyarin visited at Hobart while on a voyage around the world. During the stay the crew were welcomed and entertained by the citizens of Hobart. Towards the end of the visit the ships purser became ill and was hospitalised. He subsequently died and was buried at St David’s cemetery. The Tasmanian Times provides considerable detail about this unfortunate event:

“A seaman belonging to the Boyarin named Gregorio Belawine, holding the rank of Paymaster's Assistant expired at the General Hospital about two o’clock on the afternoon of the 6th inst. The poor fellow was admitted to the Institution on the 25th May last on a certificate signed by Dr Wendt of the Boyarin, suffering from pulmonary consumption; on admission he was placed under the treatment of Dr Smart; notwithstanding all the efforts made by Dr Smart to restore health the patient gradually sank and his life terminated in the Hospital at the hour above named. He was thirty years of age, and on board ship was generally respected for his quiet demeanour and precise attention to his duties".

"At night the body of the Russian sailor was removed to the dead-house, and the usual ceremonies of the Greek Church—to which persuasion he belonged—were observed, the offices of the dead in the Russian language being read over his remains by two of his comrades. A number of the seamen and Captain Serckoff and nearly all the officers were on shore on the morning of the 8th instant, and attended the funeral of the Assistant Paymaster of the Boyarin, Gregorio Belawine. The body was in the deadhouse of the Hospital, the coffin was tastefully ornamented, and at the head was inscribed in Russian characters the name, age, and rank of the deceased".

"After the burial service of the Greek Church had been pronounced in an impressive manner by Lieutenant and Paymaster Birileff, several of the sailors singing the responses, the coffin was borne by Captain Serckoff and his officers to the hearse, which was in attendance at the rear of the building, and placed inside. A firing party of thirty seamen under the command of Lieutenant Loman, Count Nyrod, and Sub-Lieutenant Mochulsky was drawn up in the immediate vicinity of the hearse and presented arms, afterwards falling in at the rear of the procession. The procession then, preceded by the Revs Bromby, Green, and Hayward, and a band of seamen singers, who chanted prayers all the way, and composed of the hearse, followed by Captain Serckoff and his officers, and by the firing party, moved onwards in the direction of St David's Church, where the English burial service was pronounced by the Rev Mr Cox. The other three clergymen accompanied the Cortege to St David's Burying Ground, where they read the remainder of the service at the grave. As the body was consigned to its last resting place the firing party discharged three volleys. The band of the Hobart Town Volunteer Artillery met the funeral procession at the gate of the Hospital and marched with them to the grave, playing the Dead March in Saul on the way. A great concourse of people witnessed the ceremony. On each occasion when the coffin was taken out of the hearse— at the Church and at the Cemetery — the officers conveyed it, the firing party presenting arms. On the conclusion of the ceremony,the band of the Volunteer Artillery paid a visit to the Boyarin, and were hospitably entertained there by the officers. Captain Serckoff, being desirous to acknowledge the services of the Anglican Clergy in their ministrations at the funeral of the Russian seaman interred with the rites and ceremonies of the Church of England, and having ascertained that no pecuniary fee would be charged or accepted in connection with the burial or the grave, asked permission to offer a subscription, as from himself and his officers, towards the building fund of the new cathedral of St David, and a donation of £10 was accordingly made, which, while it satisfied the grateful courtesy of the Russian Officers, could not fail to be acceptable and gratifying to the clergy and laity of the Anglican communion. The officers subsequently caused a neat headstone to be placed over the grave of the assistant paymaster Gregorio Belawine who died here a few days ago. ….The 9th instant being the last day on which the Russian war-ship was open to visitors, a number of citizens availed themselves of the opportunity of inspecting the Boyarin, and were received with the courtesy which characterised the officers during their sojourn in these waters….”. 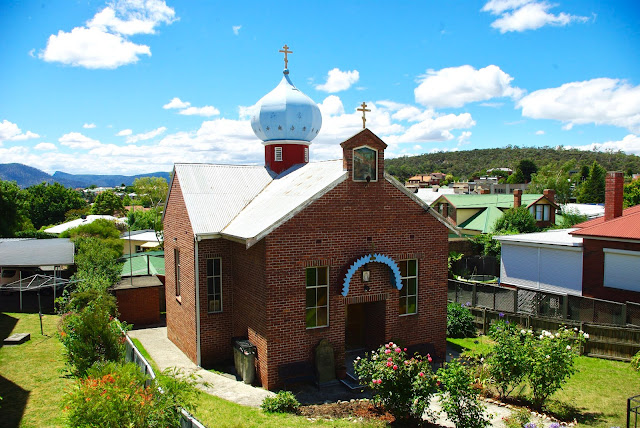 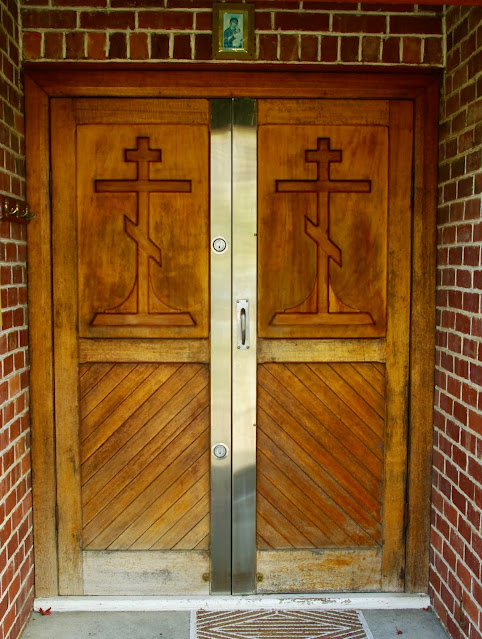 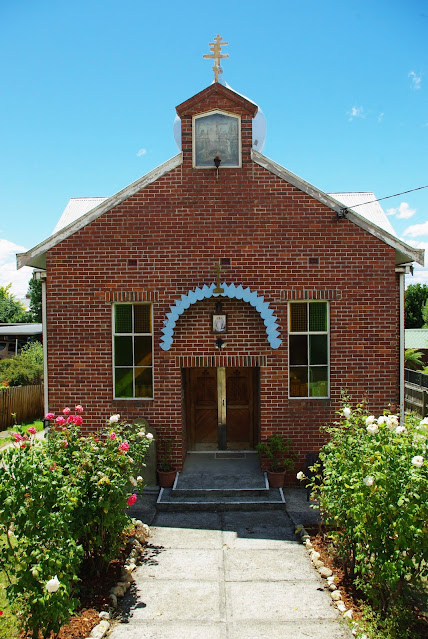 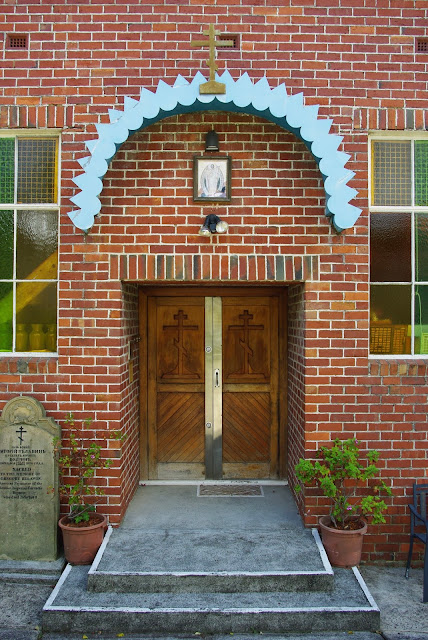 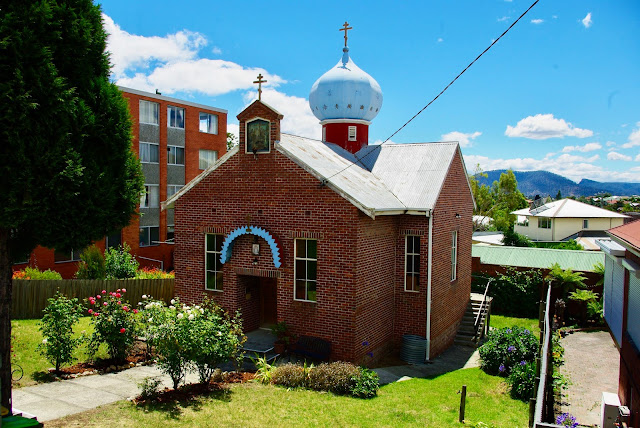 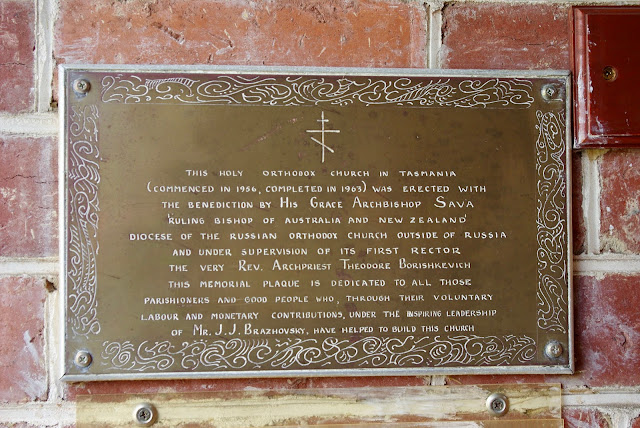 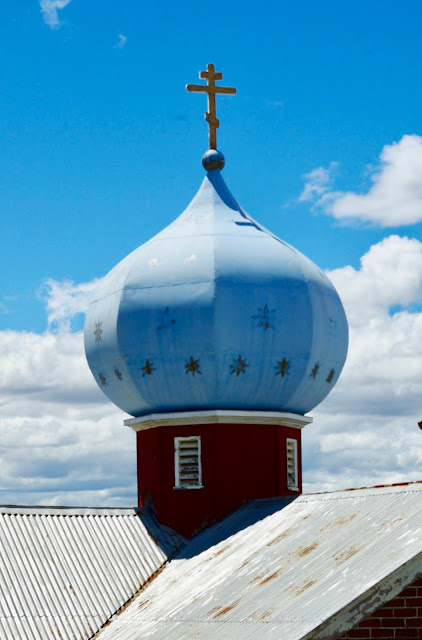 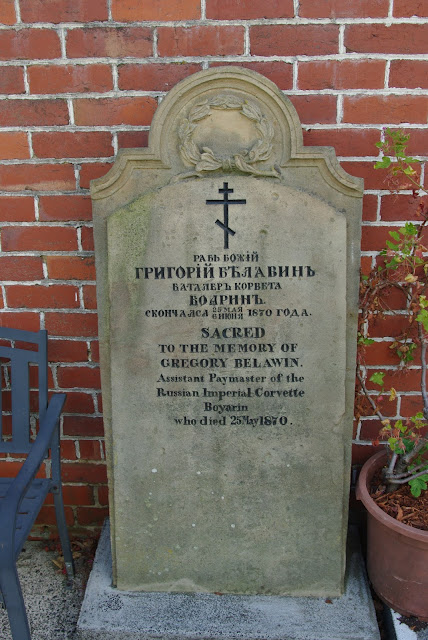 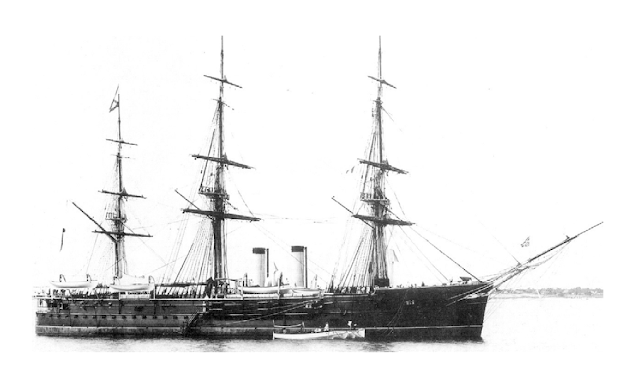