- April 07, 2021
Smithton is the commercial and industrial centre of the Circular Head district in the far northwest of the island. The early settlement was known as Duck River but this was changed to Smithton in 1895. Smithton is named after an Irishman, Peter Smith, who had been a constable, and later the licensee of ‘The Plough Inn,’ at Stanley. Smith moved to Duck River after buying some 500 acres of land from the Poke and Ollington families. Smith’s successful enterprises enabled his return to Ireland.

The first Catholic churches in the Smithton district were built at Irishtown (1903) and Montagu (1910). A Catholic church at Smithton was not built until 1934 and until this time worship took place at various locations including the State school and Malley’s Hall.

A site for a church on Emmett Street had been purchased by Father T.J. O’Donnell in 1910. O’Donnell was a legendary church builder and during his time at Circular Head (1909-18) he oversaw the construction of new churches at Forest, Wynyard and Montagu. O’Donnell’s departure in 1918 no doubt had an impact on the development of a church at Smithton and when Archbishop Hayden visited the district in early 1933 he expressed his surprise that a substantial county town did not possess a Catholic church. Hayden’s comments gave renewed impetus to the cause and a building committee was formed under the leadership of Mr Phil Bugg and fundraising was resumed. Initially a timber church was proposed however parishioners preferred a brick building thus a design by Launceston architects H.S. East and Roy Smith was abandoned.

The foundations for a brick church were laid in May 1934 and the building, constructed by Mr. Jones of Wynyard, was completed by September and officially opened in October. The official opening of the church was announced in the Circular Head Chronicle:

“For many years the Catholic people….have been without a place of worship, and now their dreams and wishes have been realised, and a fine substantial brick building has been erected. Its presence gives pleasure not merely to the Catholic people of Smithton, but to all and sundry, for besides fulfilling its purpose as a place of worship, it is a beautiful addition to the town itself. It has been called after St. Attracta, the patron saint of the diocese of Achonry, which is Father Cullen's native place. His Grace Archbishop Hayden, will bless and open the church on Sunday, 21st October….As the church is not expected to hold all the people who will be there, a platform will be erected outside, from which speeches will be given by the Archbishop and others…”.

The building described in a further report in the Circular Head Chronicle:

“The new church has a substantial outside appearance and inside is, comfortable. The furnishings are complete but for the altar, which is to be installed shortly. The lighting is good. There are three globe electric lights for night services, and the sunlight will be diffused through top window sashes of the palest blue and bottom sashes of a pale brown. Stained glass windows, add to the attractiveness of the frontage….There is seating accommodation for 100 persons”.

At the time of the church’s opening plans were being considered to establish a Catholic school at Smithton. This was realised in 1951 when the Order of the Sisters of St Joseph opened St Attracta’s Covent School with an enrolment of 99 students. The school was opened by Archbishop Tweedy on 24 June 1951.

The convent school closed in 1978 and was replaced by St Peter Chanel school which opened at a new site on Sampson Avenue in 1979 alongside St Peter Chanel Catholic Church. Following the relocation of the school and church, St Attracta’s covent and church was sold. The convent buildings are used as a day care centre while the church has been converted into a house. 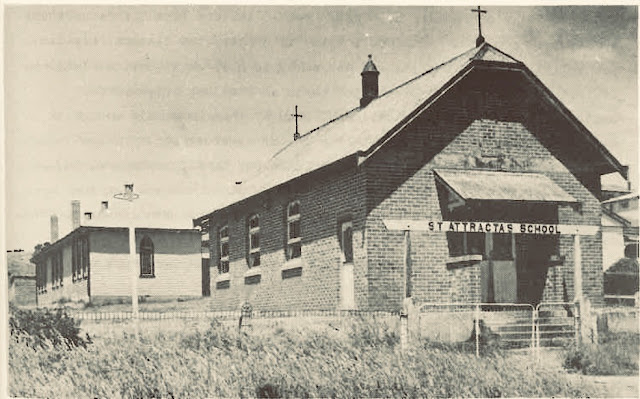 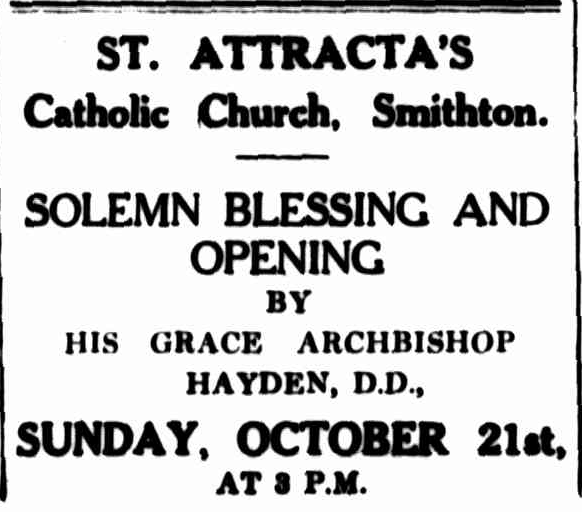 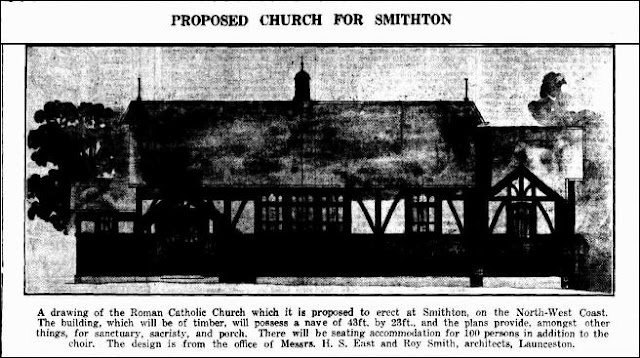 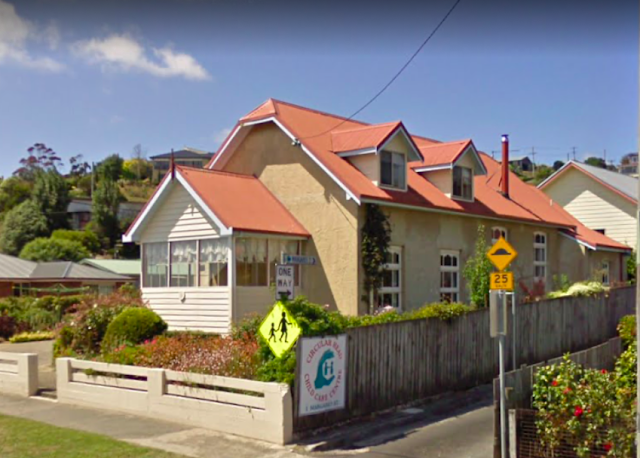 The church has been converted into a house. Image: Google street View (2010)