- April 20, 2021
New Norfolk is a large town on the banks of the Derwent River approximately 40 kilometres west of Hobart. It is a historic town mostly settled by Norfolk Islanders soon after its establishment. When Governor Lachlan Macquarie visited the township he named it Elizabeth Town after his wife. However, it was later decided to adopt the name New Norfolk to acknowledge the new settlers.

In Tasmania there are many examples of plans to build churches which were never realised. However, there are very few examples of a church being built but never used as a place of worship. The story of St Columba’s at New Norfolk is one of these and it needs to be told even though it is a virtual footnote in the rich history of the town’s many churches.

Presbyterian services at New Norfolk date back to the 1870s although these were somewhat intermittent and ceased in 1876. By the mid 20th century progress towards building a Presbyterian church was finally realised. In October 1951 the Launceston Examiner reported on the first service held in 74 years:

“The service yesterday was conducted by the Rev. H. L. Dunn, Hobart, who said the large attendance was very encouraging. Services are to be held fortnightly; in a Musset hut until the proposed new church is completed in about nine months. The church will be at New Norfolk, the housing sub-division of Australian News print Mills Ltd.”.

The Musser hut was erected as temporary accomodation for a Sunday school and as a place of worship until a permanent church could be built. Plans for the construction of a church on Derwent Terrace had in fact started in 1948 when the Presbyterians approached Australian Newsprint Mills for land, which was generously donated by the company. In 1950 the project appears to have had a false start. In September 1950, the Mercury reported:

“A new Presbyterian Church and community centre will be built soon at New Norfolk North. The foundation stone will be laid on Saturday, October 14, by Sir Keith Murdoch. The church will be known as St. Columba’s”.

For reasons not known this ceremony never went ahead. More 18 months was to pass until the foundation stone was ceremonially laid on Saturday 3 May 1952. This time the stone was to be laid the Governor-General, Sir Ronald Cross. The Mercury reported:

“The Governor (Sir Ronald Cross) this afternoon will set the foundation stone of a Presbyterian Church community centre at New Norfolk. The church is being built on a site provided by Australian Newsprint Mills Ltd. in Derwent Terrace on the northern side of the river. It is considered the first project of its kind built since the war, and may form the basis for similar centres in Tasmania. The building is to be a combined church and hall. It will be equipped with reversible seating, with partitions to cover the stage when services are held, and the sanctuary when other functions take place. Part of the floor will be laid out for badminton, and the equipment will include a modern kitchen, and two meeting rooms. Seating capacity will be about 300”.

Amongst the official party was the President of the Legislative Council (Sir Rupert Shoobridge) and the general superintendent of Australian News- print Mills (Mr. L. R. Benjamin). The church was designed by architect Mr A. Lauriston Crisp of Hobart and to be built at a cost of £8000.

Given the degree of support and publicity for the establishment of the church, it is somewhat surprising to learn that the project did not proceed as planned. The reason given for this was that the sale of properties owned by Hobart Scots Church, to fund St Columba’s, had not gone ahead “because of certain unexpected difficulties”. Although considerable progress had been made with construction, the project was abandoned by the Presbyterian board of trustees.

However, all was not lost. In February 1954 the Mercury reported:

“Australian Newsprint Mills Ltd. have bought a partly completed church community building. The managing director of Australian Newsprint Mills Ltd. (Mr. S. L. Kessell) and the Rev. H. L. Dunn, of Scots Church, Hobart, yesterday made a joint statement indicating that the partly completed building in the centre of the newsprint housing area would be taken over and completed by the company. Mr. Kessell said that, in view of the need for a hall for social gatherings in the newsprint housing subdivision, the company directors had agreed to buy the church building…..Mr. Kessell said the company was planning the early completion of the building. …Mr. Dunn said, a start had been made with the church hall building at New Norfolk. It became necessary to suspend operations, and recently an approach was made to the directors of Australian Newsprint Mills Ltd. to purchase the partly-completed structure”.

The “Newsprint Hall” was completed within a matter of months and officially opened on Monday 19 October 1954 with the management of the building handed over to the “employee’s council”.

By the late 1980s the ANM Community Hall fell into disuse and the building was later sold. For a time it was used a country music club but was shut down when the local council refused to issue a public entertainment licence due to complaints from neighbouring properties. The hall was subsequently converted into fitness centre which incorporated a gym and indoor heated salt-water swimming pool. At present the hall is operating as Derwent Valley Indoor Swim Centre. 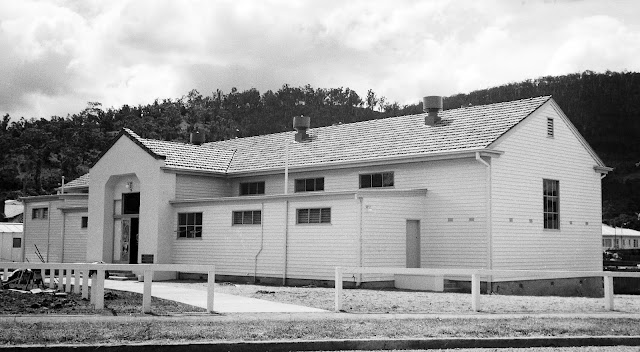 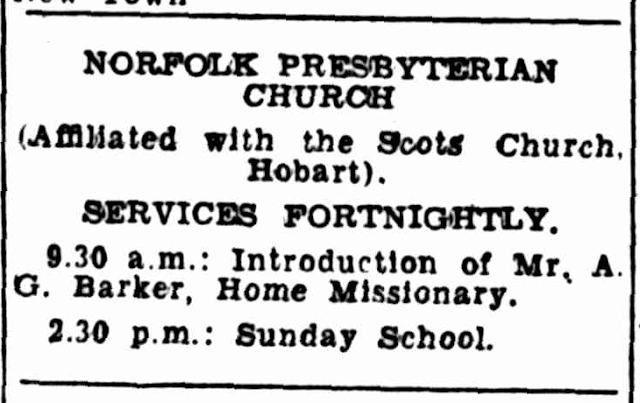 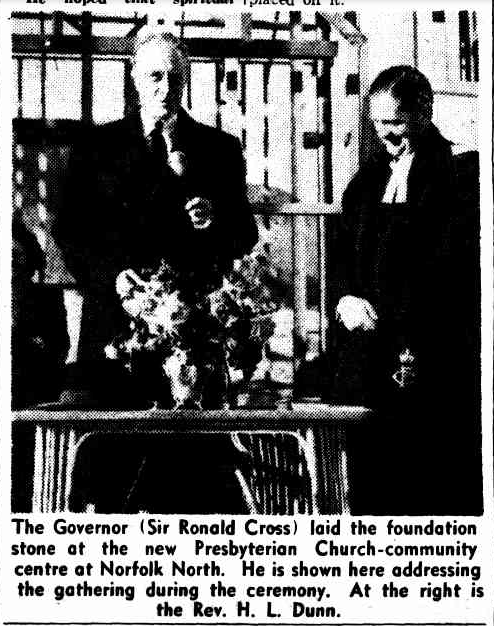 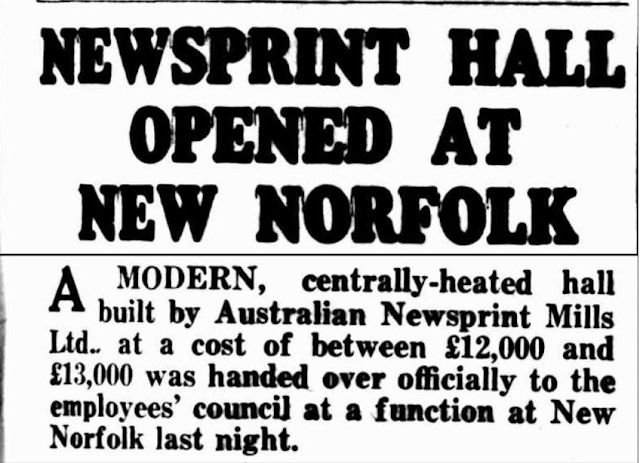 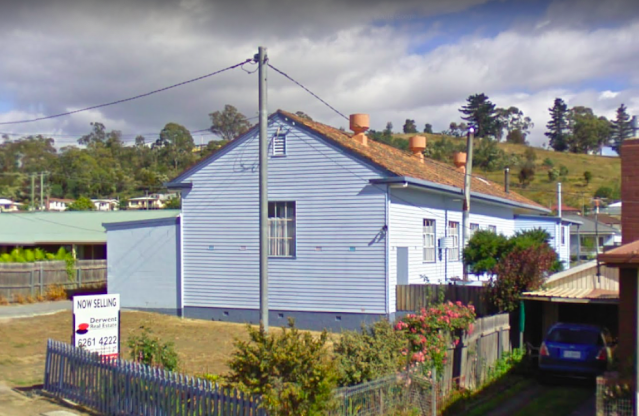 A Google street-view image of the building -  2009 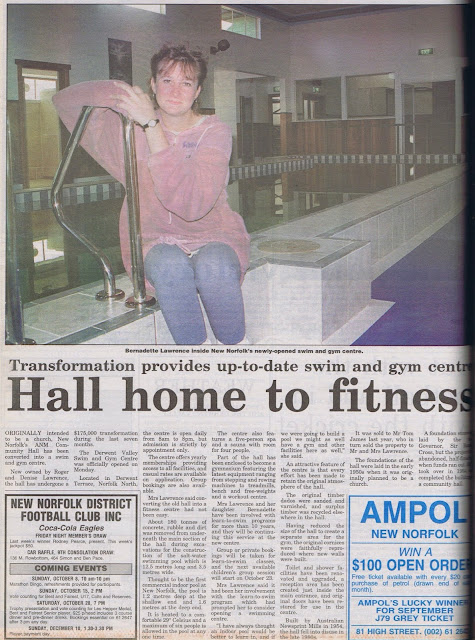