New Town is a northern suburb of Hobart. It is also one of Hobart’s oldest suburbs and consequently the area contains many historic churches. New Town became a municipality in 1907 but was absorbed into Greater Hobart in the 1920s when its municipal status was relinquished.

Sacred Heart Catholic Church is the fourth Catholic church built at Hobart. The church at New Town was established largely as a result of the work of Father P. R. Hennebry, who appears to have had charge of the New Town, Glenorchy, Bellerive, Rokeby, and Kingston congregations from about 1869 until 1888, when the district was served from St. Mary's Cathedral.

Sacred Heart church took nearly four years to complete following the laying of the foundation stone in 1878 on a green-field site purchased for £120. While the church opened in 1880, a further two years were to pass before the sanctuary was completed in 1882.  The construction of the church was covered in great detail by contemporary newspapers. This article will substantially draw on three reports which bring to life New Town’s vibrant Catholic community and provide detailed descriptions of this example of a Henry Hunter designed church:

The Hobart Mercury records the laying of church’s the foundation stone on Sunday 3 February 1878:

“The ceremony of blessing and laying the foundation stone of a church for the Roman Catholic’s of New Town took place yesterday afternoon, in the presence of a large number of spectators. The hon. Attorney-General, member for the district, and a number of visitors from Hobart Town were upon the ground, and the concourse in all numbered about 1,000 people. The weather continuing fine allowed the ceremony to proceed without interruption, and the ground presented a brilliant aspect, with flags flying in various portions of it”.

“The clergy having vested in Mrs. Meredith’s house, a procession started therefrom for the ground about half-past 3 o'clock, in the following order :- Children of the Queen's Asylum, male and female; village children, children of Mary, headed by their banner; members of the Hibernian Society in their regalia; the choir; the clergy, their Lordships the Bishops of Sandhurst (Dr. Crane), and Maitland (Dr. Murray); The Bishop of Hobart Town, vested in cope and mitre, and carrying the pastoral staff, attended by the Rev. M. Beechinor, as chaplain”.

“The procession wound its way to the site of the future church, and halted at the wooden cross, erected on the site of the future altar. Here a circle was formed, and the office commenced by prayers, which were said by the Bishop of Hobart Town, who then sprinkled the whole of the outline of the foundations with Holy Water. …And the Bishop approached the stone, and having sprinkled it with Holy Water, it was lowered to its place. In a cavity beneath it were placed the usual formal documents, copies of the daily papers, coins, etc.".

According to a report published in the Hobart Tribune, relics from Ireland were also placed below the foundation stone: “A small packet of ashes, alleged to have come from the tomb of St Patrick, was also committed to the cavity”.  The unfinished building was opened on Sunday 18 January 1880. The Hobart Mercury:

“Yesterday's ceremony was of a most imposing character, and the large concourse of clergy and people showed what an amount of interest was taken in the event…. Long before the service commenced, the scene outside the church became a busy one. One corner of the piece of elevated ground on which the church is so placed as to be a prominent object in the landscape for miles round was early occupied by carts and more aristocratic vehicles of all descriptions and many varieties, Cooley's busses being amongst the many means employed for the conveyance of city residents to the scene of attraction….”.

“At half-past 10 o'clock a procession consisting of cross bearer and acolytes; members of the Hibernian Society, in regalia, to the number of sixty; Children of Mary, thirty village children; twelve serving boys; the clergy; His Lordship Dr. Murray, Bishop of Maitland New South Wales, vested in cope and mitre, and carrying the pastoral stuff, attended by the Father Beechinor, and accompanied by a small choir, left Meredith's cottage, where the vesting was carried on, and were conducted to the front door of the church by the pastor, Rev. P. R. Hennebry….”.

The article goes on to describe the building in great technical detail, a portion of which follows:

“The new building, though not very large in size is well arranged and well lighted on all sides. The style of architecture is Gothic, late in the early English period. The plan comprises a nave 63ft. by 29ft., capable of accommodating about 300 persons; a chancel,  with an apsidal termination (which is not yet, built), 26ft. by 14ft; and sacristy, I6ft. by 14ft. The building stands due east and west, and has on the north side a porch 11ft. by 10ft. At the north-west angle of the nave an octagonal turret is, carried up for a belfry. At present it is only built high enough to clear the coping on the nave gable, and is there covered over with a temporary roof….. At the west end, are two handsome two-light windows with traceried heads, and a circular window above filled with tracery, the whole being connected by a cusped label mould, running round the window heads across the entire gable. The entrance doorway in porch, is deeply recessed and moulded. The roofs are slated, and are open internally to the ridge, supported on arched principals, springing from moulded corbels built in the wall, The roofs are of Oregon pine throughout. The chancel arch is deeply cut and moulded, and springs from semi-octagonal piers having moulded caps and bases.  The opening is 25ft. by 16 ft. in the clear, and is, for want of funds, temporarily enclosed by a wooden structure which forms a quasi chancel”.

“The church…is built of brown stone from Derwent Park quarry, relieved by Kangaroo Point white stone, ….The contract for erection of the edifice was taken by Mr. P. Cronly, who has faithfully carried out the work, from the design and under the immediate supervision of Mr. Henry Hunter,…”.

“The altar and screen at back of same, together, with other fittings, are those which have been for so many years in use in the Catholic Chapel at the Queen’s Asylum, and which have been generously handed over to Father Henneby by the hon. the Colonial Secretary”.

Sacred Heart was finally completed with the construction of the sanctuary which was consecrated on Sunday 16 January 1882:

“The lately erected sanctuary of the Church of the Sacred Heart, New Town, was, yesterday morning, consecrated and opened for the celebration of Mass,… The sanctuary, which has been erected under the supervision of the architect, Mr. Henry Hunter, is in dimension 18ft. by 22ft., the height of the walls being 19ft.. Attached to it on the south-west side is a sacristy 16ft. by 14ft., both erections being plastered and completely finished, making the church a commodious and handsome building, excellently suited to the sacred purposes for which it has been erected. The altar window, most generously presented to the church by Mrs. John Young and her son, Mr. John Clay Young, depicts in rich colours the Three Mysteries—the Nativity, the Crucifixion, and the Resurrection, and is from the establishment of Messrs. Ashwin and Faulkner, of Sydney, the well-known glass-stainers, the capability of the firm being testified to by the fact that Mr. Ashwin prepared, when in London, a stained window for Westminster Abbey. The window is noticeable for the richness of its colours, and is a feature of the building of which its congregation has reason to be proud. It cost the sum of £100”.

Sacred Heart Church has long been connected with the school that now surrounds it. The foundation stone for the first dedicated building of Sacred Heart School was laid in 1887. The school was blessed and opened in 1888 and teaching was conducted by dedicated Catholic lay teachers until 1908 with the arrival of the Sisters of St Joseph of the Sacred Heart of Jesus. 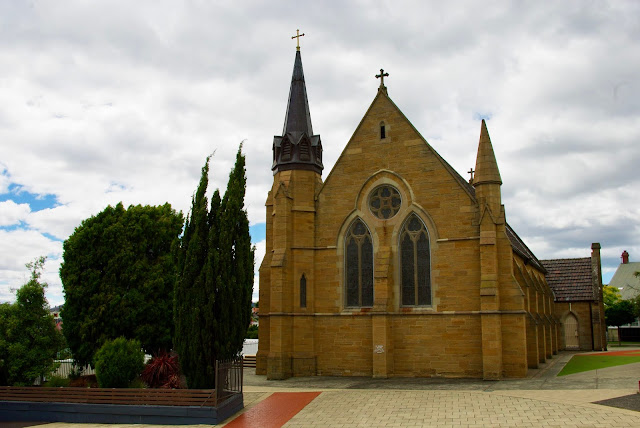 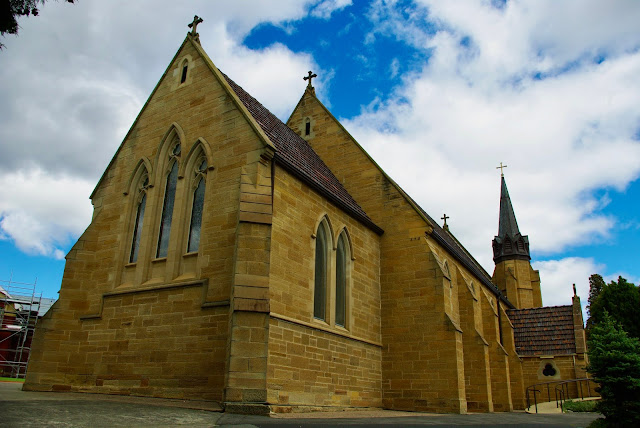 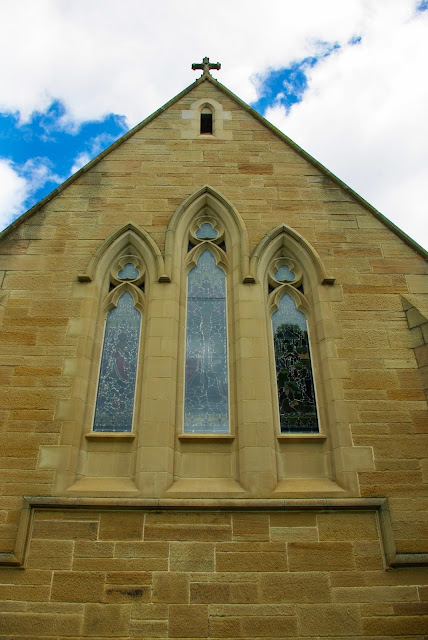 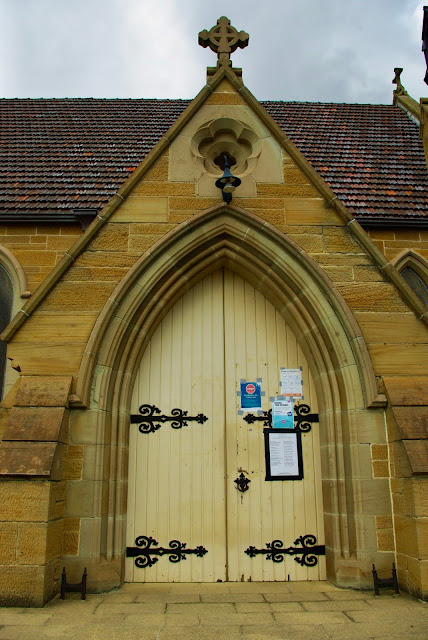 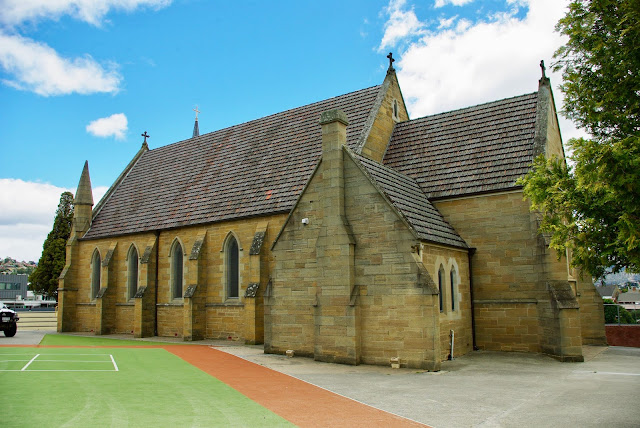 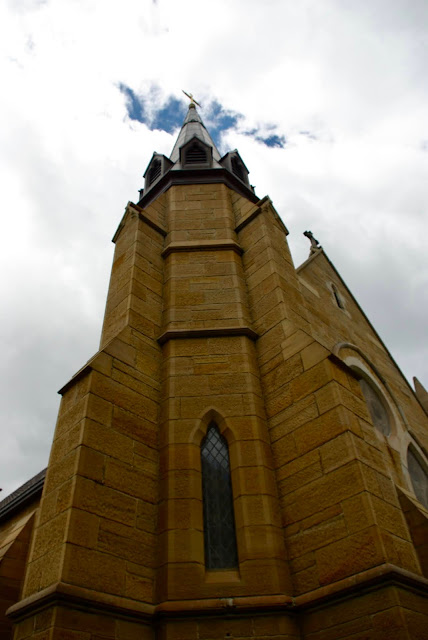 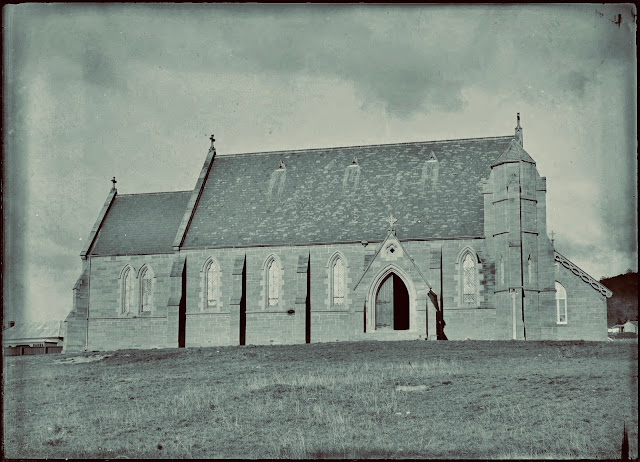 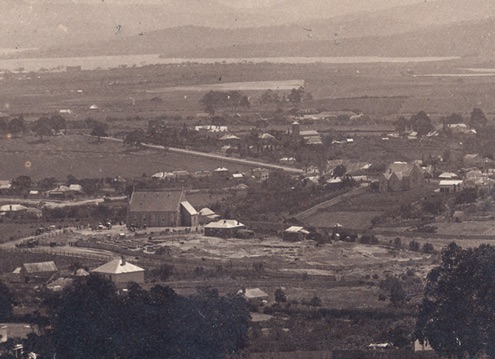 A detail of a photograph of New Town c.1880.  The New Town Congregational Church, Cross Street Methodist Church and Sacred Heart Church are all visible. Note that Sacred Heart's  sacristy is yet to be built and the end of the church is boarded up.
Photo source: eduprints UTAS  online collection. The full photograph can be seen below 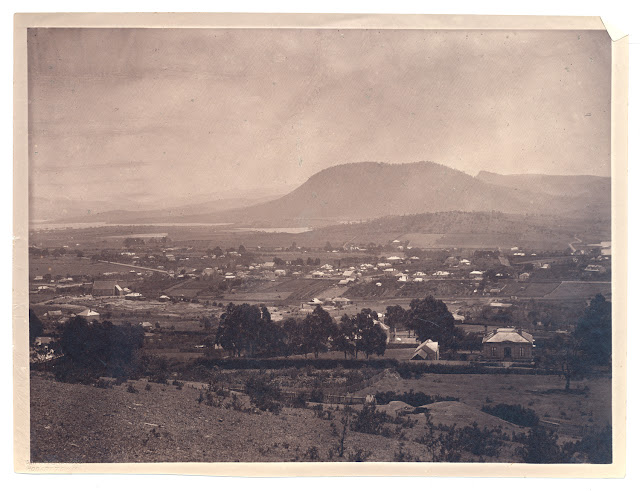 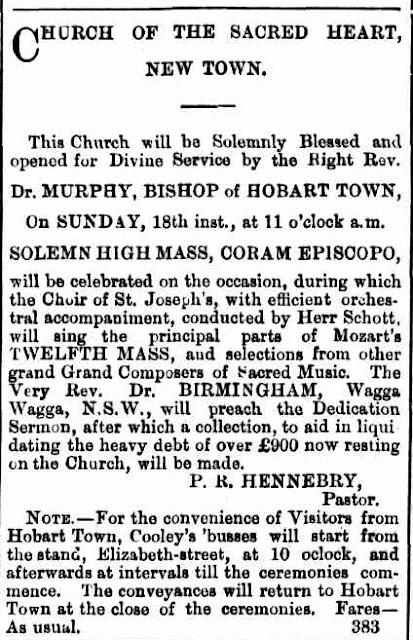