- April 30, 2021
The Religious Society of Friends, or Quakers have had a presence in Tasmania for almost 200 years. This blog entry will review the Quakers first meeting house which was established on Murray Street. This article is substantially based on the University of Tasmania’s Companion to Tasmanian History which was developed by the Centre for Tasmanian Historical Studies.

The history of the the ‘Society of Friends’ dates back to the early 1830s when two English Quakers, James Backhouse and George Washington Walker visited Van Diemen's Land with a mission to investigate contemporary Quaker concerns: the treatment of convicts and Aborigines, promoting temperance, and preaching the Gospel to settlers. The first Quaker meeting for worship in Australia took place in Hobart on 12 February 1832.

Encouraged by Lt-Governor Arthur, Backhouse and Walker spent three years visiting almost every convict and Aboriginal settlement. Detailed reports to to Governor Arthur as well as the Colonial Office and the Religious Society of Friends in London. They urged land rights and legal protection for Aborigines, and their reports and recommendations were influential in promoting penal reform.

In 1837 a property at Upper Murray Street was purchased and converted into a meeting house. About the same tIme land for a burial ground was acquired at Providence Valley (now Friends Park in Mellifont Street). The Murray Street house was used for religious services for 43 years before it was replaced by a purpose built Meeting House in 1880. The completion of the new Meeting House was described in a report in Hobart Mercury in September 1880:

“The Society of Friends, who have for the past 43 years been holding religious services in a very unpretentious looking building in the upper part of Murray-street, have just completed the erection of a most substantial meeting house, which is immediately behind the site occupied by the former. In erecting a building of considerable architectural beauty the Friends have sacrificed no principle. It was felt that the old building bore such a strong resemblance to a dwelling house as to suggest the utmost exclusiveness and privacy, and consequently proved a deterrent to the visits of strangers, and that for the sake of increased accommodation it was desirable that a larger building should be provided”.

“The new building is of the Tuscan style of architecture, and is calculated to denote a more earnest welcome for strangers than by a natural fancy was associated with the seemingly cold and uninviting exterior of the building which it replaces. The new building is fitted with everything that can conduce to the comfort of worshippers. It is about 55ft. from Murray-street. In front of the building is a small allotment of land, which will be enclosed with a suitable fence, that abutting on the street being of an ornamental kind. This space will be planted with shrubs, etc, which in the course of time will lend a charm to the building. It has a frontage of 41ft., while the total height is 28ft. The front consists of buff and white freestone. The first course of the wall is of white freestone, from which rise four pilasters, 7ft. apart and 14ft. in height. The pilasters support an entablature 4ft. in height, and this is surmounted by a pediment. The pilasters, mouldings, and reveals are of white stone, which contrasts very markedly with the buff coloured stone used in the hall”.

“The meeting room is reached by an entrance hall 9ft. by 9ft. On the right of this is a cloak room (13ft. by 12ft. 6in. ) for ladies, and on the left is another room (15ft, 6in. by 13ft ) which is to be used as a library, and also for committee meetings. The screen, which is generally erected inside of rooms used for religious services, in this case is situated in the hall. The screen is composed of three doors—a pair of folding doors directly in front of the doorway, and a door on the right by which entrance to the meeting room is obtained. The object of using this door is that the minds of those already in the building may not be distracted in any degree. The folding doors are generally thrown open to afford egress at the conclusion of the services. The woodwork is oak grained, and the upper panels of the doors are of grained glass. The screen conceals an arched entrance. The meeting room is 45ft. long, 26ft. wide, and 16ft. in height. It is designed to seat upwards of 200. At the end is a platform 18in. high, which is supplied with a hand-rail and balusters of polished lightwood. The ceiling is domed, and the room is lighted with four windows in each sidewall. The walls are tinted French grey, and the skirting boards are painted to match”.

“As the new seating has not yet been made, the forms which have done so much service in the old building are being used temporarily. The cost of the building, exclusive of what will be required for the seating and the fencing, was £1,115. That sum has been raised during the past six years by subscriptions, so that the building was opened practically free from debt. The builder's work was done by Mr. R. Shield, sen. ; the plasterer's, by Messrs. Paton Bros. ; and the painting by Messrs. C. Day and Son. The whole of the work has been faithfully done, and is of a substantial character. The old building, a portion of which stood in front of the new one, has been completely pulled down, and the last traces of the foundations are being removed”.

After struggling to maintain numbers in the mid-nineteenth century, the Quaker community in Hobart was strengthened after 1887 with the successful establishment of The Friends' School, which has become one of the best-known Quaker institutions in Australia. The choice of Hobart was largely due to the continuing influence of Backhouse and Walker, who had built up considerable local confidence in the Society of Friends. Tasmanian institutions with Quaker connections include the Hobart Savings Bank, Cadbury chocolate factory and St Ann's rest home.

In 1960 the Murray Street Meeting house was replaced by the present Meeting House on Boa Vista Road, adjacent to The Friends’ School on Argyle Street. 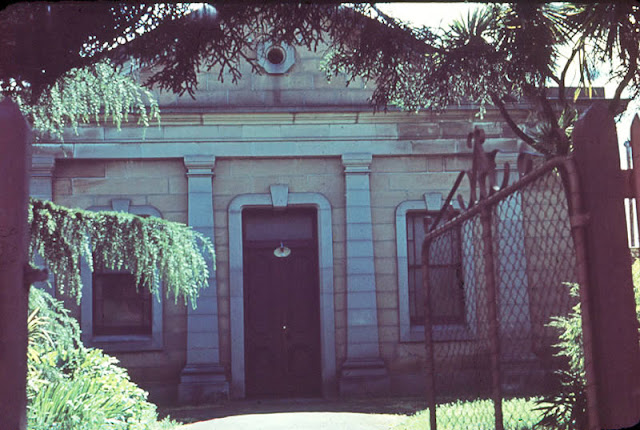 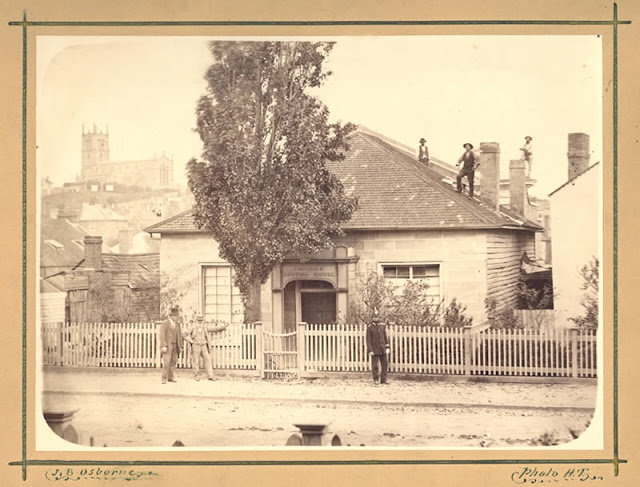 The original Meeting House on Murray Street c.1880.  The new Meeting House is under
construction in the background.  Image source: https://eprints.utas.edu.au/915/
Headstones from the old Quaker Cemetery - Now Friends Park in Mellifont Street 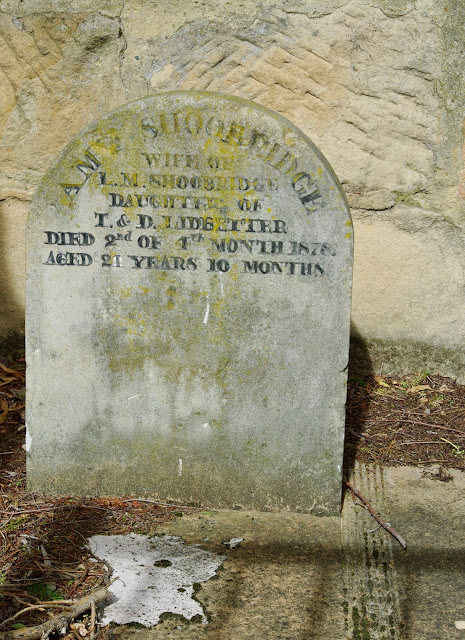 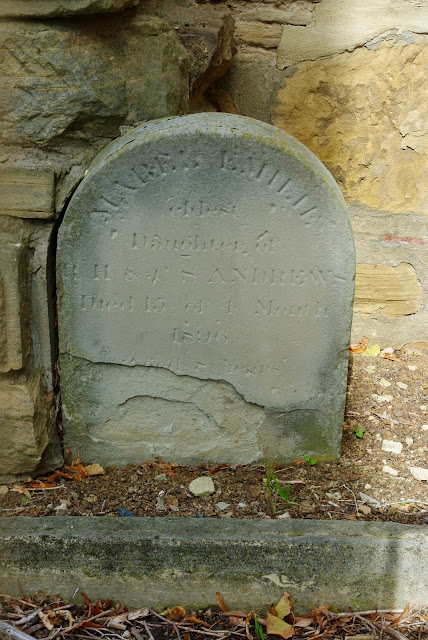 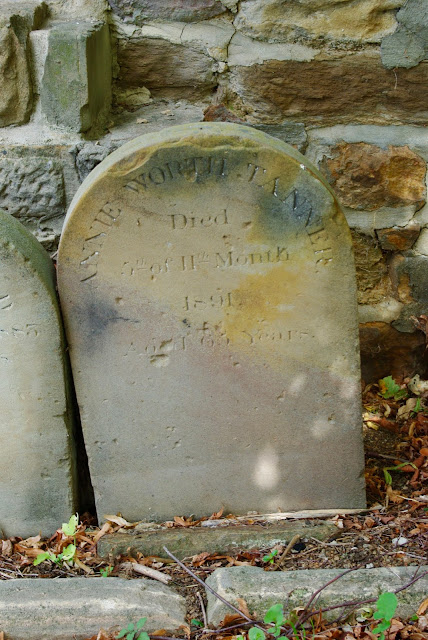 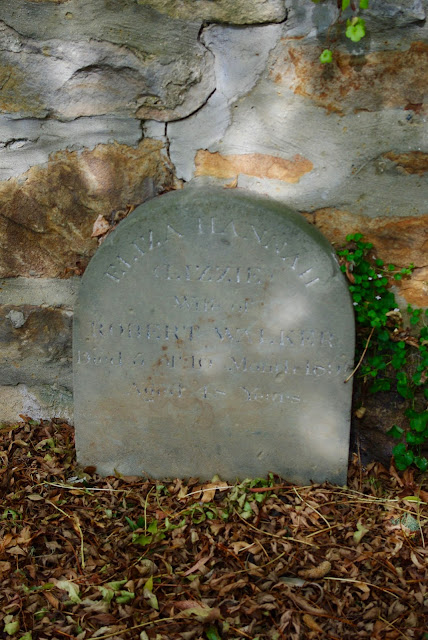 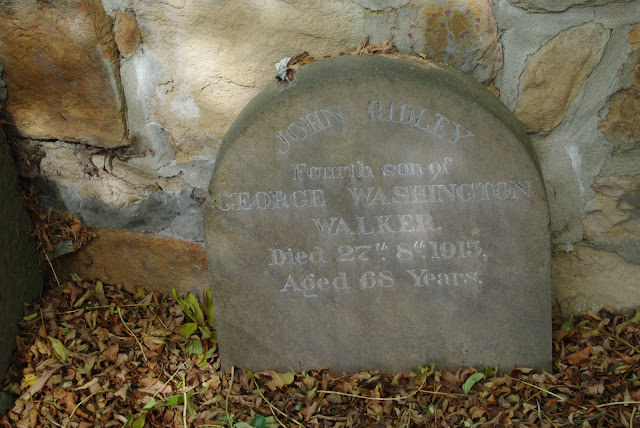 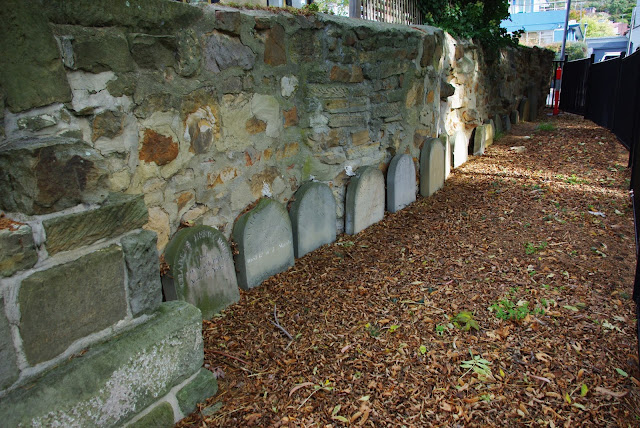 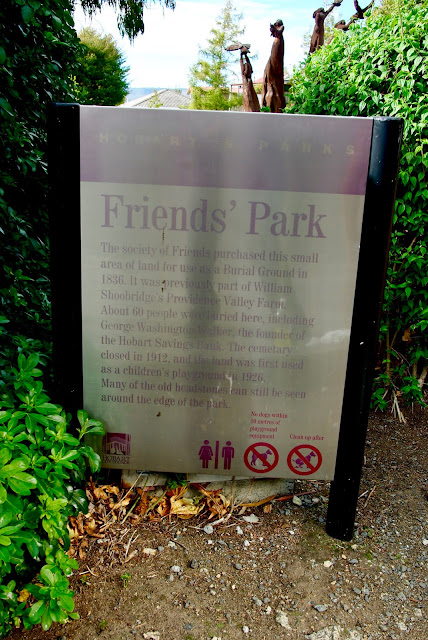