- May 08, 2021
Wivenhoe is a suburb of Burnie situated on the east bank of the Emu River. It has developed into an industrialised area less than 3 kilometres south-east of the city centre. In the 1850s the area was named after the town (and parish) of Wivenhoe in Essex County by Captain Henry Butler.

Wivenhoe’s former Anglican church stands near the corner of Corcellis Street and Main Road. The building still exists although it is now barely recognisable as a church. Since the church’s closure in the 1970s it has been clad in ‘colorbond’ sheeting and has been shifted to the rear of the corner block.

The origins of the church presents a mystery as there are no reports in contemporary newspapers of an Anglican church being built or opened at Wivenhoe. The reason for this is that the building was originally a Presbyterian church hall which opened in February 1915. [see No. 861].

The Presbyterian hall operated for less than four years and in July 1919 it was acquired by the Anglican church. The Emu Bay council had considered purchasing the building for use as a public hall but it was considered unfeasible to either enlarge it or move it to another site. It appears that the Anglicans were using the hall before 1919 thus its formal acquisition in the middle of that year was not publicly reported by the Burnie Advocate.

Records for the “Parish of Burnie Wivenhoe Church Hall”, including a register of services begin on the 13 July 1919. Advertisements for church services appear after this date but the earliest description of a service is in April 1920:

Up until this time the building was known as the “Wivenhoe church hall” but in 1922 it is referred to as the Wivenhoe Anglican church. In November 1922 the name “St Chad’s” is used for the first time. There is no record of the church’s dedication however in December 1922 the Bishop of Tasmania performed Holy communion at the church and the building was most likely dedicated to St Chad at this time.

After 1922 reports of activities at St Chad’s were frequently published in the Burnie Advocate but few of these contain details of any historical significance. One report in December 1923 records:

“At the morning service at St Chad’s Church, Wivenhoe, yesterday, a set of handsome altar rails, made and presented by Mr P.W. Baldwin, was dedicated by the rector (Rev. W.G. Thomas)”.

For many years St Chad’s had an active Anglican community. One church organisation that was particularly active was the Anglican Mothers’ Union. The Union was founded in 1876 by Mary Sumner at the parish of Old Alresford, near Winchester, where her husband was rector. She was inspired to start the movement after the birth of her first grandchild. Remembering her own difficulties when she was first a mother, Sumner wanted to bring mothers of all social classes together to provide support for one another and to be trained in motherhood, something which she saw as a vocation. By 1892 the Mothers' Union had reached Australia. Mrs L’Oste, wife of the Rector of Christ Church, Cullenswood, Tasmania, met with a small group of ladies on the verandah of the Rectory to form the first branch of the Mothers’ Union in Australia under her enthusiastic leadership. The Mothers’ Union at Burnie was established in 1905 as the “St George’s Mothers Union” and an active branch operated at St Chad’s from the mid 1930s through to the 1960s.

While St Chad’s existed for a little over 50 years, little information about the church and its community exists. After World War Two, the gradual industrialisation of Wivenhoe contributed to declining congregations and the closure of the suburbs churches. In September 1974, ‘Church News’ records that “this church [St Chad’s] is closed and is to be sold, the congregation to go to Burnie”.

Additional information about this church is welcomed as all articles are continually updated. I can be contacted through this page or my Facebook page "Churches of Tasmania" which is linked here: Churches of Tasmania.
Photographs of St Chad's:
Photographs of this church have been a challenge to find. Thank you to Robyn House, Margaret Harrison and Carol Frisby for providing the photographs used in this article. Hopefully, the publication of this article might result in the unearthing of more photographs. 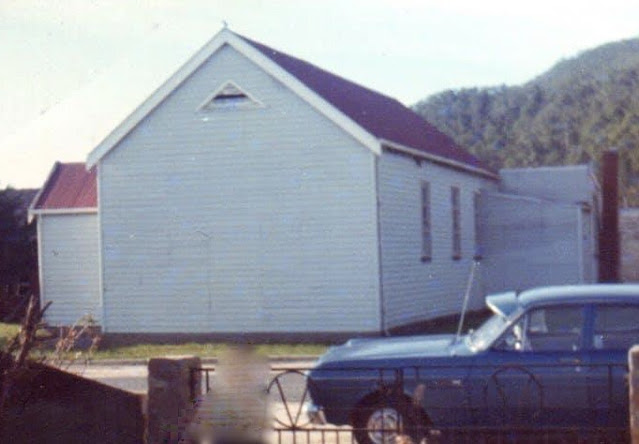