Stanley is a historic town on the northwest coast approximately 80 kilometres west of Burnie. The Van Diemen's Land Company once had its headquarters here when it was originally known as Circular Head. The settlement was later named after Lord Stanley, the Secretary of State for the Colonies, who went on to serve three terms as British Prime Minister.

Stanley has had four Catholic places of worship: Edward Curr’s Chapel at Highfield House (1838); a church built of timber (1850); a brick church (1897) and the present brick church (1931). This article’s focus is on the first brick church which stood for a little over 30 years before it was demolished in 1930.

In 1897 Stanley’s original weatherboard Catholic church was replaced after nearly a half a century of continual use. A new church was built alongside the original church which was later demolished. In January 1897 a visitor to Stanley noted the passing of the old building:

“Further up the main street we find the foundation of a new Roman Catholic Church, situated in the same allotment, and adjoining the old structure, and which, when completed, will be an ornament to the town. The main building is to be of brick, with cement and concrete foundations; and will be 25 x 40 feet clear inside, with a porch or entrance of 9 x 7 feet, with brick ornamental gables, 15 feet high from floor to principals, and provision has been made to extend the building, with chancel and vestry, should necessity require it, to 50 feet. Taken altogether, it will be a handsome edifice, and a credit to the builders, viz-, Messrs J. and T. Gunn (of Launceston), with Mr Luttrell as architect, and Mr J. Hill, the well-known builder, in charge. The contract price is £525, and the foundation stone is to be laid by the Bev. M. Beechinor, from Deloraine on Sunday, January 31. The structure above described takes the place of an ancient wooden edifice…”.

The ceremonial lay of the foundation stone was recorded by Launceston’s Daily Telegraph:

“On Sunday, 31st ult., the interesting ceremony of laying the foundation stone of the new Roman Catholic church at Stanley was performed by Dean Beechinor, assisted by the local pastor, the Rev. B. A. Cunningham. The impressive ceremony was witnessed by a numerous assembly embracing every denomination, by whom the proceedings were regarded with deep interest. At the close of the ceremonial contributions in aid of the building fund were invited, and the appeal met with prompt response, some £20 being subscribed on the ground. The ordinary church services also attracted large congregations, to whom Dean Beechinor delivered earnest addresses appropriate to the occasion of his visit….”.

The construction of the new brick church was competed within six months and was officially opened on Sunday 18 July 1897 by the Rev. Dean Beechinor, assisted by the Rev. Fathers Cunningham and Higgins. Lack of funds had determined that the church was not built to plan with the nave shortened by 10 feet while provision was made for the sacristy and chancel to be added at a later time.

It is possible that compromises were made in the churches construction. While the walls were solid, no cavity was left between the courses which resulted in moisture seeping into the church. Instead of enlarging the church as had been planned, it was decided to demolish the building and replace it with a larger structure. After only 32 years, the church was demolished and replaced by a new building which opened in 1931.

Three early aerial photographs (postcards) of Stanley (c.1920) in which the town's four churches can be seen. (Catholic, Presbyterian, Methodist and Anglican). 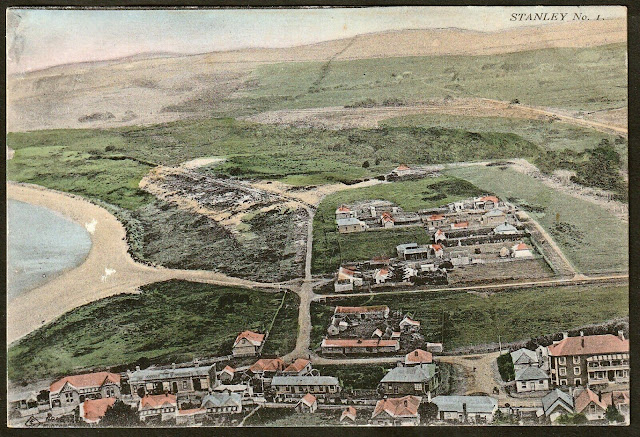 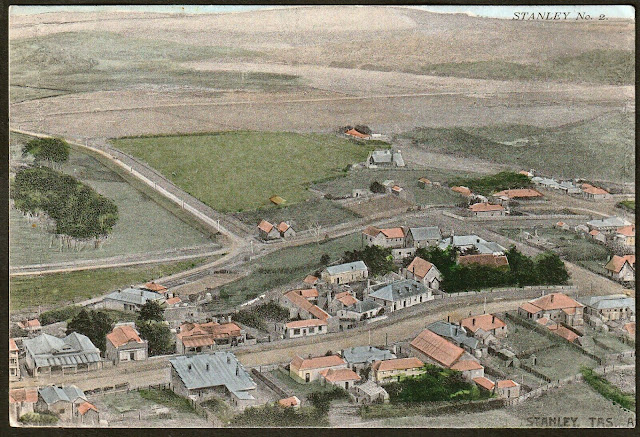 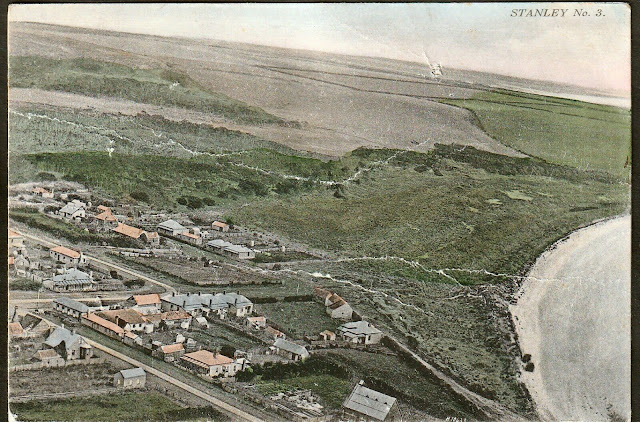