Anglican services at Marrawah seem to have first been held in November 1898, only a decade after the district was opened for selection:

“The Rev. Keith Forbes, of Melbourne, at present acting as the locum tenens of the Anglican incumbent, recently visited Marrawah, the most remote agricultural settlement in this large district. The weather proved most enjoyable, and the rough country between Montagu and Marrawah was traversed without meeting any serious impediment to progress. The visitor was gladly received and hospitably entertained at Marrawah, and found in the little settlement so recently reclaimed from the forest such evidences of energy and endurance as, could not fall to win his admiration for the indomitable pluck of the sturdy selector. In the near future let us hope to find others of the clergy preaching in the wilderness of Marrawah, whose people may possibly need quite as much spiritual consolation as do others more favoured”.

After 1907 Anglican services were regularly held and the construction of a church hall was considered. In May 1907 a report in the Circular Head Chronicle describes a thriving Anglican community at Marrawah:

“Despite the unfavourable night last Friday there was a very large attendance (between 40 and 50) at the Anglican service, conducted by the Rev. G. W. Ratten, whom we are always so pleased see. By his genial manner and kindly visitations he has won many hearts and the steady progress the church is making under his ministration is an evidence. He also takes an interest in the development and welfare of the district. A splendid meeting was held after the service, when Mr Ratten strongly advocated the building of a suitable hall for the requirements of the place, for holding divine service, Sunday school, etc. It was not the opportune time yet for building a church but he hoped it would not be far distant. There were splendid responses to his appeal. Mr Moore promised to sell the timber at half rate, Mr Marshall to give labour as carpenter to value of £5, Messrs A. W. Ford and E. Evans to cart timber and stones, and there are many promises of donations in cash. Mr Ratten also mentioned that he was taking steps to secure a site for a burial ground, and at the same time would apply for one for the hall. He organised entertainments to be held frequently to provide for the building fund. He also stated that Mr Moore had kindly granted free of charge his factory for the purpose of allowing the Sunday school children to use it, till the building of the hall. When it is erected, it will prove a great boon to all….”

A decade was to pass before significant progress was made towards building a church. In May 1919 Mr F.W. (Eric) Ford donated land for a church to be built as a memorial to the men of Marrawah who had lost their lives in the Great War. Through the 1920s fundraising to build a church became the focus of the Anglican community. The goal was at last realised in August 1931 when the Circular Head Chronicle recorded:

“After many years of waiting, Wednesday, August 5th, saw the laying of the foundation stone of the new Church of England at Marrawah. The ceremony was performed by the Archdeacon of Darwin, the Venerable H. B Atkinson, assisted by the Rector, the Rev. H. C. Cuthbertson. The weather managed to be fine for the afternoon, and there was a large gathering, many coming up from Redpa. The Rector took part of the service, and after reading the scroll placed it under the foundation stone….Over £16 was placed on the stone….The church, which is being built by Messrs. J. S. Lee & Sons and Mr. W. Poole, was designed by Mr. P. H. Cuthbertson of Hobart, and has seating accommodation for about 90 people. The nave is 30 feet by 20 feet, with a chancel 14 feet by 12 feet and a porch 7 feet by 7 feet. The building is of Gothic design and Is intended eventually to have a spire over the entrance porch. The interior is to be lined with hardwood dado and ceiling and plaster walls. The site, which was given many years ago by Mr. Eric Ford, is ideal, being in one of the best spots of Marrawah and lending itself to being made beautiful, which is not being overlooked by the congregation. It hopes to have the church completed in ten weeks, and it will be dedicated by the Bishop in November….”.

St Oswald's was opened and dedicated on Saturday 21 November 1931:

“On Saturday, prior to the confirmation service, the Anglican Bishop of Tasmania (Dr. Hay) dedicated the new church of St. Oswald's, Marrawah….The church was crowded on the occasion of the dedication, many visitors being present from Redpa, Temma Montagu and Smithton. Dr. Hay congratulated tho parishioners on being the possessors of such a beautiful church and expressed the hope that it would mean a lot in the lives of the people and that they would realise what the church stood for - sacrifice, service and worship.…”

While the sacrifice and struggle to build St Oswald’s was over 30 years in the making, the church ultimately could not withstand the forces of rural depopulation. In 2001 St Oswald’s marked its 70th anniversary which was to be its last significant celebration before the final service in November 2015. The church was sold in the following year. 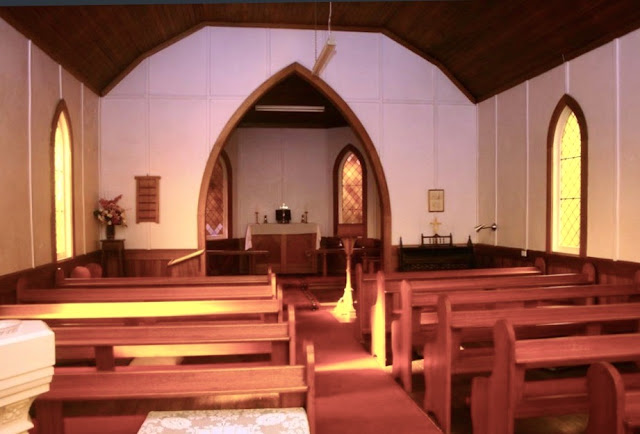