- June 02, 2021
Elliott is a rural settlement on the Murchison Highway, approximately 10 kilometres south of Somerset. The settlement is named after Captain Elliott who owned land near the junction of the Highway and Village Lane. The area is commonly referred to as Cam Road up until the turn of the 20th century.

There is little published information available about the establishment of St Paul’s Anglican church Elliot. Geoffrey Stephens, [The Anglican Church in Tasmania Diocesan Sesquicentenary], states that the church was built in 1896 and that services were held at Mr Gale’s house from 1894. However, newspaper records advertising church services reveal that Anglican services were still being held at Mr Gale’s house in August 1897.

In June 1899, the Launceston Examiner reported that a:

“New Anglican Church is…in the course of construction…for the use of the Cam Road residents.This building is situated about six miles from the township [of Somerset]”.

Confirmation of the church’s opening comes from a report published in the North Western Advocate and the Emu Bay Times in February 1900:

“A new Anglican church at Cam road was opened yesterday afternoon. The building is so constructed to allow of its being extended at a future date; it now seats about 100 persons. The Reverend Tryon Wilson conducted the opening service, there being a crowded congregation….arrangements have now been made for the holding of regular services at the church”.

As Elliot lacked a public hall, St Paul’s was used as a hall and as a school room until these buildings were constructed. The church was enlarged in 1921 and a side porch and entrance was built. In 1950 St Paul’s became a part of the Cooee parish.
The church closed in the 1970s and was sold in October 1977. 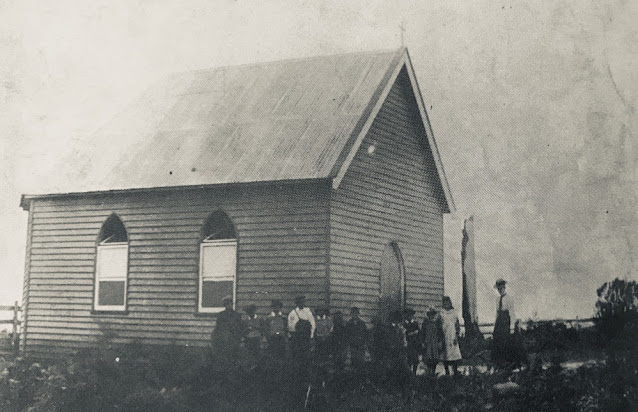 St Paul's Anglican Church at Elliot before it was enlarged. (undated) Libraries Tasmania