Prominently situated on the crest of what was once called ‘Potter’s Hill’, Holy Trinity Church is one of Hobart’s most iconic colonial churches. October 2021 will mark 180 years since the laying of Holy Trinity’s foundation stone. Upon the centenary of Holy Trinity’s opening celebrated in 1948, it was noted that the church and its parish had recorded 13 645 baptisms, 4694 marriages and 9653 funerals. No small number of descendants of these Tasmanians have a connection to this church on the hill.

‘Trinity parish’ dates back to 1833 with the appointment of Reverend Philip Palmer as the Rural Dean of Hobart.  The old gaol chapel, later known as ‘Old Trinity’ was the parish’s first church. From 1845 to 1847 a Wesleyan chapel on High Street (now Tasma Street) was used as a place of worship before the completion and opening of Holy Trinity in January 1848.

Holy Trinity was designed in the Gothic Revival style by James Blackburn. The church was built along a north-south axis and was constructed with the use of convict labour.  The foundation stone was laid on Wednesday 20 October 1841 by Lieutenant-Governor Sir John Franklin with the event reported by the Courier:

“The first stone of this edifice was laid on Wednesday afternoon last by His Excellency the Lieutenant-Governor, in the presence of a large attendance of the clergy and a considerable concourse of spectators. His Excellency and all the officials were in full dress. After the usual preparatory arrangements, the Rev. P. Palmer preceded the depositing of the stone by an appropriate prayer and blessing on the work. An inscription, stating the date, &c., of the laying of the stone, together with some coins, were secured in a bottle and placed in the receptacle hollowed out in the lower stone; …The interesting ceremony was closed by the Rev. W. Bedford delivering a very feeling and appropriate address, in which he adverted to the well-directed liberality of the Government in setting aside £2000 for the erection of this church, ….The band of the 51st Regiment was in attendance, and performed some appropriate music, though we cannot resist the impression that this was a most incongruous feature of so solemn an occasion”.

A description of the building’s architectural features and technical details was published by the Courier in the following week:

“It is to be built of freestone from the domain quarry. It is designed in the style of the first period of the pointed architecture - of the date of the thirteenth century, and whose distinguishing features are the narrow lancet-headed window and the deep projecting hooded buttress. It has a clerestory supported on twelve arches, a lofty tower, calculated to hold a peal of bells, and a lateral porch. The chancel is twenty feet deep, carried to the height of the nave, and is flanked by two octagonal buttresses surmounted by pinnacles: the chancel contains a lofty triple lance window. The tower entrance is deeply recessed in reveals enriched by shafts and mouldings ; so likewise is the porch entrance, above which are sculptured the arms of the bishopric. The external angles of the porch and aisles, as well as the buttresses of the tower, are surmounted by pinnacles. The length of the church, from the tower door to the chancel window, is 146 feet; the extreme internal breadth is 46 feet; the breadth of the nave is 23 feet ; the height, from the floor to the ceiling of the nave, is 35 feet; the height of the tower, from the ground to the top of the battlements, is 74 feet, and to the summit of the pinnacles 36 feet. The architect to whom the design and execution of this most interesting work has been entrusted is Mr. Blackburn, …The builders are Messrs. Cleghorn and Anderson, …”

By mid 1842 substantial progress had been made with construction. At this time the incomplete building was frequently referred to as “Trinity Cathedral”, perhaps due to its impressive dimensions or the hope that it might become the seat for the first bishop of Van Diemen's Land.

In June 1842 the Colonial Times described the progress made with “Trinity Cathedral”:

“This fine building already constitutes a striking object from many parts of the town. Despite the difficulties with which the contractors have had to contend, they are now proceeding rapidly towards the completion of the building. The walls of the cloisters are raised to their height, and the columns of the nave, fourteen feet high, are completed a very handsome shield, for the armorial bearings of Sir John Franklin, is in progress, which will be placed over the tower entrance, while the arms of the diocese will ornament the porch. There is another over the have to be erected, which will be finished in about six months, when the edifice will be roofed in. The large window, in three compartments, facing the town, will be twenty-four feet in height, to the apex of the arch, and will consist of painted glass, from England. A subscription is to be immediately set on foot, headed by His Excellency, for a set of eight bells, which are also to be forthwith ordered from England….”.

After 1842 progress on the building slowed due to limited funds. With the conclusion of the first building contract, there was a considerable delay in completing the church with the second contract only advertising for tenders in June 1847.  Soon after the fulfilment of the first contract the Rural Dean, Reverend Palmer, visited England where he “collected a very considerable sum towards completing the church and procuring the bells”.  Among those contributing to the building fund was was Dowager Queen Adelaide.

As a consequence of Palmer’s efforts Holy Trinity was finally completed by close of 1847 and opened in January 1848.  The church was formally consecrated on St John the Evangelist Day, December 27, 1849.

A significant feature of Holy Trinity is its peal of eight bells.  These were purchased from Mears and Stainbank of Whitechapel, London, at a cost of £500.  The bells accompanied Reverend Palmer on his return from England in 1847.  The weight of the tenor bell, which is he heaviest, was 10cwt, approximately half a ton.  Cast on it in raised letters is the inscription “Their sound is gone out into all lands, and their words into the ends of the world”.  The bells were rung for the first time on Regatta Day, Friday 1 December 1848.

In 1899, upon the 50th anniversary of Holy Trinity’s consecration, the Tasmanian Mail published a fascinating article about the church’s bells:

“Mr Champion, a brewer, residing in Melville-street, took much interest in procuring the bells and in the training of the first ringers.  Few persons know that the old English method of bellringing requires considerable training in order to obtain anything like proficiency in it.  Change ringing is quite a science with a terminology of its own, which is quite unintelligible to the uninitiated. There are not many people in Tasmania who know the meaning of “triple bob majors,” and of the terms “bobs” and “dodges,” as applied to bell-ringing.  A peal of bells is the greatest number of changes which can be produced upon a given number of bells without their being sounded more than once in the same order. A peal of eight bells consists of 5040 changes, and takes between two and three hours to ring.  Only two complete peals have ever been rung upon Trinity bells, and these were by the members of the Victorian Society of Bellringers in 1890. Before that time only one complete peal had ever been rung south of the Line. A marble tablet in the wall of the belfry commemorates the feat of the Victorian ringers, of which they are justly proud….”.

Over the years Holy Trinity has undergone many changes and improvements including the replacement and fitting of new stained glass windows and the removal of the original enclosed pews.  In 1868 a stone wall with an iron gateway was built to enclose the church. From the earliest years maintenance of the building has been a costly challenge. In 1877 the walls of the church were pointed with cement and the roof was re-shingled and the windows re-leaded. The church’s most serious challenge is the deterioration of the exterior sandstone walls.

In February 2007 an assessment of the structure estimated that $5 million was needed to restore the church. Soon after this the parish council petitioned the Bishop of Tasmania, Rt. Rev. John Harrower, to deconsecrate the building. The church was subsequently closed and the final service was held on 28 October 2007. The Holy Trinity Church Charitable Trust was formed in November 2007 in an effort to preserve the building. The Trust requested the Anglican Church transfer the property to facilitate its preservation but it was instead sold to the Greek Orthodox Archdiocese of Australia. From 2015 extensive and ongoing repairs to the church have been undertaken and the building has taken on a colourful new life under the care of the Greek Orthodox Church.

* All colour photographs used in this article are my own. 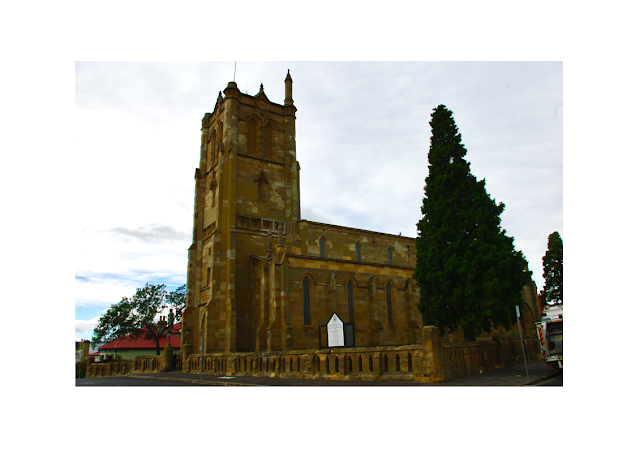 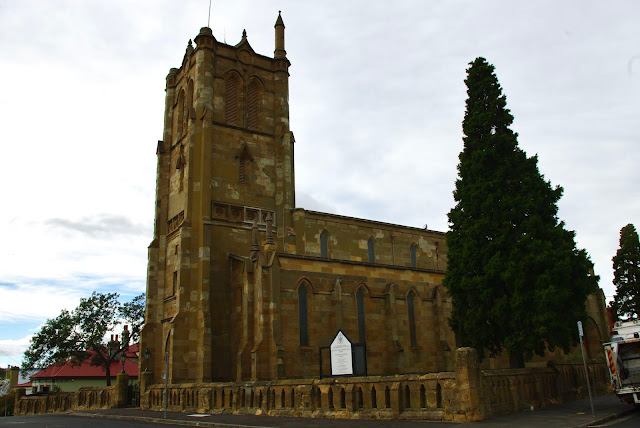 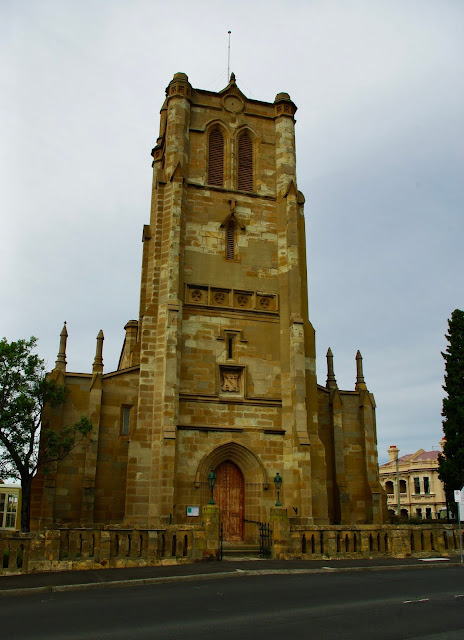 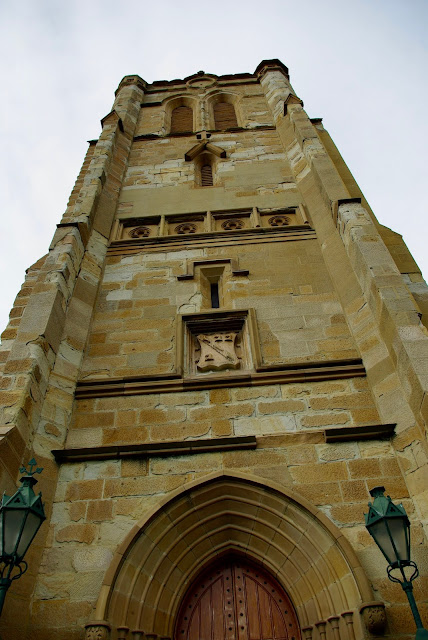 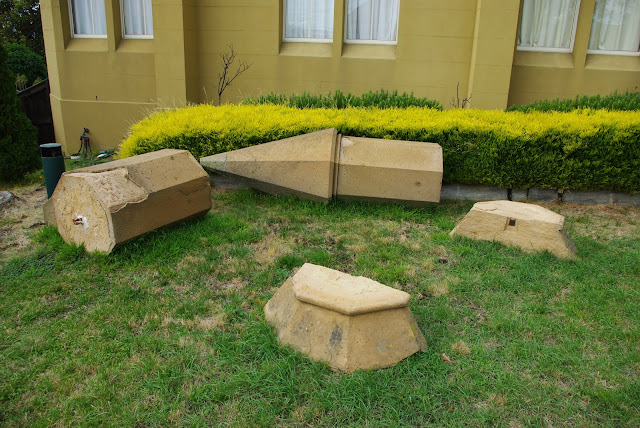 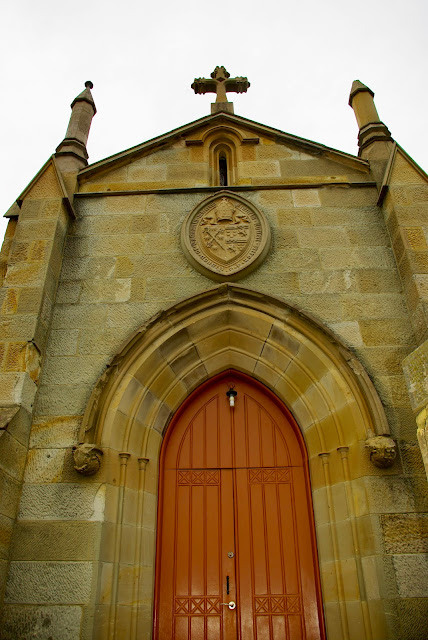 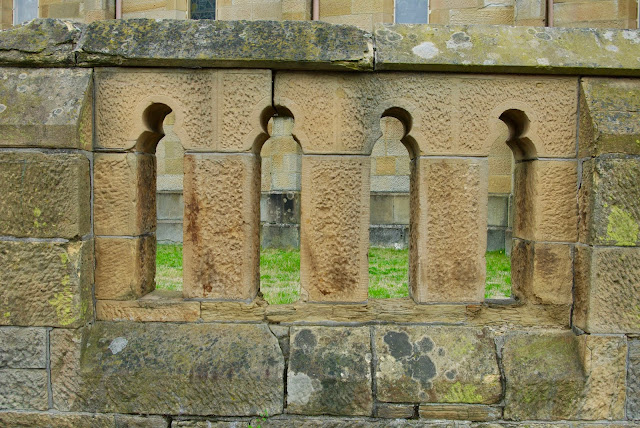 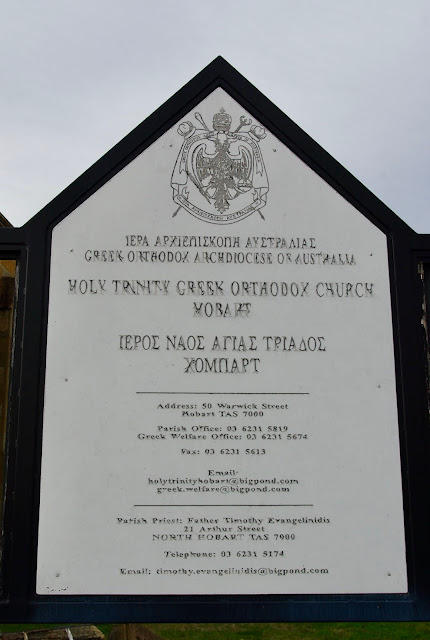 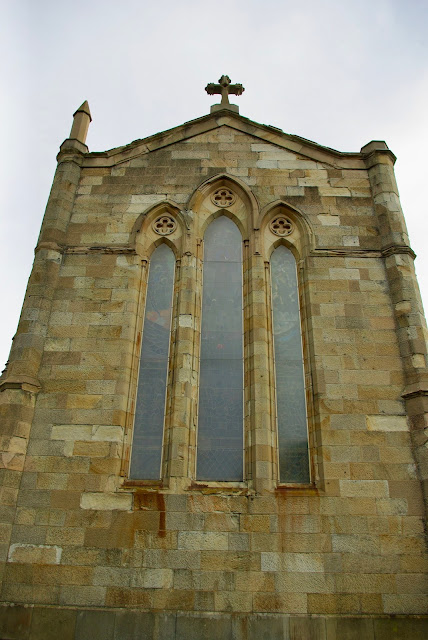 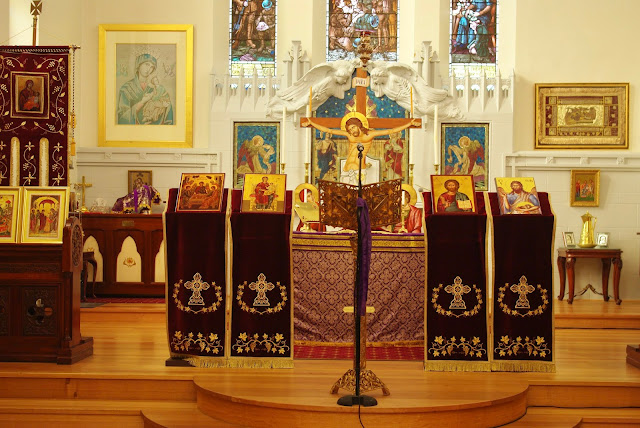 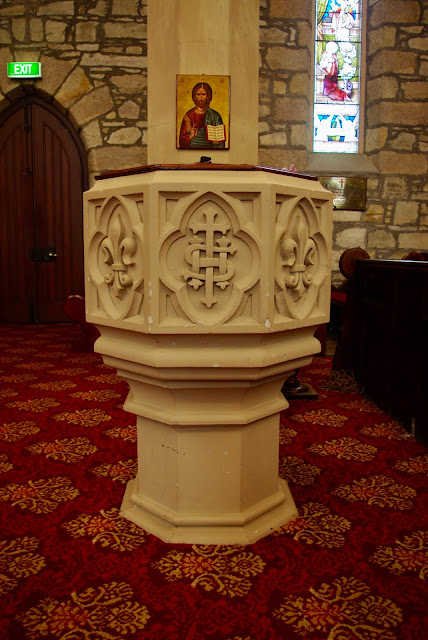 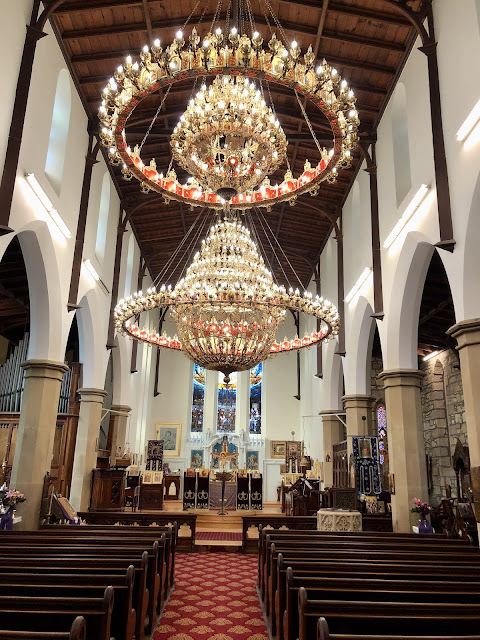 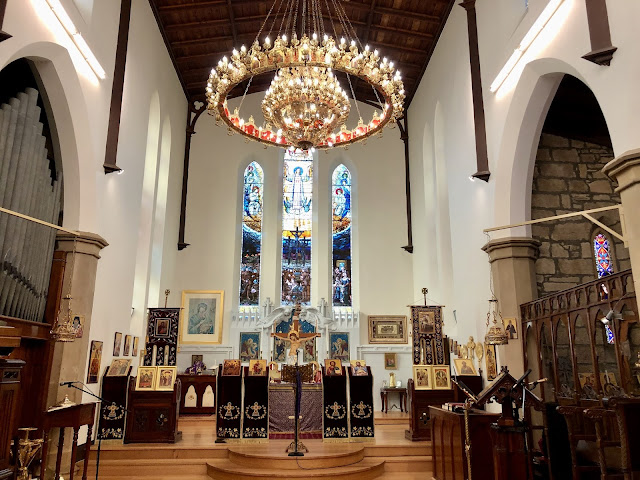