- October 10, 2021
The suburb of North Hobart, as the same suggests, is on the northern fringe of the city centre. It has evolved into a mixed residential and commercial area since it was developed in the 1830s.

The Church of Jesus Christ of Latter-day Saints, first appeared in Tasmania in the 1850s, when missionaries began to proselytise in Hobart. In the face of opposition, congregations were established in Hobart in 1894 and in the Upper Huon in 1899. However, it was not until 1924 that the first chapel was built at Lefroy Street, North Hobart, which was followed by a second chapel built at Glen Huon in 1927.

Before the turn of the 20th century meetings of the Hobart Church were held in members’ homes. As numbers grew meetings were held in a building on the corner of Liverpool and Elizabeth Streets, where the National Australia Bank now stands. In the early 1900s meetings were held in the Rialto Hall, on the corner of Davey and Harrington Streets. By the early 1920s the Hobart Branch met in the Victoria Hall in Victoria Street and a two storey house at 13 Gladstone Street. By this time membership had grown to a size that a purpose-built chapel was considered and consequently land was purchased on Lefroy Street.

The foundation stone of the Lefroy Street church was ceremonially laid on Saturday 29 November 1924. A lengthy article published in the Hobart Mercury provides details of the church’s establishment as well as information about the building itself:

“For several years a small body of believers in "The Church of Jesus Christ of Latter Day Saints," commonly termed Mormons, has held Sunday services in the Victoria-hall, and a Sunday school, mutual and "relief" meetings in Gladstone-street. The members have gradually grown in numbers, and on Saturday afternoon the corner stone of a church which they are erecting in Lefroy-street was laid”.

“A block of land for the purpose was purchased from Messrs. Henry and Allen for £300, and thereon the church building with rooms at the back for three or four elders is being erected at a cost in all of about £2,000. The church is to seat 170 persons, and will be built of brick, with a corrugated iron roof, and it is hoped to complete it for opening by the end of January. Mr. Leonard Hocking, of Melbourne, is the architect, and the erection is being carried out under the direction of Mr. Chas. H. Hyde, an elder of the church, who superintends all works of this description throughout Australia. The actual work of construction will be done by donated labour and day work by masons etc. Elder Leon Robins, who, like Elder Hyde, hails from Utah, will conduct the services in the new edifice, and will have associated with him three other elders, and there are two at Launceston”.

“The ceremony of laying the corner stone (a large square block of freestone) was conducted by Elder Leon Robins and Elder Hyde, and was carried out in the presence of between 50 and 60 people of both sexes. "The Gospel Standard High is Raised " was sung, and this was followed by prayer. Next came the singing of "How Firm a Foundation Ye Saints of the Lord" and then Elder Hyde formally laid the stone in a cavity, beneath which was first placed a tin box containing a record of the church and some current coins, etc., and a photograph was taken of the scene by Mr. J. W. Beattie”.

“Elder Hyde congratulated the “Saints" present on their efforts, through their faith, good works and liberality. He outlined the history of the Latter Day Saints movement from its beginning in Ohio in 1834, ….Elder Robins outlined visits of elders to Hobart as missionaries as far back as 1854, until Elder Granger three years ago started the movement to erect the church, the corner stone of which had just been laid. In June last they were able to raise sufficient money to purchase the site, and the work of digging the foundations commenced last October…..”.

The building was completed in early in the following year and the chapel was officially opened on Saturday 21 February 1925 and dedicated on the following day.

The chapel had a two story section at the rear of the hall and the upper story served as accomodation for missionaries. On occasion, the missionaries bedroom was used as a classroom for Sunday School. As the chapel had no baptismal font, baptisms were conducted in the Sandy Bay Baths and also at the Domain Baths at Cornelian Bay.

As membership of the church grew, consideration was given to extending the church by building on an adjacent vacant block. However, a decision was made to build a large modern church at Rosny. The last meeting at Lefroy Street took place on 7 September 1958. Soon after this the building was sold to the Lutheran Church. It was again sold in 1974 to the Full Gospel Church which is now the River City Christian Church. 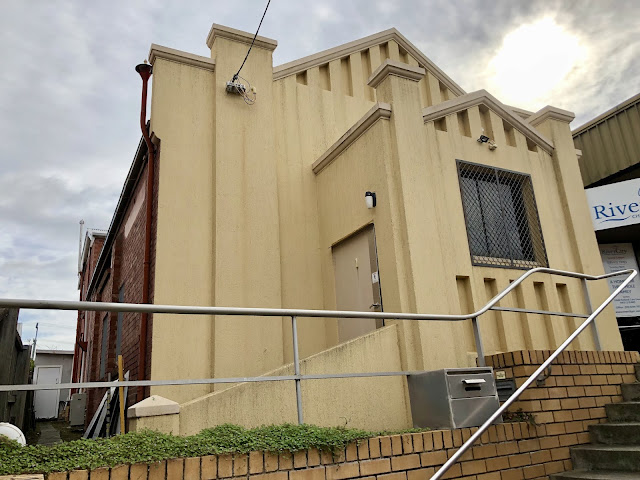