- January 16, 2022
The former Mission Chapel is located on lower Campbell Street in a dockside area previously known as Wapping. The Mission was an extension of St David’s Cathedral, as an outreach to the “poorer classes” living in a deprived and disreputable part of the city.

The Mission’s foundation stone was ceremonially laid by the Bishop of Tasmania on Monday 24 November 1884. A lengthy report of the ceremony was published in the Hobart Mercury. This provides details about the Mission’s origins and of the building’s function and appearance:

“It is now over two years since a movement was set on foot to establish a mission chapel in connection with St. David's Cathedral, with the object of more effectively reaching the poorer classes of the city. The late incumbent, the Very Rev. Dean Bromby, entered with his usual zeal and heartiness into the project, and chiefly through his instrumentality a fund was opened, towards which collections have been made monthly in the cathedral and parish of St. David’s”.

“The site chosen for the new chapel is in Lower Campbell-street, a few doors below Lower Collins-street, and opposite the Exhibition-building. It is thus on the confines of that portion of the city known generally as Wapping, embracing some of the poorest population in the city, and presenting a wide field for missionary enterprise”.

“The design of the new building was entrusted to Mr. H. Hunter, architect, of Macquarie-street, who has prepared plans of a structure which will cost about £1,500. It will be in plain Gothic style, and built of brick, with stone dressings. The interior will consist almost entirely of one long nave, 81ft. by 32ft., from which a chancel of about 19ft in depth will be screened off. There will be a vestry in the south-east corner, 14ft. 6in. by 6ft. 6in., and a timber belfry will mount the front gable. The building will have sitting accommodation for about 300 people, and will be comfortably fitted up. The contractors are Messrs. Sharpe, Harrison, and Inches…. The foundations, which are of concrete and stone, have already been completed, and a good portion of the brick work in the front of the building erected. The funds in hand to date…. amount to about £1,190, so that in a very short time the building should be fully paid for”.

The unusual ceremony timing of the ceremony, being in the early evening of a Monday afternoon, was probably due to the Diocesan Synod being in session at the time. The Mercury reported:

“The ceremony of laying the corner-stone of the new chapel was performed yesterday evening, by the Bishop of Tasmania, Right Rev. Dr. Sandford. The time chosen for the event - 5 o'clock - was unusual, and the weather was very bleak and cold, but, not withstanding these drawbacks, a large number of persons assembled to witness the ceremony, including many ladies belonging to the congregation of St. David's. A timber platform had been laid over the foundations, and afforded an excellent vantage ground for the spectators. Owing to the Diocesan Synod being in session, a large number of clergy were able to be present, about 18 of them accompanying the bishop in their full vestments…..The choristers of St. David's Cathedral were also in attendance, and were of great assistance in the choral portion of the service, being led by Mr. W. P. Little, who played the accompaniments on a cabinet organ…”.

The building was completed in about 7 months and was officially opened on Sunday 12 July 1885. A report in The Mercury provides a few more details about the Mission:

“…The chapel, which was so auspiciously opened yesterday, is in the plain Gothic style of architecture, and is built of brick with stone dressing. Above the western elevation is a neat miniature belfry, in which it is intended to place a bell as soon as a suitable one can be obtained.… It was proposed in the first plan to screen off a chancel of about 10ft. in depth, as the chapel is to be used as a school, as well as for religious services, but this part of the scheme was abandoned. Instead of this, the altar, which is well raised, is merely railed off, and the building is thus open from end to end”.

“The altar, which is composed of stained cedar and beautifully proportioned, is the kind gift of Mr. A. J. Lumsden, and has been executed with taste and skill by Mr. Samson, of Hobart. ….Above the altar in the eastern elevation is a "rose" window. It is to be filled in with stained glass by Miss Parsons, Brown's River, and when completed will have a pretty and effective appearance….The walls are painted a bluish grey, with a dado of a darker hue, and the seats, which have been supplied by Mr. Smith, are very nicely varnished. About 20 of the seats have reversible backs, and these will be used for school purposes…”.

With respect to the Mission’s purpose, Bishop Sandford explained:

“There would be no difference in the outward arrangements as to the accommodation between rich and poor as the seats were all free, and he was anxious that the church would be used too by those for whom it was chiefly intended. There was an ample population in the district to fill the church, and it should be used not merely on Sunday for purposes of worship, but also of instruction throughout the week. No large congregation reported as gathering in this place would satisfy him unless it was composed of the poorer classes, because his earnest desire was that the congregation should be drawn from the locality in which the church was situated. He hoped that these people would be brought week after week into this building, and that it would be a means of good, and bring many to a sense of their spiritual duty to God and man”.

Sanford’s vision of the Mission as a magnet for Wapping’s poorer classes was not realised at its opening. Launceston’s Daily Telegraph report on the opening noted:

“There was a large congregation present, but not so many of the special class for which the chapel has been built as the well-wishers of the cause desired to see. The hope is that they will yet come in constantly increasing numbers”.

The Mission Chapel opened at a time when new and more exciting religious denominations such as the Salvation Army and a variety of evangelical groups had become active in Hobart, competing for the attention of the city's working class. However, Wapping’s decline as a residential area was probably the main factor that contributed to the Mission’s closure in 1914. 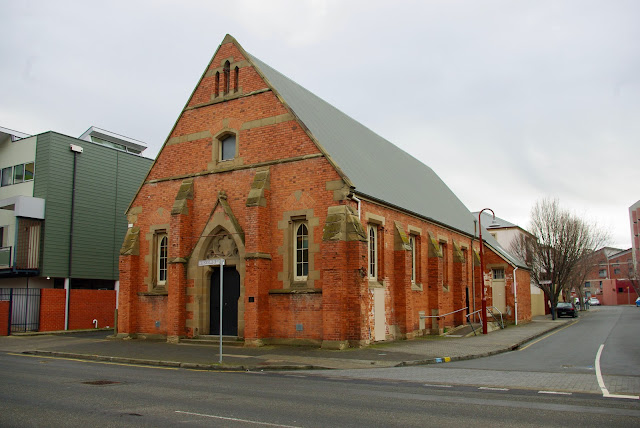 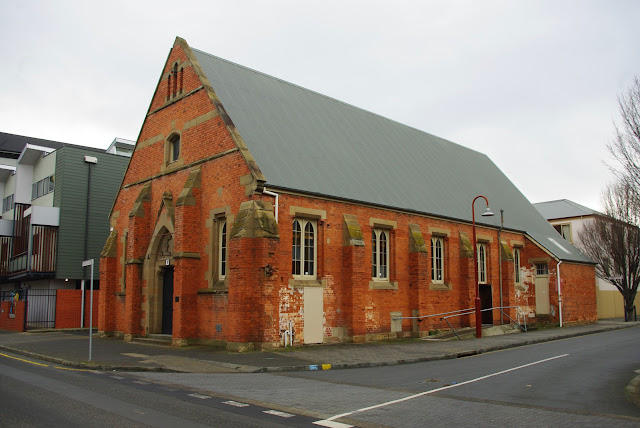 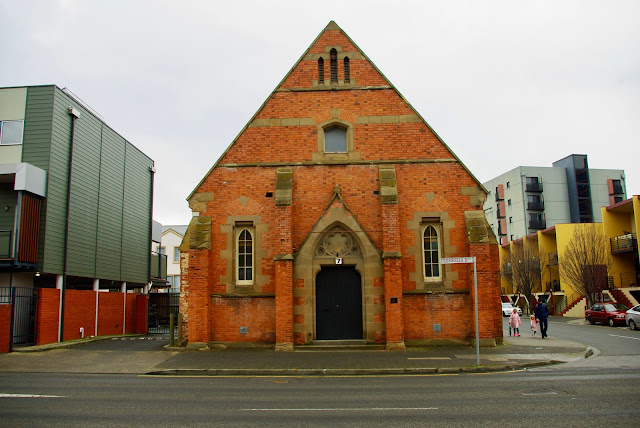 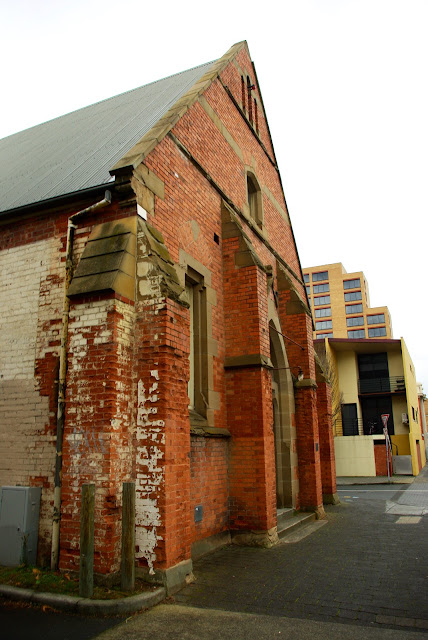 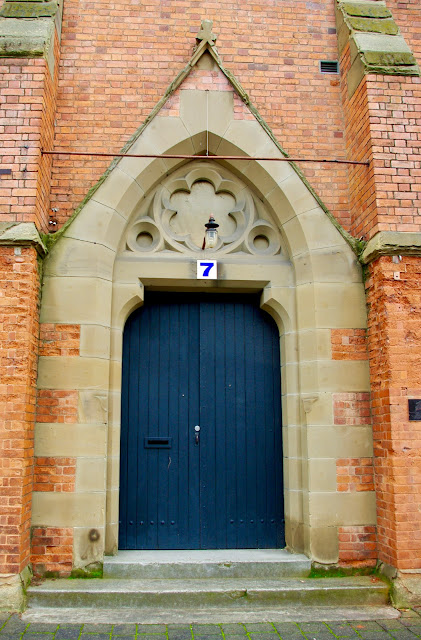 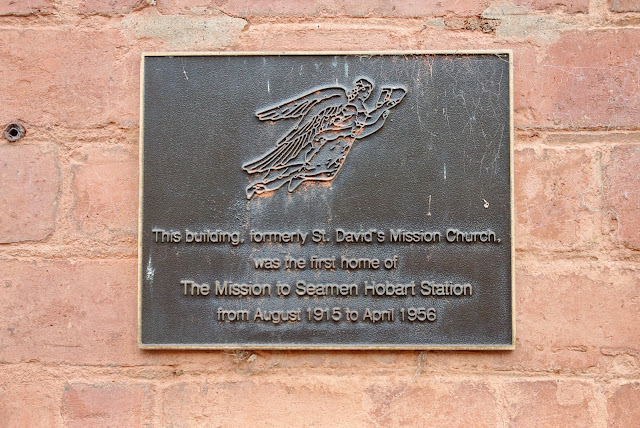 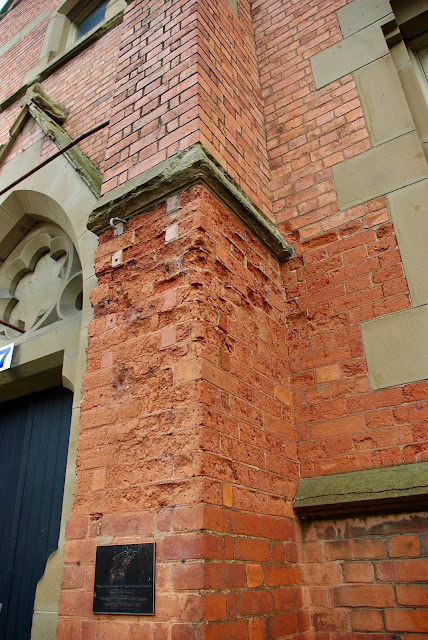