- January 29, 2022
Wesley Hall, which is located on Melville Street, was constructed as a chapel in 1826. This makes the building the second oldest Methodist Church in Australia and the oldest surviving Methodist place of worship. In 1840 the chapel was replaced by a new church built alongside Wesley Hall.
A public notice published in the Colonial Times and Tasmanian Advertiser provides a few details concerning the chapel’s opening on Sunday 19th February 1826:
“The Melville-street Chapel, being now completed, Public Worship will henceforth be performed in it on Sabbath-Days, at Eleven o'Clock, in the Morning, and at Six in the Evening; and also every Wednesday Evening at Seven o’Clock. On the occasion of its Completion, two Sermons will be preached next Sunday, at the usual Hours of Worship, by the Reverend B. Carvosso; when Collections will be made to assist in defraying the heavy expenses incurred in the erection of this Public Building. As there is a very considerable Debt on it, borne gratuitously by the Trustees, they look with Confidence to a Benevolent Public for that liberal Support which their Circumstances require. N. B.- A large Portion of the Chapel is occupied by Free Sittings for the Poor; and the Trustees avail themselves of this Opportunity of earnestly and affectionately inviting them to attend the House of God, and hear the things that belong to their peace”.
After its closure in 1840 the old chapel became the home of the Van Diemen’s Land Mechanics Institute, the first Institute established in Australia. The front of the original building was extended at some point while occupied by the Institute. In 1871 the Mechanics Institute folded due to financial difficulties. Following this the building was used for a variety of purposes. In 1927 Wesley Hall became the home of the Wesleyan Museum, which conserves Tasmania’s Methodist heritage, including records and artefacts from Wesleyan, Primitive Methodist and United Free Methodist churches.

“The history of Wesley Church dates back 120 years. In 1820, as a result of representations made to the Methodist Church in England by the Rev. Samuel Leigh, of New South Wales, the Rev. Benjamin Carvosso, acting under instructions from the Wesleyan or Methodist Mission Board, while on the way to Sydney, called at Hobart, and laid the foundation of Methodism in Tasmania. From the steps of the Hobart Town Court House, now the Tasmanian Government Tourist Bureau, he preached the first Methodist sermon delivered in the colony.

Some months after his visit Mr. Benjamin Nokes, with whom was associated Cpl. Waddy, called together those interested in the formation of the Methodist Church in Tasmania. This meeting was held on October 29, 1820, at a house in Collins St., and was attended by eight persons. Cpl. Waddy was appointed the first leader of the young society which was formed, and seven members were enrolled.

In May, 1821, the first Methodist Sunday school was formed at Hobart with 23 scholars, and the first superintendents were Messrs. R. Household and J. Hiddlestone. A day school also was established. In August, 1821, the ship Brixton, on her way lo New South Wales from England, called at Hobart and among her passengers were three Methodist missionaries - The Revs. S. Leigh, W. Horton, and W. Walker. In view of the need for a resident minister, Mr. Horton agreed to remain and assume the administration of the infant church.

A site for building purposes was granted to Mr. Horton by Lieut.-Governor Sorell, but as it was not suitable a site offered by Mr. David Lord In Melville St. was accepted and the building of the first Methodist chapel was begun.

In the meantime services were being carried on in a carpenter's shop in Argyle St. The foundation stone of the chapel, the forerunner of the present Melville St. church, was laid in 1822, but construction was hindered by lack of funds.

Mr. Horton was succeeded by the Rev. R. Mansfield in 1823. The latter, was able to secure the assistance of the Government and the building of the chapel was continued. In 1825 Mr. Mansfield was succeeded by the Rev. B. Carvosso, who had conducted the first Methodist service in the colony. Early in 1826 the first Melville St. Chapel was completed and was opened on February 12 by Mr. Carvosso.

In 1828, in recognition of the work of the Methodist Church in Hobart, Lieut.-Governor Arthur made a grant to the church of two acres of land. This was subsequently sold, and the site on which the present church stands was purchased.

On completion of the chapel Mr. Carvosso established a second Sunday school in Harrington St., and in the last year of his ministry in Hobart there were 156 children at the school and 12 teachers.

The Rev. J. Hutchison was sent to Tasmania as Mr. Carvosso's successor, but his ministry was short, and in 1832 he gave place to the Rev. Nathaniel Turner. The latter had visited Tasmania in 1822 and was known to the adherents in Hobart. For a time Mr. Turner carried on the work of the church unaided. The Rev. J. A. Manton joined him, and the two ministers, with the aid of a band of devoted local preachers, laid the foundation of Methodism in the settled parts of the island. Mr. Turner's successor was destined to become a notable ecclesiastical pioneer of Australia. This was the Rev. Joseph Orton, who in 1836 conducted the first public religious service in Melbourne.

In February, 1836, the establishment of Tasmania as a separate district was decided on. It was constituted by four ministers, the Revs. J. Orton, W. Simpson, J. A. Manton, and W. Butters, with Mr. Orton as chairman. During Mr. Orton's ministry the Hobart circuit alone increased to "upwards of 20 townships, …where the ministry of the church was regularly exercised.

In 1837 it was felt that the time had come for the building of a new church, and on December 27 of that year Sir John Franklin, as Lieut.-Governor, placed in position the foundation stone of the present Melville St Church”. 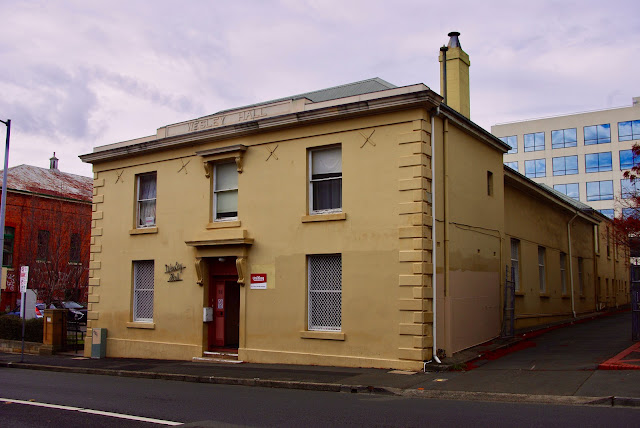 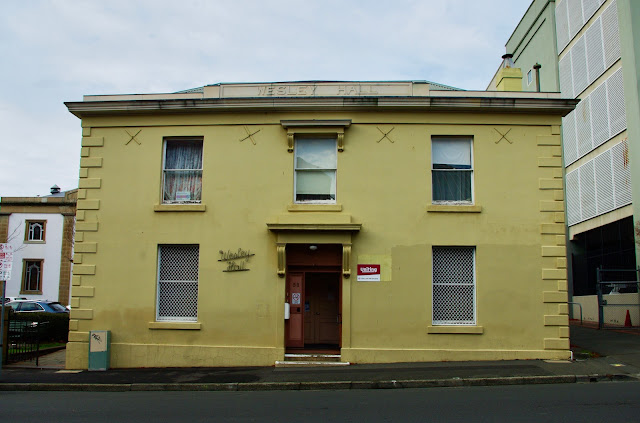