- January 22, 2022
Granton is a suburb of Greater Hobart and is situated approximately 20 kilometres north of the city centre. Originally known as South Bridgewater, it was renamed as a tribute to Charles Henry Grant, one time General Manager of the Main Line Railway which opened in 1876.

There is very little information available about St Peter’s chapel. The site of chapel and its cemetery are barely noticeable off Granton Main Road. In ‘Our Heritage of Anglican churches in Tasmania’, Dorothea Henslowe records that a chapel was licensed at Bridgwater South in December 1846.

Another source of information about the building is found in Irene Schaffer’s article “The Story of the forgotten St. Peter’s Church of South Bridgwater”. Schaffer writes that the chapel was situated on a portion of 30 acres of land granted to former convict, William Mansfield, at the Black Snake Run:

All that remains of the Mansfield “family vault” is a wrought iron fence enclosure. There were about 30 burials in the cemetery but only one headstone remains, that of Richard Rayne, who died in 1870.

By the early 1860s the church building was rented for use as the South Bridgewater School. A report from 1884 contains a description of the former church’s appearance and its dimensions. By this time it was in a serious state of disrepair. Most of this rather interesting report is reproduced here:

“This property belongs to the Episcopalians; the building was originally erected for a place of worship. The size of the room in which the children assemble for instruction is 27ft. by 10ft. When you enter it you see the walls coloured with a dingy brown, more or less stained, and the damp rising up the walls to the height of 4ft. in places, the plaster more or less broken from the wall. Some of the windows are broken, and paper pasted up to keep out the wind. If you look heavenward you will see the celling stained by leakage from the roof; look again at the floor and you see the boards partially curled in places, an evident sign of damp, and may be water underneath. A portion of the floor in front of the fireplace has either been worn, burnt, or rotted away. When heavy rains takes place the water floods into the back door, through the passage, and into the schoolroom. This arises from the building being situated at the foot of the hill and deficient drainage at the back of the building. The whole appearance of the room is dilapidated, sombre, and miserable, and in this room for the last six months an average attendance of 18 precious little souls meet for instruction. No fire can be lighted when any wind is blowing, consequently the poor children are starved with cold….I understand that the churchwardens have applied to the Board of Education to have the premises put into thorough repair, and that the board has consented, and that a tender is to be, or has been issued…”.

When I visited the the site of the cemetery and chapel in 2021, the block had been cleared in anticipation of its sale by the Anglican church, which rather surprisingly still owns the land after 175 years. Fragments of the chapel’s foundation are visible near the front of the site.

Of the 31 burials at the site, 17 are children. Apart from William Mansfield and his wife Marie, little information exists regarding the other graves. However, I have found interesting articles relating to the deaths of two of the cemetery’s inhabitants: Richard Rayne (1870) and Henry Lloyd (1873).

“A very sudden death occurred at Bridgewater on Monday forenoon. Mr Richard Rayner, aged 71 years, and a settler in that neighbourhood for nearly 40 years, rose on Monday morning in his usual health, and that (for an aged man) was excellent and proceeded about half-past ten o’clock to his usual avocations on his farm. One of his sons was in his company. After labouring some little time he complained of great pains in his chest and weakness. He recovered in a few minutes sufficiently to get home with the assistance of his son, and was sitting down in an armchair taking a drink of tea, when he suddenly expired without a word or struggle”.

“At about a quarter past two o’clock on Monday a man named Henry Lloyd who was employed at the railways works at Bridgewater, was accidentally killed. Deceased was employed as a navvy on the sub-contract at Bridgewater, and was engaged undermining a bank, when a large quantity of earth suddenly fell down, throwing the unfortunate man to the ground. Arrangements were speedily effected for Lloyd’s removal to hospital, but he died about twenty minutes after the occurrence. On examination of the body, it was found that one leg was completely smashed, and the back appeared to have been broken. The body was subsequently removed to the Bridgewater Police station to await a Coroner’s inquest. Lloyd has left a wife, who is supposed to reside near the Rainbow Inn, on the New Town Road. He formerly worked at the coal pits”. 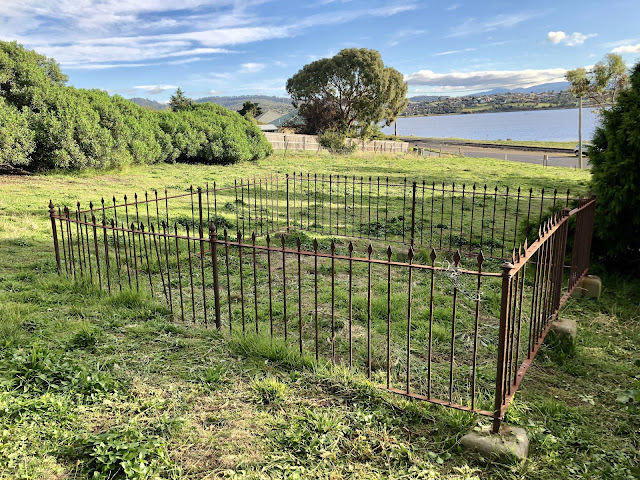 All that remains of the Mansfield 'family vault' is this wrought iron enclosure.