- April 22, 2022
This entry is the next in a series of articles concerning buildings associated with some of Tasmania’s most significant churches. These buildings include Sunday schools, parish halls, convents, schools and residences of the clergy. Ancillary buildings are often overlooked and are rarely featured in published histories. My aim is to create a simple record of some of the most significant of these buildings, including some which no longer exist.

St Paul’s Anglican Church at Glenorchy replaced an earlier wooden church which had stood on the site since 1847. Planning for a new church began in 1867 and within two years a foundation stone was laid by Governor Du Cane at a ceremony led by Bishop Charles Bromby. The church was “completed sufficiently” for divine service and consecrated in June 1870. In 1893 a Sunday school room was built across the road from the church. The Hobart Mercury’s report of the official opening of the Sunday school room, on Wednesday 8 March 1893, provides details of about the buildings design and function:

“There was a good muster of friends of the Anglican Church at Glenorchy yesterday afternoon, when a new Sunday schoolroom and lecture-hall, in connection with St. Paul's Church, was formally opened by Bishop Montgomery. The weather turning out fine, the occasion proved a very enjoyable festival. The need of such a building has long been felt by the incumbent and his congregation, the Sunday-school having for many years to be held in the church itself. At length the idea of raising money to provide a schoolroom was mooted by two or three prominent supporters of the church, who offered donations. Subscriptions and contributions were gradually obtained, until a sufficient sum had been secured to justify them in commencing to build”.

“Mr. Fagg, architect, kindly prepared the design and specifications free, and the contract was let to Messrs. Corney and Keighley, who have put up a very comfortable and ornamental wooden structure, nicely lined and plastered on the inside, and capable of accommodating about 250 people. There are also behind the platform two small rooms which will admirably serve as class-rooms, and prove useful when entertainments are given. The cost has been £215, of which sum £140 has been raised, leaving £75 to be yet got, whilst some school furniture, etc., is also much needed. Mrs. Donald Cameron has set others an example by presenting a pianoforte to the room, a present which is much esteemed….”.

“The proceedings in connection with the opening consisted of devotional exercises and addresses in the new building, after which tea was served to the visitors in the ante room, and to the school children on the sward outside. A plentiful supply of tea, cake, and fancy pastry of all kinds was provided, together with a band of music, at the expense of Mrs. Donald Cameron, the caterer being Mr. G. B. Dean, of Launceston”.

“The addresses were commenced by the incumbent (Rev. H. Heineken Marten) giving a short account of the efforts which had been made to get the building erected. For 55 years the church had stood alone without any such building, and he thanked God that at last it had been provided, for it would help them in many ways. Confirmation classes and Sunday-school work could be carried on therein, lectures delivered, and entertainments given, all of which would tend to draw the people more unitedly together…. He thanked all who had come forward to help, and be hoped their Hobart friends would help them in clearing off the debt which remained. He was sure they would when they saw how the people of St. Paul's, Glenorchy, were trying to do all they could for themselves. The Bishop expressed his great gratification at seeing the building put up, and spoke of the opportunities it afforded them for instruction and recreation. He was very glad indeed that now the work of Sunday-school touching would be taken out of the church. He trusted that their Sunday-school would develop in the new building.… He then formally declared the building opened”.

“Subsequently the school children were made to sit in a circle on the grass in the enclosure, where Mrs. Heineken Marten and a number of other ladies served them with tea, cake, and other good things ad lib., the Brighton Brass Band serenading them the while. After tea and games were indulged in by the children, and the pleasant little afternoon's festival ended".

As can be seen from the photographs, the building is now in use as commercial premises and is not in a good state of repair. The building should be of heritage significance as the architect George Fagg, designed many significant buildings in Tasmania, including the Hobart Baptist Tabernacle. 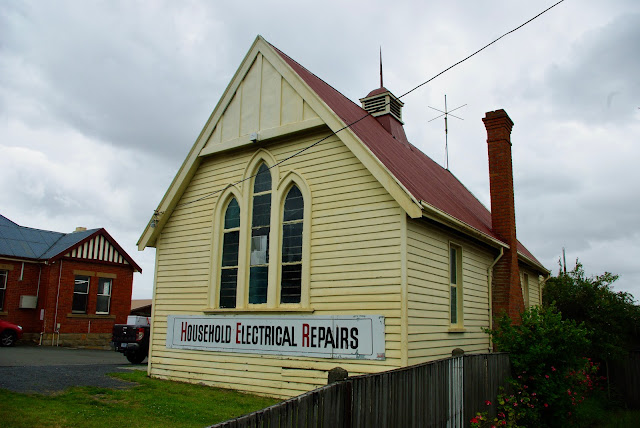 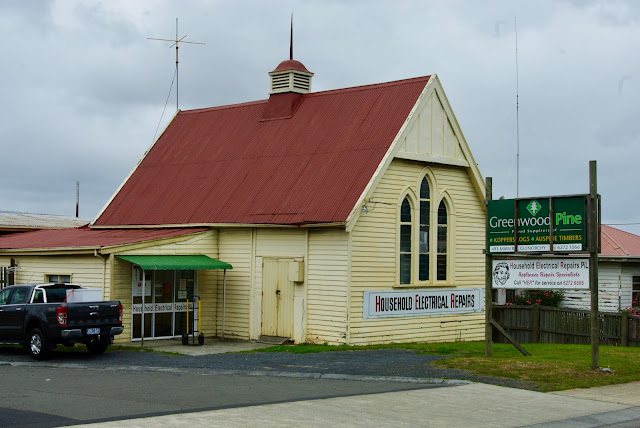 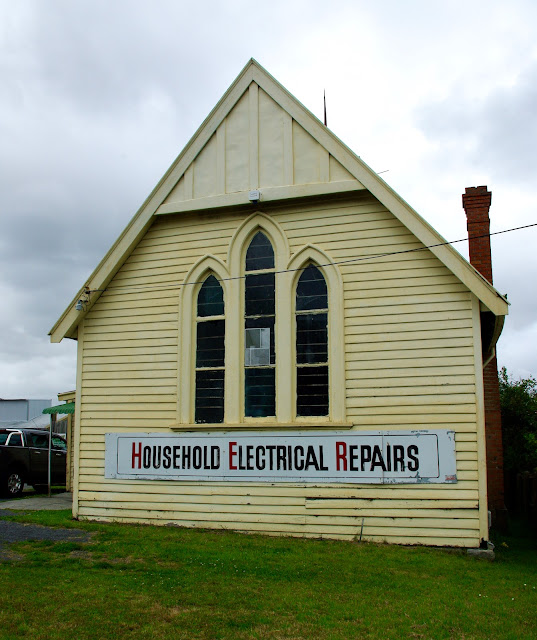