- April 25, 2022
This entry is another in a series of articles concerning buildings associated with some of Tasmania’s most significant churches. These buildings include Sunday schools, parish halls, convents, schools and residences of the clergy. Ancillary buildings are often overlooked and are rarely featured in published histories. My aim is to create a simple record of some of the most significant of these buildings, including some which no longer exist.

Sorell is one of Tasmania's oldest towns with the Pittwater district being settled in 1808. Sorell was formally established as a township in 1821 and was thereafter named after William Sorell, who served as Lieutenant-Governor from 1816 to 1824.

In 1894 the Hobart Mercury reported that the “corner stone” of St George’s Sunday school was laid on Wednesday 8 August by Mrs Montgomery, wife of the Bishop of Tasmania.

The building, known as the “St George’s Memorial Sunday School” was officially opened on Friday 12 October 1894. The Mercury provides the following details:

“This school, erected at Sorell in memory of the late Miss A. B. Garrett*, was formally opened on the 12th inst., the Rev. C. J. Brammall and Rev. Mr. Pointon conducting a short dedicatory service, at which 150 children and 50 adults were present. The Rev. C. J. Brammall gave a brief history of the erection of the edifice, and mentioned that the community were largely indebted to Mr.s R.C. Crocker for the kindly aid she had given towards the object. The building, 40ft. x 20ft., is built on a solid stone foundation [and] best Tasmanian hardwood, lined throughout with tongued and grooved pine”.

“The porch doors open outwards in conformity with rule. The windows are mullioned, and afford ample light; the ventilation perfect. The seating accommodation is calculated at 200 children. Mr. G. H. Read supplied the design, and the Messrs. Duncombe Bros., who were the contractors, have most faithfully carried out the work entrusted to them. On the conclusion of tho service an adjournment was made to the institute, where a tea was provided by the ladies who had so successfully acted as a committee on the previous day on the occasion of. the Rev. C. J. Brammall’s farewell. The young folks enjoyed themselves immensely”.

The undated black and white photograph of the building shows the original hall before it was extended in 1927. The building was also used as St George’s Parish Hall. It presently houses a tourist information centre.

* Annie Balfour Garrett (1848-1894) is reported to have died of typhoid at the parsonage at Sorell. Annie Garrett seems to have had a connection to Rev. Brammall, as she left him an amount of £350. The year before her death she published “Her Heart’s Desire (A Temperance Tale). 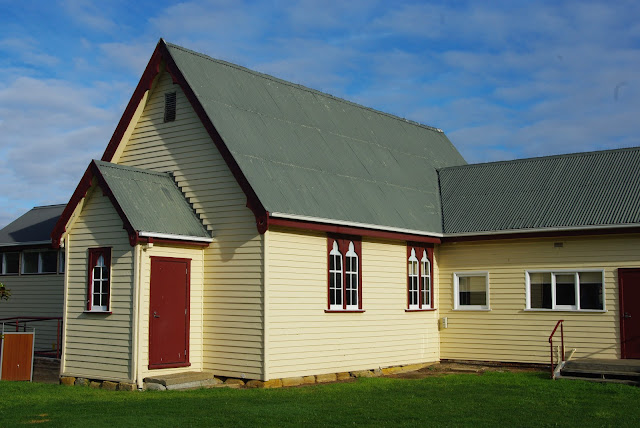 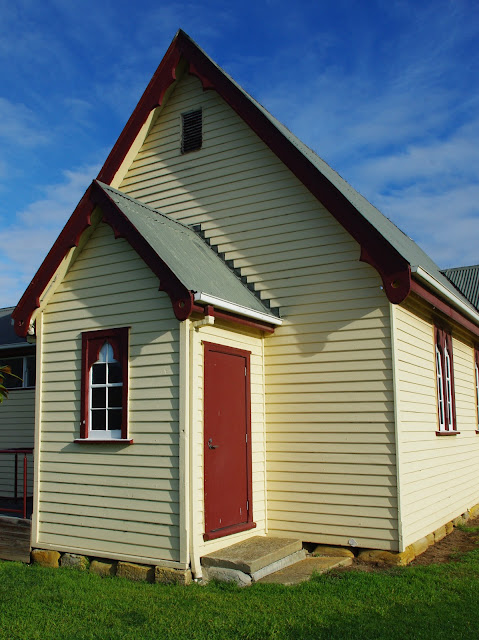