- May 13, 2022
Cooee is a small seaside town contiguous to the city of Burnie. The name “Cooey Creek” is recorded on an early map before the area was first settled in the 1840s by the Byrne and Morris families. Cooee Creek remained relatively undeveloped until the close of the 19th century, probably because the coastal land was not suitable for farming. By the 1890s several small manufacturing businesses were established at Cooee Creek, laying the foundation for Cooee’s development as a manufacturing and residential settlement.

Cooee’s first Anglican church, St David’s Hall, was a temporary church used for about 10 years before it was replaced by a new brick church in 1932. The church was an old hall removed from Burnie where it had been built as a Sunday school in 1883. It also served as Burnie’s Anglican church for a short period before St George’s opened on the Mount Street site in 1885.

In November 1921 the Burnie Advocate reported that plans were underway to establish a church at Cooee:

“The Coo-ee Anglican Church people have purchased the old parish hall at Burnie, and propose to remove it to Coo-ee at an early date. It is necessary to clear a site, and with this object in view a working bee has been arranged…”.

The hall’s removal was completed by early February 1922:

“The work of re-erection and improvement of the building has been done in a highly satisfactory manner, and the hall presents a fine appearance, standing as it does on an elevation in full view of the main road, yet sufficiently far from it to be beyond the annoyance of dust and noise of the passing traffic, … the site for the hall was the gift of Mr. and Mrs William Boston, and sufficient has been given to allow for the erection of a permanent church, when possible, adjoining the hall. The cost of the hall, and its re-building and improvement, fencing, etc., will be in the region of £350, and of this sum £205 have already been raised, the balance being on loan”.

“The new Church hall erected at Coo-ee on the site presented by Mr. W. Boston, was opened for the dual purpose of a place of worship, and also a social hall, this week the first services being held on Sunday…when the Rector (Rev. W. G Thomas) officiated at the morning service of the Holy Communion, and the Rev. Archdeacon Richard in the afternoon. The latter service was one of benediction of the hall generally, and the dedication of the little sanctuary which has been built as an annexe to the end of the building. Unfortunately, the furnishings of the latter, which are very complete and handsome, did not arrive in time for the dedication service, but have since come to hand. They consist mostly of gifts from various members of the congregation….”.

St David’s Church Hall was used as a place of worship until 1932 when a permanent brick church was built alongside it. [see No. 515]. The hall continued to be used as a Sunday school and for social purposes for many years. The old hall remained on the site until the 1980s. The date of its removal is not know.
The only photograph of the hall available in the public domain shows the building alongside St David's church. I am hopeful that a better photograph of the hall exists and may surface as a consequence of the publication of this article. 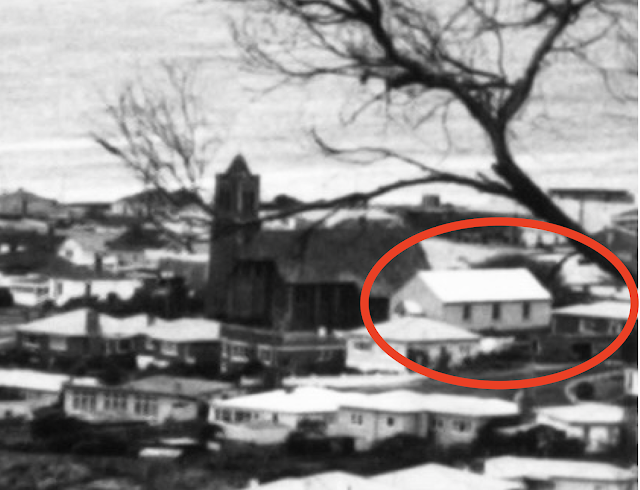