Since the Salvation Army established itself at Burnie in the late 1990s, the denomination has ‘occupied’ three halls in the city.  This article’s focus is on the first Salvation Army Hall, which was established in a former Wesleyan church on Cattley Street [see No. 537].

The information in this article is largely drawn from ‘Burnie - A Thematic History’, a publication produced by the Burnie City Council in 2010.

“The Salvation Army had an ‘unfortunate introduction’ to Burnie. In the late nineteenth century, Captain Tom Gibbs and his wife arrived in northern Tasmania, and established a local Corp. The Burnie headquarters were set up in the Primitive Methodist Chapel in Mount Street. The services of Captain Gibbs and his wife found a ready audience, however it was later discovered they were frauds and not connected with the Salvation Army, leading to the closure of the Chapel. Gibbs was later arrested for bigamy”.

“The scandal caused by Gibbs’ actions set back the cause of the Salvation Army in Burnie. The genuine Salvation Army established their operations in Burnie in 1900, as an outpost of the Wynyard Corps. The group was headed by Captain O’Brien, who was the first female preacher in Burnie. Operating from a temporary site in Mount Street, the Salvation Army struggled to find a permanent site. The Salvation Army borrowed £100, and in 1910 purchased the empty Wesleyan Chapel in Cattley Street. Due to a lack of funds, the debt was not paid back until 1932”.

“By 1951, the existing site was proving too small for the needs of the Army, and land was purchased in Ladbrooke Street for the construction of a new Citadel. The new building was constructed between 1954-1955, with more than £2000 raised towards its construction. The building was erected by local members of the Army, opening in 1956 and acclaimed at the time as one of the most modern in Tasmania. Although able to meet worship needs, the Ladbrooke Street site was too limited to provide the social welfare services of the Salvation Army and in 1977 a site was purchased in Wilson Street”.

After the Cattley Street site was sold in 1955 the building housed the Burnie Country Women’s Association and has also been used as commercial premises. In 2015 it became the home of “The Chapel”, a cafe, bar and music venue. The building has remained remarkably unaltered since it was built 125 years ago considering the variety of purposes for which it has been used. 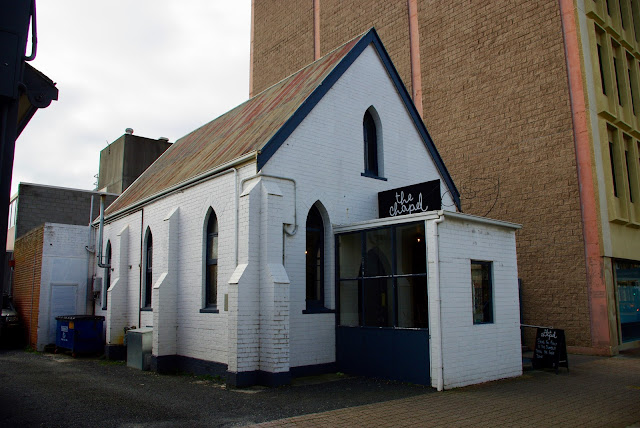