- December 01, 2022
The Frederick Street chapel was a temporary place of worship used from 1839 until 1842 when it was replaced by “St John’s Square Chapel”, now known as Milton Hall.

The Frederick Street Independent Chapel was established following a split in the congregation of Charles Price’s Tamar Street Chapel. The new congregation initially met in the Frederick Street Infant School which had opened in 1836. The congregation was led by Reverend John West. West arrived in Tasmania in 1838, having been sent by the Colonial Missionary Society to engage in mission work in the northern districts of this island. West preached in Launceston, where his “gentle winning manner and his deep thoughtful teaching won him a group of followers”.

In mid 1839 a small wooden chapel was opened on Frederick Street on a site close to what is now the City Mission. The building acquired for use as a chapel was even “then considered an old one, ….erected in another part of the town ….[and] purchased and removed on wheels to the allotment in Frederick-street, where it was converted into a chapel”.

The chapel opened for worship on Sunday 1 September 1839. The Launceston Advertiser carried a brief report on the opening:

“On Sunday last the Independent Chapel, lately erected in Frederick-street, Launceston, was opened for Divine Service. The Sermons on the occasion were preached by the Rev. H Dowling, Baptist Missionary, and the Rev. John West, of the Colonial Missionary Society. We understand that the congregational church connected with this place of worship, stands in union with, and has been recognised by, the Van Diemen’s Land Congregational Union, at Hobart Town”.

The chapel was used for about two years and was vacated following the opening of St John’s Square Independent Chapel in 1842. The building was then rented for use as a “Commercial and Elementary Academy for Young Gentlemen” and thereafter used as a dwelling.

The chapel was demolished in 1885 as recorded in the following report published in the Launceston Examiner:

“Amongst the old buildings recently ordered, by the Municipal Council to be demolished as being unfit for habitations is one that has played a somewhat conspicuous part in this good town of Launceston. We allude to the old building, the gable end of which fronts on the north side of Frederick-street, adjoining the primitive Methodist Chapel, and about midway between Charles and Wellington streets….”. 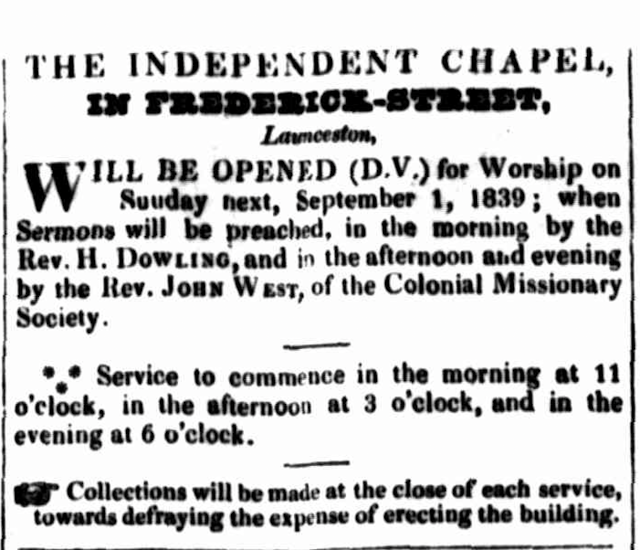