- December 15, 2022
This article is one of a series about buildings associated with some of Tasmania’s most significant churches. These buildings include Sunday schools, parish halls, convents, schools and residences of the clergy. Ancillary buildings are often overlooked and rarely feature in published histories. My aim is to create a simple record of these buildings, including those that no longer exist.

Battery Point is an historical inner suburb on the east side of Hobart, fronting onto the Derwent River. The suburb’s name is derived from Mulgrave Battery was established in the 1818 for coastal defence purposes.

St George’s Anglican church is one of Hobart’s most photographed churches. However, the St George’s Sunday school, which is situated next to the church, receives almost no attention from photographers or historians.

In January 1906 it was decided to build a new Sunday School on land recently bought adjoining the old Sunday school (1851). Construction began on the new school in 1914. An article on the ceremonial laying of the foundation stone was published in the Hobart Mercury:

“St George's. Anglican Church Battery Point, is soon to have a splendid new Sunday-school building, and the first step was initiated yesterday when His Excellent Sir William Ellison-Macartney laid the foundation-stone. St George's Church is one of the most picturesque of Hobart's sacred buildings and the site of the new Sunday school commands a perfect idea of the city and harbour and it is adjacent to the church. Methods of imparting knowledge in Sunday-schools and the accommodation for the children there made as great strides of late years as ordinary education and the up-to-date day schools of the present time, and instead of one large hall, with all the classes in view of each other, the new Sunday-school which will be 64ft. by 36ft., is to be divided into separate classrooms with movable partitions, so that on anniversaries and other occasions the partitions can be folded back against the walls, and the whole building turned into one large hall.

It is to accommodate the junior and senior classes as the kindergarten is already an amply provided for in the old school, and will hold classes comprising 300 children and will seat altogether about 300 people. The contract price is £1250 but it is anticipated that by the time the building is completed early in November - the cost will be in the neighbourhood of £1,500 The comfort of the children has been a first consideration, and the school is to be well provided with heaters. Messrs Ricards and Heyward have drawn up the plans and the contract has been let to Messrs J Dunn and Sons.

His Excellency was accompanied yesterday by Lady Macartney, and attended by Major Kerr-Pearse and Captain Richardson ….There was a very large attendance, many business men being present. After an appropriate service the foundation-stone was, lowered into position…”. 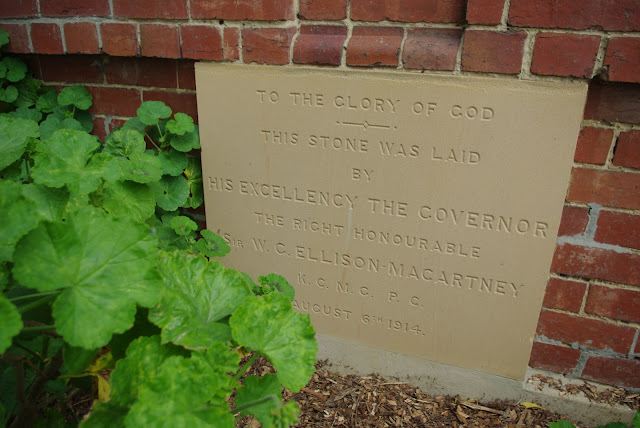