No. 444 - The Shalom Community Church at Sprent - 'Not Quite a Trinity'

- June 11, 2019
The township of Sprent lies about 12 kilometres south of Ulverstone. Sprent was originally known as Eden but the general area was better known as Castra Road.

The Sprent Uniting Church is unique in that it is a combination of three former churches as will be seen later in the article. The first of these was the “Castra Road” Wesleyan-Methodist church which was originally located about 2 ½ km south of Sprent at the site of the old Methodist Cemetery. This church opened in December 1871. A single report from the Examiner is the only record of its opening. The report describes the church as being at Upper Gawler but from the report’s description it is undoubtedly the Wesleyan Castra Road church. The report refers to the “new slab road” which ended at the junction of the Gawler Road, nine miles from Ulverstone. The slab road (made from slabs of timber) was competed at about the same time as the church. The Examiner’s Leven correspondent wrote:

“A new Wesleyan Chapel was opened for Divine Service at Upper Gawler, last Sunday week. Three services in the day were conducted by the Rev. Nye, a gentleman who possesses considerable talent for the ministerial functions. On the Monday following a picnic came off, at which a charge was made, to help to meet the expenses connected with the building. Owing to the day proving rainy, not many were present as would otherwise have been expected…. The chapel was built by subscription, and is capable of seating up to eighty persons. What was the total cost I have not heard, but I believe there is no debt remaining to cause uneasiness. The chapel is situated about eight miles from Ulverstone, on the new slab road, the site having being given by Mr Donald Marquis. And this place of worship is erected in a neighbourhood that is gradually becoming populous, we may suppose the services will be well attended”.

The area did not become as populous as was hoped and “for some time it was felt it could not render effective service to the [Sprent] community”. However the old church remained at this location until the early 1940’s when a section of it (the vestry) was removed to Sprent and was joined onto the Castra Road Presbyterian church (located at Spalford) which had been purchased by the Methodists.

The reconstructed churches were officially opened at the new Sprent site on Saturday 27 November 1943 by Reverend R.H. Howie.

The third church on the Sprent site was added in 1982. This was the old Methodist Church from Kindred which was purchased and joined to the existing churches to form the new “Shalom Uniting Church”. With the addition of the Kindred Methodist church it is likely that the vestry of the original Castra Road church was removed, which would make the composite church not quite a 'trinity'.

The Shalom Uniting Church is now the only place of worship still in use in the entire Castra Road district. 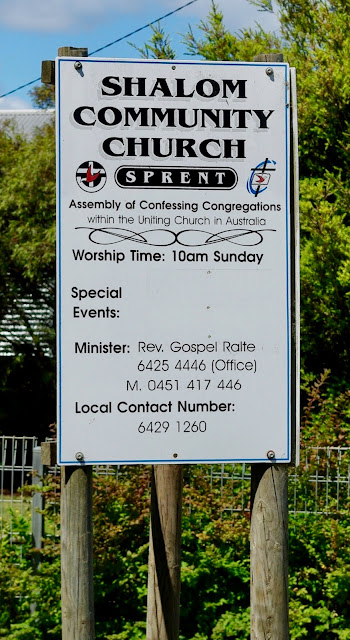 The Uniting Church Cemetery at Sprent