- September 21, 2020
Bellerive is a suburb of Hobart located on the Eastern Shore of the Derwent River. Originally it was named Kangaroo Point but in the 1830s this was changed to Bellerive, meaning ‘beautiful shore’.

St Mark’s, the second Anglican Church established at Bellerive, is situated on the corner of Clarence Street and Scott Street. The earlier church, also dedicated to St Mark, opened in 1852. It remains relatively unchanged and is to be found two blocks away in Queen Street. [see. No. 760]

The move to build a new church began on Friday 8 August 1890, when the Parish Council proposed that a new building had become necessary due to the increasing population of the suburb and “on account of the present edifice falling into decay”. It was to take over a decade of fundraising to bring the plan to fruition.

The foundation stone for the new church was laid on Saturday 21 October 1903 by the Governor of Tasmania. Construction was completed in about six months and it was opened and consecrated on Saturday 21 May 1904. The Mercury’s report on the ceremony provides some interesting facts about the building:

“The erection of the new Church of St. Mark, Bellerive, the foundation stone of which was laid just six months ago by Sir Arthur Havelock, late Governor of the State, having been duly completed the ceremony of consecrating it was performed on Saturday afternoon, 21st inst. by the Bishop of Tasmania (Right Rev Dr Mercer)”.

“The new edifice was designed by Mr North, architect of Launceston, and built by Messrs Stabb Bros, Hobart. It is a substantial and neat building of stone and brick with tile roofing is well lighted and has good acoustic properties. Centrally situated on rising ground on the Clarence road, it commands a picturesque view of landscape and sea. The building is 60ft in length, 28ft in width, and has seating accommodation for about two hundred. The area of land reserved for the church is 1 rood 7 perches. It is neatly fenced, but the ground has yet to be laid out. The cost of the building to date has been £1,007. That amount, with the exception of £250, which was borrowed, was raised chiefly through the instrumentality of persistent and patient effort extending over several years on the part of residents of Bellerive. The credit for that is of course very considerably, if not almost wholly, due to the ladies who so largely interested themselves in the movement by getting up fairs, etc, as a means of obtaining funds….”.

“The weather on Saturday afternoon was cold and damp but notwithstanding that the consecration ceremony was largely attended, the building being quite crowded. Amongst those present were His Excellency the Lieutenant- Governor, Sir John Dodds, and Lady Dodds, accompanied by Mr Warren Dodds, Private Secretary. The Bishop was accompanied by Mrs Mercer…”.

Adjoining the church is a magnificent Sunday school hall. This was opened by Bishop Snowdon Hay on Wednesday 30 May 1928. The Mercury again provides some interesting details about this building:

“The hall is a handsome brick building, designed by Mr. Lauriston Crisp on the basis of sketch plans by Mr. Alfred Middleton, and built by Messrs. Denholm and Bignell. The main hall measures 30ft. by 30ft; the stage 20ft. by 13ft.; and the kindergarten room 30ft by 23ft. A roomy kitchen and cloak and dressing-rooms are provided. The inside of the building Is finished with clinker-brick dado and frieze, and the rest of the walls is coloured in cream…. At the back of the stage is a fine window in stained glass, showing the setting sun on the sea. The window was given by Mr. John Moore in memory of his brother, a sailor, who died In the Great War”.

The black and white photograph used at the head of this article shows the original church as it appeared in 1904. My photographs of the church taken earlier this year reveal the extent to which the building has been modified and extended. 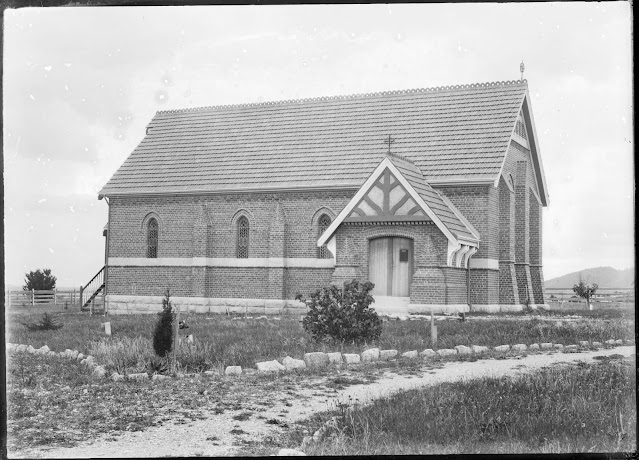 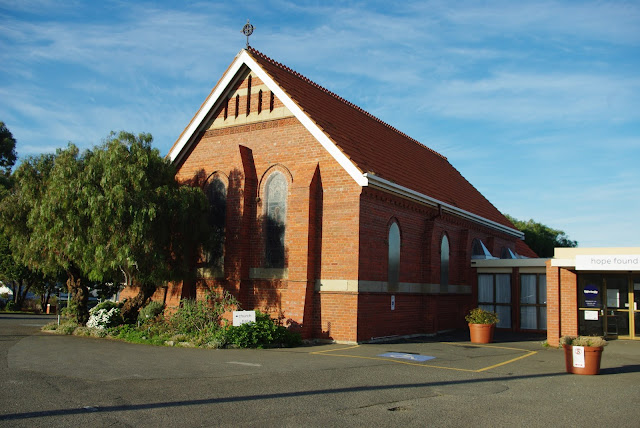 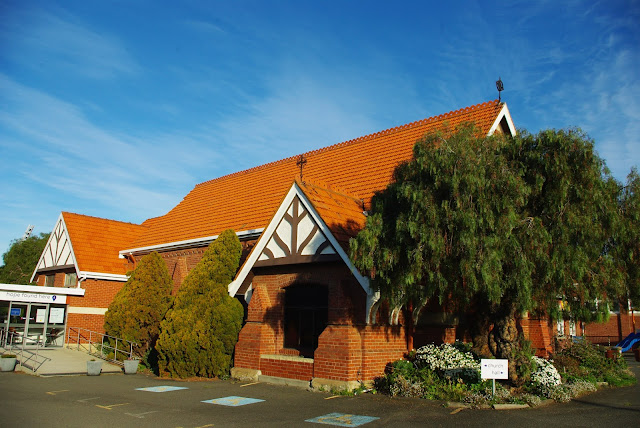 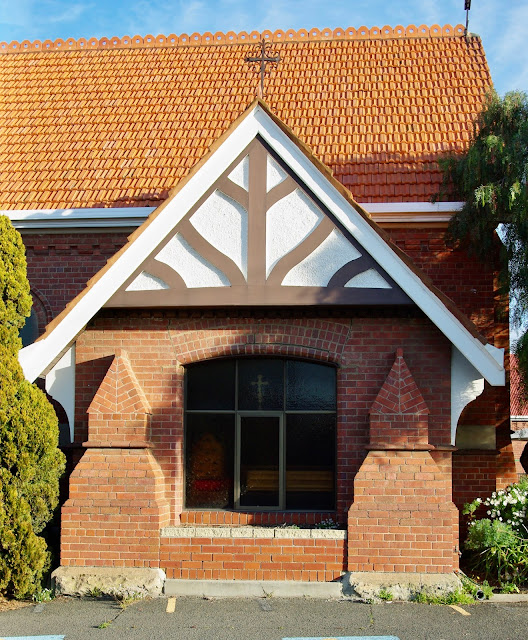 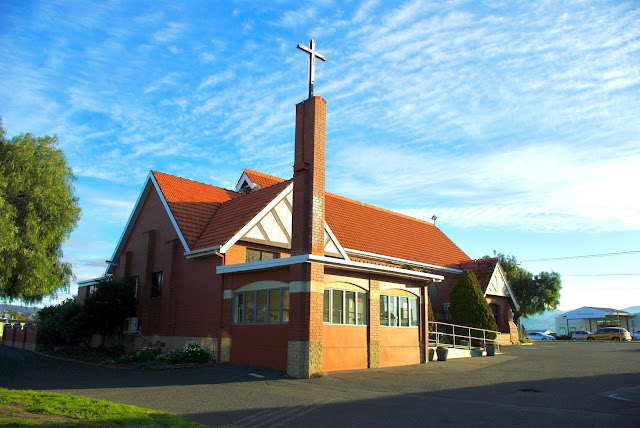 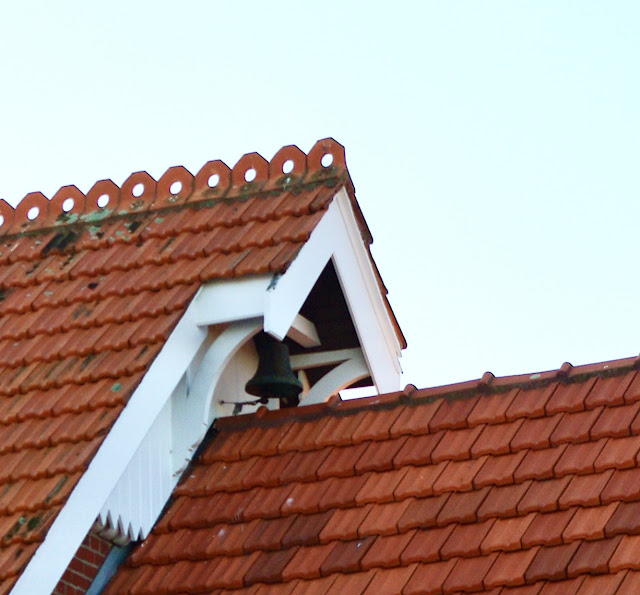 The bell, which is almost obscured by an extension to the building, was once used in the original St
David's Cathedral, Hobart. 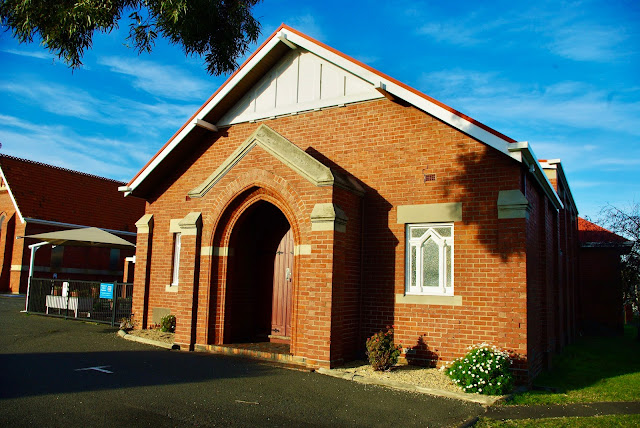 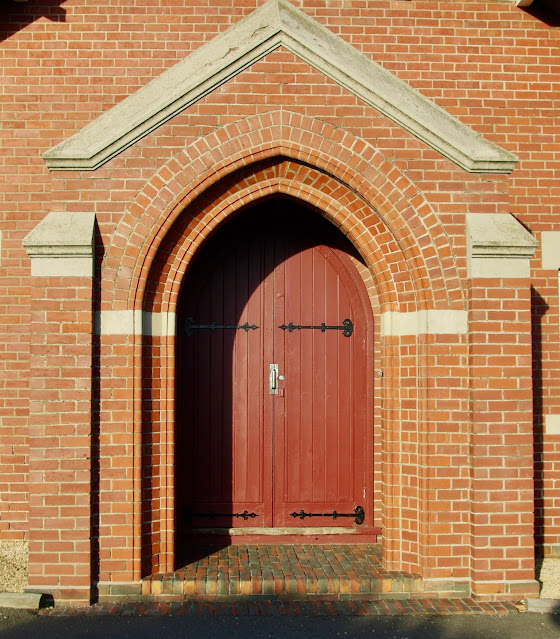 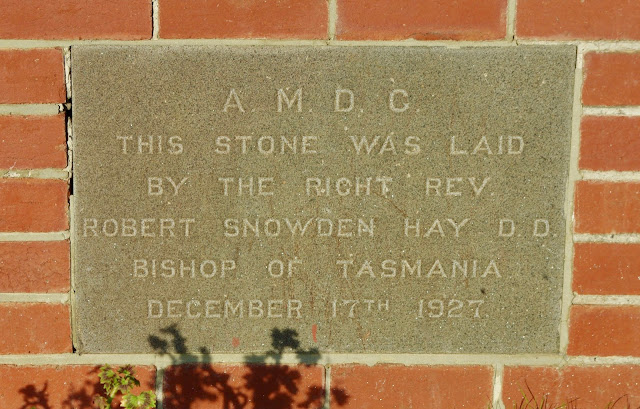